On Friday I wrote about Maine's new Tea Party governor's decision to remove murals depicting aspects of LABOR from the LABOR department offices.  He didn't wait long.  Over the weekend, workers (Yes, laborers) removed them and they're now in storage somewhere.  This is what the walls look like now:

This is what adorned them before the weekend: 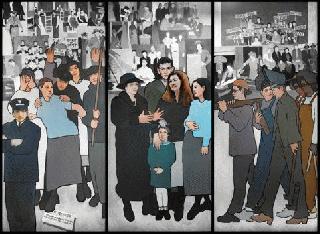 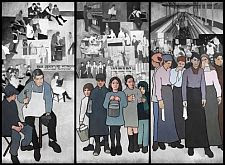 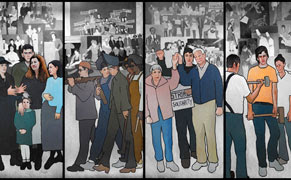 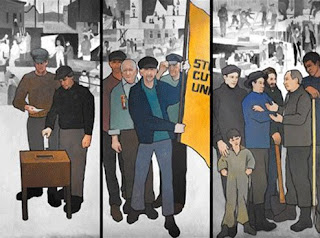 These are the murals in their entirety:

The decision apparently was made on the strength of one letter to the new governor.  The letter-writer pleaded with the governor to "TEAR DOWN THAT MURAL!"  He/she wrote, "I felt for a moment that I was in Communist North Korea where they use  murals like these to brainwash the masses."After praising the governor for his candor, the letter-writer bravely signed off as "A secret admirer".

Amanda Terkel wrote about the governor's decision today in the Huffington Post:

On Friday, LePage's office sent out a press release asking for new artwork "that depicts the cooperative relationship that exists between Maine’s job creators and the workers who power Maine’s economy" that can be displayed in the Labor Department's administrative offices and in the lobbies of career centers around the state.
In addition to the mural being removed, LePage's office also ordered the names be changed on eight rooms in the Department of Labor, many of which commemorate former labor leaders and one of which honors the first female U.S. Cabinet secretary.
LePage's office originally said that the governor made his decision after complaints from businesses owners, eventually pointing to a single anonymous letter, in which the author said that when looking at the mural, he or she felt like it was something from "communist North Korea."
In an e-mail to The Huffington Post, Bennett also pointed to a Sunday blog post by Mike Violette, a conservative radio host in Maine, along with other anonymous statements from employers who support what LePage is doing and believe the mural has helped make the Department of Labor a "militant, angry, business-hating environment."

So after looking at the murals above, do you see what they see?  I'm not seeing it, either, but then I'm not looking for any excuse to take down labor.  Removing those murals was meant as a stick in the eye to workers everywhere.   I wonder why nobody picketed those offices?  Why were there no crowds 10-deep in front of the door, forcing authorities to bodily move them out of the way before those murals could come down off those walls?  Where were the chants, the songs, the signs?  Where were the cameras?  The reporters?  Don't they do things like that in Maine?

I was wrong when I said the murals would be stuffed into a locked bathroom in a gas station down the street.  There's talk of placing them in the Portland City Hall now.  Rep. Ben Chipman , an Independent whose district surrounds Portland, and who fought to keep them displayed somewhere in a public building, said this:

“While I do not agree with the governor’s decision to remove the mural, locating it to the site of the original Maine State House where it can be on public display and continue to be owned by the people of Maine will allow it to receive the recognition and appreciation it deserves."

Portland is some 65 miles south of Maine's capital, Augusta, and at 230,000 population is the largest city in Maine.  There's some consolation in that, but really--what was so terrible about murals depicting various aspects of labor hanging on the walls of the state Labor Department?

In any other time this could never have happened.  Not in a public building. The last time murals were stripped from walls under protest in this country was in 1933, when Nelson Rockefeller demanded that Diego Rivera remove an image of Lenin he had painted into a mural he was working on at Rockefeller Center.  Rivera refused, and the mural was covered with tarps and destroyed in 1934.  There was a significant outcry against the destruction of those incredible artworks, and even now there are people who can't talk about it without choking up. 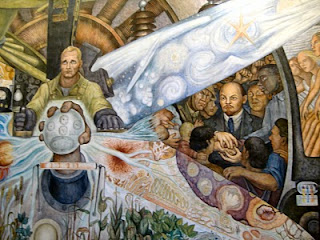 I met two of Diego Rivera's assistants, Lucienne Bloch and Stephen Dimitroff, when I did a story in 1986 on their return to the Detroit Institute of Arts to lecture about their work on the Rivera murals there.  Lucienne took the last photos of the Rockefeller Center mural before it was covered over and locked up out of sight.  When we talked about what had happened that last day in New York in 1933 before they were escorted out of the building, the two of them could barely talk about it.  It had happened 52 years earlier and the wounds were still festering.

The two fell in love in New York while they worked on the ill-fated Rockefeller Center frescoes. After seven months of work the murals were almost completed when Rivera, an avowed Communist trying to get back in the good graces of the party, painted the head of Lenin into one prominent scene. The sponsors protested, but Rivera refused to remove it. All work stopped and the murals were eventually smashed to bits.

As Dimitroff and the other assistants ground colors and applied the five coats of plaster needed for Rivera's style of fresco, Bloch shot roll after roll of film. Later, when the assistants got wind of the shut-down, the photographs took on a new importance. Near the end, when RCA guards were ordered to confiscate cameras, Bloch tucked her little Leica into her blouse and entered the building with Dimitroff, saying they had last-minute work to finish up. While Dimitroff pounded on boards to mask the sounds of the clicking shutter, Bloch took the final photos of the murals--including the controversial head of Lenin.

"It was insane, that destruction," Bloch said. "Ill never understand why they couldn't just cover the murals with canvas. To destroy such a work. . .and to think it could have happened to the Detroit murals, too."

The Maine Labor Department murals are not the quality of, say, a Rivera mural, but they are works of art and deserve to stay where those who originally commissioned the panels intended them to be displayed.  They were designed to honor the workers of the state of Maine.  I don't believe anybody but the governor and his henchfolk objected to them.  I don't believe these actions took place on the strength of a single, unexceptional letter.  I hope there is someone in that great state who cares enough about art on the people's walls to work at getting to the bottom of the latest of these phony Right Wing attempts to minimize the hard work and sacrifices made by working people.

Yes, there is a vast Right Wing conspiracy out there, no longer making any effort to disguise their contempt for the people who built this country board by board, stone by stone, life by life.  Let's call them what they are and then let's get them the hell out of our lives.
*
*
Posted by Ramona Grigg at 9:26:00 PM