Peace Is A Wish Our Hearts Make


As someone who wallows in politics, in opining, in making fun of those who, if I were the violent type, would be subject to ear pulls and nose-tweaking, I'm still surprised when, like clockwork, these are my thoughts at Christmas time:


Deliver me, please, from anger, from ugliness, and keep these peaceful moments coming.

You may have noticed that it's been a while since I've written about politics. (Better than a fortnight, I see.)  But I haven't been silent.  Lord, no!  I've been commenting and arguing in small doses, but until now I haven't felt the urge to write a real post.  Judging from past experience, it's only a passing phase, but it feels good not be angry at the world and all its cruelties, its craziness, its Trumps and Fiorinas, its Onward Christmas Warriors.

I expect this will go on until after the Holidays.  We've closed up our house in the northern boonies and are in the city with family and friends now. Love is in the air.  Hugs, giggly kids, heavenly desserts. . .  It's those Hallmark moments.  They're killing me!

It's hard for me to be angry right now, even at the people who deserve it. When I heard Lindsey Graham was quitting the race, I even found a tiny soft spot just for him.  Aawww.  Nearing the last of the old guard.  He may be a war-monger and a bit of a fibber, but he's not rude, crude, or a low-life.  He may never say anything I can agree with, but when he speaks my tongue doesn't catch fire, my eyes don't bulge, and steam doesn't come out of my ears.  Glad tidings, if not good will.

I can't talk right now about Governor Snyder, Michigan's anti-government legislature, and the lead-poisoning of children in Flint, caused by an emergency manager who decided on his own, with a big thumbs up from the Gov, that saving a few bucks was far more important than the health and safety of an entire city.  It's my own Yuletide promise forcing me to keep the outrage down for the holidays, but it's festering, it's in there and it will come out.

I will leave it to others to comment on Donald Trump calling Hillary's longish bathroom break during Saturday night's debate "disgusting".  You won't hear it from me that it sounds like Donald the Magnificent has perfected the art of peefraining.

I'll leave aside the talk of guns until after the ball has dropped at midnight, the start of a brand new year, unless the unthinkable happens again, in which case, I'm in.  Big time.  But here's hoping.

It's peace I'm after now.  A moment's respite.  A slowing-down, a deep breath, a calm and steady drifting through the sights and sounds of the Holiday season.  A moratorium on palpitations.

But peace is more than a single mindset, more than a quest for calm on a few special days. It's a planetary necessity.  It's how we got here and how we'll stay.

I felt it yesterday as NBC's Hoda Kotb hosted an interfaith panel of women.  She asked three spiritual leaders--Christian, Jew and Muslim--if peace is possible. (Watch it here.)  Peace, they said, is love. 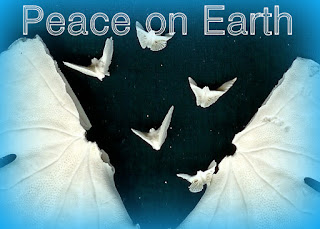 May peace, hope, and love be yours throughout these coming days.  If not, there's always next year.  We'll work on it together.

Posted, too, at Dagblog and Crooks & Liars.

The Murders at Planned Parenthood And The Unbelievable GOP Response


Yesterday on Morning Joe, Joseph McQuaid, the publisher of the New Hampshire Union Leader, was asked why his newspaper was endorsing Chris Christie for president.  Mika Brzezinski asked what successes in Christie's record would stand out as something he could accomplish on a grand scale. Without even blinking, McQuaid rattled off three things.  The first two, apparently in order of importance, were these: Christie is pro-life and has vetoed several pro-abortion bills.  He has defunded a block funding for Planned Parenthood.  (The third one--because there were three--was about Christie keeping taxes in check.) 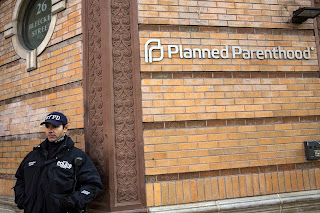 Four days after the latest attack at a Planned Parenthood clinic, where three people died--none of whom were there for abortions--after a gunman opened fire, then surrendered, telling the police "No more baby parts", meaning he actually believed the outrageous lies put forth by Carly Fiorina and other Republican operatives that the clinics were ripping apart babies and selling off parts to the highest bidders, the publisher of a major New Hampshire newspaper saw Chris Christie as the best choice for President of the United States because he has an anti-abortion, anti-Planned Parenthood record.

Granted, I was sitting in my living room, unencumbered by having to worry about how this interview was going and whether lots of people were watching it, but honestly?  Abortion and Planned Parenthood first on the list?  Good lord, people, hackles--or at least eyebrows--should have been raised!  Did the "Morning Joe" panel hear what he said?  Did they remember what happened just last Friday in Colorado Springs?

Innocent people were maimed and murdered by an anti-abortion zealot driven to that kind of madness by relentless, hate-filled, dishonest propaganda perpetrated and generated by Republican leaders.  Yes, Republicans.

And yet, days later, the publisher of a major American newspaper goes on television and endorses a Republican candidate based almost exclusively on his past actions against legalized abortion and against the very organization currently in the news, not over anything they've done wrong, but because somebody went in and shot up one of their clinics.  (I'm repeating myself. I know. Allow me.)

This is how Republicans have to operate now  Their policies are so devoid of the common good their only choice is to resort to lies and fear to ensure they'll keep their jobs.  Nothing new there.  But now, impossible as it seems, they've hit a new low.  They see this latest tragedy at a Planned Parenthood clinic as just the ticket to resurrect their opposition to any taxpayer funding to PP clinics.

This week the Republicans in Congress are working feverishly to fast-track legislation to defund Planned Parenthood.  Honest to God.  I swear on a stack of U.S Constitutions.  I am not making this up (From ThinkProgress):


The unfounded accusations against Planned Parenthood have been linked to the recent tragedy in Colorado.  "No more baby parts," the suspected shooter Robert Dear, who killed three people in the clinic and wounded multiple others, reportedly told authorities.

But lawmakers haven't been deterred from using this inflammatory rhetoric to target the national women's health organization, downplaying the connection between the two.
Sen. John Cornyn (R-TX), the Republican whip, told the Associated Press that the shooting and the investigations into whether Planned Parenthood is illegally profiting from aborted fetal tissue donations are "separate issues completely."

Can you say "Benghazi"?

I would once again like to remind the Republican opportunists already frothing at the mouth over their perceived victory that 1) abortion is not the main function at PP clinics--it's barely a blip--and 2) no federal funds have EVER gone toward abortions--at Planned Parenthood or anywhere else.

And there's the problem.


(Also at Dagblog, The Broad Side, and Crooks & Liars)