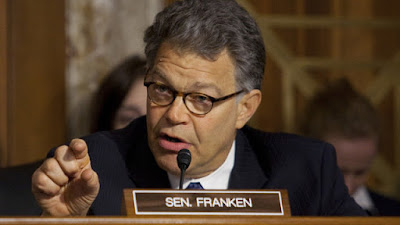 Yes, I'll say it, and I hope it's not too late: Al Franken should not resign. He shouldn't be forced to resign, either by the Democrats who (rightly) can't abide double standards or the Republicans who would love to see a Democratic knock-down. I can agree that what he did to Leann Tweeden was stupid, gross, and thisclose to sexual predation, and still want him to stay where he is.

Leann's story came out yesterday and it's shocking Sickening. I've read Franken's new book, Giant of the Senate, so I know he was no angel during his years as a funny man. He recounts in the book how even he had doubts about his past and how it would play when he ran for a job that followed in the footsteps of his hero, Paul Wellstone. Franken knew his state, knew his politics, had a great education, and was smart as hell--but his chief claim to fame was as a sometimes raunchy comedian. (He should have been a shady billionaire blowhard instead. Pure Teflon.)

The former Fox reporter says he kissed her during a 2006 USO skit but went too far, tongue inserted where it wasn't wanted. (Note to men--and women, too--unless you're in the throes of hot passion, grinding face to face--both of you--don't try to stick your tongue down someone's throat. Coming as it does, unexpected and/or unwelcome, the recipient will gag on what feels like a cold, slimy slab of liver. You must know that by their reactions. Just don't do it.)

And worse, while Tweeden slept, Franken thought it would be cute to pretend he was groping her breasts, and even funnier, have his picture taken while doing it. (She was wearing a flak vest and it's not clear whether or not he actually touched her, but the picture is there and it's insulting, demeaning, and damning. Leann Tweeden has every right to be appalled by its existence.)

So, all that said, how could I, flaming liberal feminist, active #MeToo member, wish for Al Franken to go on working in the Senate? I confess I've been torn over this, asking myself why I should accept Franken's admission and apology and still go after Roy Moore or Donald Trump for their ugly sexual transgressions.

Well, yes, they're lowlife scum and don't deserve my defense--I agree--but I want the punishment to fit the crime. Franken has plenty to apologize for--gross, sexist stupidity is finding its day in court and, after so many decades of unfettered applications, it can't come too soon--and he has apologized. Twice so far, without the usual equivocations. He is as disgusted with himself as we are. Leann Tweeden accepted his apology. She said she doesn't want him to resign, adding that he does good things for the people of Minnesota while still acknowledging it was wrong and these things shouldn't be ignored.

She's right. They shouldn't be ignored. Spreading sunshine all over the place encourages women--and sometimes men--to come out of the shadows and tell their stories. We are at a crossroads now and we have to get it right. Sexual predators, no matter who they are, need to be exposed. We should, of course, look to punishment, but who gets to decide what form and how much?

Did Al Franken do something worthy of expulsion? There's the dilemma. I want women like Leann Tweeden to be able to come forward without consequence to tell their stories. I want the men who abused them to feel their pain, to get it, to show us they've learned from these revelations and will work to put a stop to a culture that has for too long equated power with the freedom to use sex as a right.

I believe Franken gets it. I want him to stay in the Senate because his work is important. Too important to set aside. He does good work there. He asks relevant, sometimes burning questions, does his homework, and works for the disenfranchised, the underdogs, the people hungering for attention to their condition. The loss would be painful.

I want him to work for us, against the Trump administration and the GOP majority, against any hateful agents who try to diminish or harm those of us without power. I want him where he can do the most good. I want him in the Senate.

(Cross-posted at Dagblog and Crooks & Liars)
Posted by Ramona Grigg at 1:09:00 PM No comments: