FRIDAY FOLLIES: On Sheen, Cryer, Franco, Oscar, Boehner, and small triumphs where we find them

***
Okay, this was the week of Charlie Sheen.  He was all over the place (in more ways than one) and actually set a Guinness World Record  by opening a Twitter account and getting a million followers in 25 hours and 17 minutes.  (Thereby giving some credence to his semi-delusional "Rock Star of the Planet" claim.)

But there are a few of us who would rather be talking about his "Two and a Half Men" co-star, Jon Cryer.  William K. Wolfrum (known affectionately as "Wolfie" to a teeny-tiny contingency) set aside his vast storehouse of wild Charlie Sheen events and went digging for the real Jon Cryer, instead.   Yay and yay--and may I say?  Yay.


***
I have a confession to make.  It has to do with my addiction to the Academy Awards, so if you're not interested, or if you think it may drastically change your image of me for the worst, then it's on to the next piece with you--with my blessing.

I have never missed watching the Oscars since their very first telecast on March 19, 1953.  Not one.  I've slept through parts of them, and groaned through many of them, but I have a reputation to uphold now, and I guess this is how it will be until the end of (my) time.  In my small circle it is known as "Mona's Only Claim to Fame", and I hang onto it for dear life.

So this year I sat through it, and only fell asleep for what I'm guessing was about 5 minutes, 31 seconds.  If I could have timed my naps to James Franco's appearances, I would have been almost as happy as I was when "The King's Speech" won best picture.  I like the guy and I hate to add to the pile-ups on whatever the heck he thought he was doing up there, but man, he was dreadful.  (Anne Hathaway clearly saw she was in the middle of a train wreck and was trying not to panic, but there were moments when I thought she was going to tear off one of her many dresses and run screaming out of the theater.)

But for Franco, it wasn't over even when it was over.  He got into a Tweet war with a 20-year-old fellow Yalie (He's working on a Doctorate in English at Yale), and she posted this about him in her blog:  "Combined with his Oscars hosting performance and in accordance with the opinion of commenter's [sic] on my last blog, I'm becoming convinced that James Franco's whole life is a form of postmodern performance art. In that context, his Twitter fits right in."    Oh, ouch.  That's harsh.


***
Here, I'll insert the joke that has gone so viral I think I saw it on a banner streaming off the back of a plane the other day.  It's too long for a bumper sticker, otherwise it would be there, too.  It's everywhere, and now it's here because I love it:

"A public union employee, a tea party activist, and a CEO are sitting at a table in the middle of which sits a plate with a dozen cookies. The CEO takes 11 of the cookies, turns to the tea partier and says, 'Watch out for that union guy. He wants a piece of your cookie.'"

***
But on to the serious political stuff:  John Boehner's House is dumping the Green, cornstarch-based tableware in the House cafeterias and replacing it with the petroleum-based, non-biodegradable plastic of the olden days.   Take THAT you Greenies!  Take THAT, Nancy Pelosi!  Want more salt rubbed in those wounds?  The contract for the Styrofoam cups went to a former Koch Industries executive.  It's just one thing after another, isn't it?


***
But there are lemons and then there is lemonade.  Ever wondered how you could get that grin off of John Boehner's happy/sad/happy/sad/happy face?  As often happens in periods of adversity there comes a shining moment of resourceful brilliance.  This was just one little sparkle, but I'm in awe of the person who started this one:  On the Planned Parenthood donation page there is a link to "Honorary Giving".    There is a button for "I would like to make this gift in honor of"  Then a fill-in the-blank where John Boehner's name could go.  Then an address block where an acknowledgment will be sent to:  John Boehner!

Fill in the blanks with:


***
This was another week where Wisconsin labor kept the lights on.  I can't let this go without bringing in a bright moment from that on-going effort to defend the rights to representation for people in Wisconsin and all across the country.  This is Marge Holicek, a 92 year-old woman who was a proud member of the union and is still out there fighting for their rights: 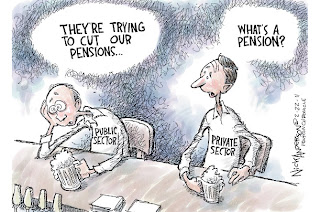