FRIDAY FOLLIES: On Click and Clack, Coulter, The Donald, and the question of Looting

***
Normally I'm not that thrilled with loudmouths from New York but with Anthony Weiner I make the grand exception.  When he gives up his Good Fight gig in Congress, he could take over Late Night and give Leno and Letterman big time runs for their money.  Here he defends the already puny government funding of NPR by talking about my favorite Car Talk guys, Click and Clack:


***
And normally I'm even less thrilled with loudmouths like Ann Coulter, and almost never mention her here, but when Annie tells Billo that scientists say more radiation is good for you in a voice that could kill a cat, it's hard to pass up:

***
I guess you've heard that Donald Trump is thinking about a run for the presidency?  The Donald sees all kinds of problems here in these United States and the quadruple-bankrupted mop-head mogul thinks he's the only one who has the solutions.  He may had set his campaign back a bit the other day, though, when he couldn't quite bring himself to side with the people who believe our president was born in the U.S.  He'll deny he's a birther, but only a birther (or someone who wants badly to run for president as a Tea Party favorite) would still be waffling over the biggest non-issue of our time:

***
I might be the last to discover her, but I found Sally Kohn the other day through a link from a link from a link, I think.  She's a progressive grassroots organizer and frequent contributor to Fox News (uh huh), where she mixes it up with people who actually think they're winning when they go up against her.
Sally Kohn explains our budget using home-made circles and the hair of a darling dog.  Makes sense to me:


***
Jack Cafferty can be as irritating as a burr in my sock, but every now and then he comes up with a quotable or a comment that actually stops me in my tracks.  This is one of them: 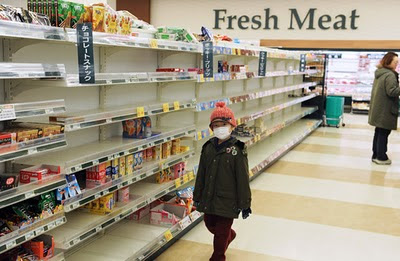 Why is there no looting in Japan?
***
Cartoon of the Week: 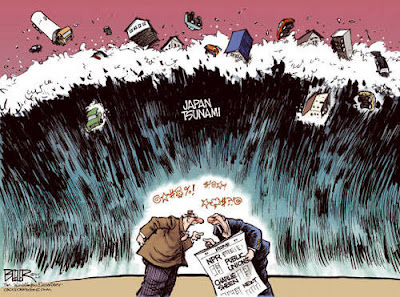