Wherein I'm forced To Admit Only The GOP Can Save Us


So here we are, a month into Donald Trump's wacky version of an American presidency and every day it's something new and nutty. If the actor in this saga weren't actually the president of the United States, this whole thing would be highly entertaining.  A daily heart-pounding serial, picking up where the cliff-hanger from the day before left off--confusing, terrifying, laugh-out-loud--what's going to happen next? 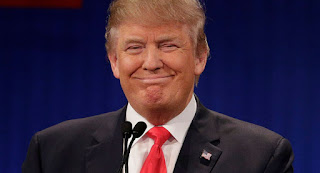 The hapless Democrats, bless their pure hearts--relatively speaking--can only wring their hands and beg the people with the power to look behind a curtain so obviously transparent it's a mystery why we're the only ones able to see through it.

Trump ran on a campaign of shaking things up and now he's delivering in the only way he knows how--by remaining on the campaign trail promising to shake things up.  He loves the crowds that love him back. He pouts, he flounces, he sneers, he snarls, he laughs derisively at anyone who casts doubt. He threatens the people of the world. He cares not a whit about diplomacy or protocol. It's not in him to care. He's here to shake things up.

So last week he tweeted (Note to future historians: when you talk about our first tweeting president, don't hold back), calling certain members of the American press "the enemy of the people".

Well!  Let me tell you! That stirred the dust!  Even more than those times he tweeted about the various intelligence communities' failure to kowtow: 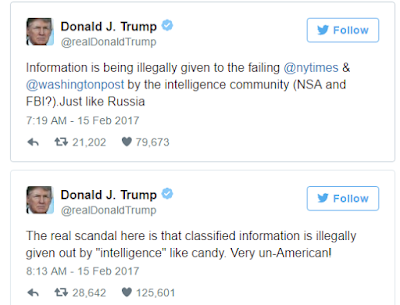 Every day we have to remind ourselves that the tweeter calling himself  @realDonaldTrump isn't a fake, he's actually the guy who won that crazy election and is now the PRESIDENT OF THE UNITED STATES.  The president of the United States is a plain-out ignorant doofus.

So now what? Well, now we admit to our own limitations and look to the Republican leaders to get us out of this. At this point they and only they can do it.  But will they?  We're seeing faint signs of insurrection among the GOP elite, but mostly they're all still of a mind to circle the wagons and pretend (a) this isn't happening, (b) their dignity is intact, and (c) their power is absolutely, wonderfully, absolute.

But, come on, they know better.  Here's the problem: Trump has opened the doors to the candy store and they're the kids rushing inside, grabbing, chewing, swallowing whole before the doors swing shut again.  Too, too delicious.

With the rise of Trump comes such enormous power for the GOP it would take bigger men than they are to look beyond the goodies to see the horrors ahead.  Only Senators John McCain and Lindsey Graham are saying out loud what many of them are thinking: This could go bad.  Real bad.  Don't shut out the messengers. Don't turn off the normal people.  There will come a day when we'll need them.

The rest of us won't sit back and watch this debacle without a fight, but it'll be a long battle unless the GOP gives up some ground, unless they see what the rest of us so clearly see.  Donald Trump may deliver the goods for them but at what price?  When it's all over, where will the country be?  Will those pounds of flesh, the selling of souls, have been worth it?

We know the answers. Now we have to convince the impenetrable Republicans that an unwitting "enemy of the people" sits in the ultimate catbird seat and it's up to them to do something about it.

I'm wishing us good luck with that.  And Godspeed.

Now it Gets Personal 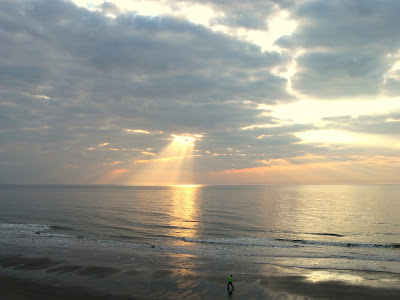 For a couple of months now I've been away from here more than I've been around. There are many reasons for that, but the main reason--the major reason--is because one week ago today I had a radical mastectomy. My right breast is gone, along with a nasty tangle of lymph nodes.

I'll have a bit of a reprieve while I'm healing but chemo is ahead, followed by radiation.  It won't be a walk in the park--I'm not looking forward to baldness and barf buckets--but the one thing I have going for me that too many women in my same situation don't is the reality and the promise of excellent care.  I've had plenty to worry about, but throughout it all--expensive tests, surgery, after-care--cost has never been a factor.

I have Medicare and a moderate-cost, very good supplemental plan. As long as Trump and his cohorts don't foul it up, I should be okay.  But too many people--men, women, and children--are facing frightening medical issues exacerbated by worries based solely on their ability to pay.

We live in a country where most of our wealth has been shuffled to the top 10 percent of our population, where wages and benefits have dropped like rocks and are dropping still, where social and health care programs are at the mercy of reckless, thoughtless, profit-driven politicians.

In every city, in every town, concerned friends and families are forced to set up Go-Fund-Me pages or place money jugs on store countertops in order to pay for desperately needed health care. It kills me to see it, knowing it doesn't have to be this way. It's obscene.

There are bigger fish to fry out there, and I don't plan on using this blog as a personal heath diary.  Ever. I want to be here and everywhere, still fighting against a system that has to be challenged at every turn, and, if necessary, stopped.

The posts may be shorter for a while, using links to pieces I've found that I want to share, possibly adding more guest posts, but I'll be here. This blog has been up and running for eight years, and with that fool Trump out there stomping our country to bits I'm not about to give it up.

One thing I need to stress: You should know me well enough to know this is not a call for sympathy. In fact, I forbid you to feel sorry for me. I'm in good hands, both personally and professionally, and I have great hope that after the long haul I'll be fine.

There is a cancer among us and it's much bigger than the one newly removed from my body. It will keep growing unless we weaken it, stop it in its tracks, and  then find a lasting cure.

We're not quitters and never have been. The GOP is banking on short attention spans to get them through this, but we're paying attention. We've been paying attention. And nothing's gonna stop us now.
Posted by Ramona Grigg at 6:03:00 PM No comments: