Michigan under threat of Dictatorship. NOW can we panic?

The call has gone out and I'm asking everyone who can to take Wednesday [3/16/11] off and head to the State Capitol in Lansing to protest the cruel and downright frightening legislation currently being jammed down our throats.

What is most shocking to many is that the new governor, who ran against the Tea Party and defeated the right wing of his party in the primaries -- and then ran in the general election as "just a nerd from Ann Arbor" who was a moderate, not an ideologue -- has pulled off one of the biggest Jekyll and Hyde ruses I've ever seen in electoral politics.


Rick Snyder pulled a fast one, all right.  He even fooled trusting old Bill Milliken, the only Republican I ever voted for and one of the best governors Michigan ever had.  Gov. Milliken endorsed Snyder, thereby causing thousands of fence-sitters to get up off of their doubts and give the "millionaire nerd" their votes, along with the keys to the kingdom.

I'm a Michigander who voted against Rick Snyder by voting for Virg Bernero (sigh).  Instead of putting us on a path to order and sanity, which is where Virg would've taken us, the election gave us an entire state Republican majority who saw their win as a power-grabbing mandate.

Once safely ensconced in Lansing, Snyder figured out a way to take over the entire state, town by town, school by school, poor schnook by poor schnook.  With the upcoming vote on Wednesday  (pretty much a slam-dunk unless a few Republicans in the legislature decide they're not into state privatization), Michigan will officially become the only state in the union under threat of full dictatorship.

We should have know something smelly was brewing when his first order of business was to "balance the budget" by figuring out a way to squeeze 1.7 billion dollars out of seniors and the poor so that he can give back 1.8 billion dollars in the form of tax breaks to Big Business.

Even Forbes Magazine saw this power grab for what it was. Rick Ungar reported on it in his article, "Union Busting, Michigan Style".

I hope and pray (Did I just say that?) that Michiganders and their BFFS everywhere will listen to Michael Moore and Rachel Maddow and everyone else sending out the call to action tomorrow at noon on the steps of the Capitol Building in Lansing.


These actions are breathtaking when you realize they will drive our already battered state straight into the ground. What we needed right now was an inspiring leader to help us reinvent Michigan and to find creative ways to create new jobs and lift us out of our economic depression. The rest of the country may call what they're experiencing the "Great Recession," but few argue that Michigan is suffering a "one-state Depression."

I know many of you are filled with a great sense of despair and a justifiable loss of hope these days in Michigan. But you must not let things get even worse. You must stand up against these Draconian measures and this outrageous attempt to rip our democratic rights from us by turning our state over to well-paid hacks from Wall Street and corporate America. They see our state as one big fire sale -- and they are licking their chops to get their hands on what is still a state rich in natural resources and industrial infrastructure.

Please show up at noon on Wednesday for our first mega-rally against this insanity. Hundreds of groups are already organizing car pools and buses. You can right now just declare yourself an organizer and get your friends and neighbors committed to being in Lansing. If ever there were a day to call in sick, Wednesday is it (because this IS sick). Students, if ever there were a day to cut class and become a participant in your democracy, Wednesday is it. This event needs to be HUGE -- and I believe it will be if you will simply be there and take a stand.

Much attention has been paid to Wisconsin in recent weeks. Well, they got nothing on what's going on here in Michigan. Rick Snyder is Scott Walker on steroids. There's never been what even the AARP calls "an all-out attack" like this on us. Trust me, you will rue the day you sat home and did nothing while thieves posing as politicians stole your Great Lakes State from you.

Don't let it happen. Be at the capitol by noon on Wednesday for the largest demonstration the state has ever seen.


The AFL-CIO is looking for volunteers.  Go here.

The UAW is providing free transportation in five locations:

Note, too, that this is happening today:

Tuesday, March 15th: Early Bird SpecialJoin the AARP, Michigan League for Human Services and others from 11:00 AM-1:00 PM to say NO to Republican attacks on Michigan's seniors.

I'm a thousand miles away, and it's frustrating that I can't be there today and tomorrow, but I'm there in spirit and I'll keep spreading the word.


If we ever needed solidarity, we need it now.  In every community, in every state.  We can't let this die. 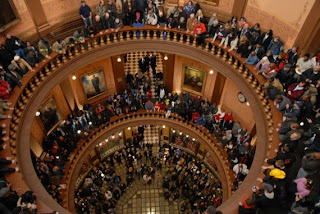