FRIDAY FOLLIES: On Gingrich and Dust Devils and Supply Side Jesus.

***
Possible presidential candidate and every parent's nightmare of a potential son-in-law, Newt Gingrich,  revealed on the CBN (Christian Broadcasting Network) that we're not the only ones who think he's been a bad boy:  "There's no question at times of my life, partially driven by how passionately I felt about this country, that I worked far too hard and things happened in my life that were not appropriate."

Hard work and love of country--it'll do it to you every time.  Thank God for our lazy, unemployed America haters.  That's all we need--to be awash in infidelity on top of everything else we've got going on.

The Guardian reports:  The controversial former bank chief Sir Fred Goodwin is the latest high profile figure to obtain a superinjunction, it has emerged.
The existence of the measure – which bans the press from reporting that an injunction has been obtained – can be revealed after a backbench Liberal Democrat, John Hemming, raised the issue in the Commons.
"In a secret hearing this week Fred Goodwin has obtained a superinjunction preventing him being identified as a banker," said Hemming, the MP for Birmingham Yardley.

***
Warning, sacrilege alert:  By way of Blogging Blue (a great liberal site from Wisconsin) here is Al Franken's "Supply-side Jesus" (from his before-senator days, but worth resurrecting again).   From Al's lips to God's ears--if we're lucky. 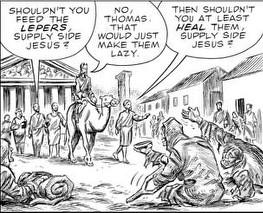 ***
I've mentioned a couple of times that I fight the Right Wing with the kind of passive resistance that most people would say is more than just passive, it's a snoozer, but I've convinced at least one other person that stealth shelf shuffling can be loads of fun.

Here's how it works:
If you find a bookstore that promotes Right Wing books over the more liberal kind (by placing them prominently on tables by the doors or at eye level facing forward on the shelves), you pretend you're checking out Our Good Books and then, instead of putting them back on the bottom shelves or behind the RWNJ books where you found them, you casually place them where they belong:  on top of or instead of the stinkers.  Note that there are cameras on the ceiling, hence the "stealth".  And remember not to buy anything while you're there.

Anyway, I saw this story about a guy who stocks Walmart shelves with obscene photos of himself in drag, and I realized that when it comes to really making waves, I'm pathetic.

FREMONT -- The Toledo man who told police he placed naked photographs of himself inside and outside Fremont's Walmart store will face felony charges.
Fremont police arrested Rodney Kunkel, 44, after store employees called at 7:45 a.m. to report they recognized the man's car in the parking lot while reviewing video footage from earlier in the week. Fremont Detective Sean O'Connell said the store was able to identify the man because the obscene photos found at the store were developed by its photo center.

So in case you're ever looking for a place to develop your obscene photos, Walmart's the place.  But don't go looking for liberal books there.  You won't find them.  They only carry the RWNJs.

***
I found this amazing video on The Political Carnival, another great liberal website.  A slow dust devil creates a gorgeous ballet with plastic sheeting covering strawberry fields in Germany.  It needs music badly.   I chose Aaron Copland's "Simple Gifts" from Appalachian Spring.  You might hear something entirely different. 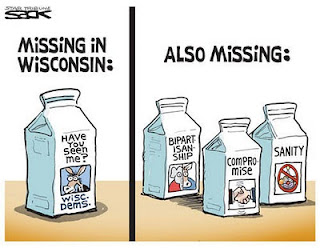