Michigan is under siege. Is Anybody Watching?

Right now, [Michigan] Gov. [Rick] Snyder is pushing a bill that would give himself, Gov. Snyder and his administration, the power to declare any town or school district to be in a financial emergency. If a town was declared by the governor and his administration to be in a financial emergency they would get to put somebody in charge of that town, and they want to give that emergency manager that they just put in charge of the town the power to, “reject, modify, or terminate any contracts that the town may have entered in to, including any collective bargaining agreements.”
Rachel Maddow, 3/9/11


If I had been watching anyone but Rachel Maddow last night I never would have believed what I heard.  Rachel, so far, isn't given to exaggeration or hyperbole.  She does her homework.  Her staff has been working tirelessly to get things right.  But I heard what I heard, and what I heard is that Michigan's governor is on his way to one-upping Wisconsin's Governor big time.  He not only wants to kill the unions, he wants to take over whole villages and towns and give them to his own private Genghises of Nottingham.

Rachel:  “What year was your town founded? Does it say so like on the town border as you drive into your town? Does it say what year your town was founded? What did your town’s founding fathers and founding mothers have to go through to incorporate your town? Republicans in Michigan want to be able to unilaterally abolish your town and disincorporate it. Regardless of what you as resident of that town think about it. You don’t even have the right to express an opinion about it through your locally elected officials who represent you, because the Republicans in Michigan say they reserve the right to dismiss your measly elected officials and to do what they want instead because they know best.”

Rachel also had this to say about the proposed bill--the same bill that no one in Michigan seems to think is such a much: “This emergency person also gets the power under the bill to suspend or dismiss elected officials. Think about that for a second. Doesn’t matter who you voted for in Michigan. Doesn’t matter who you elected. Your elected local government can be dismissed at will. The emergency person sent in by the Rick Snyder administration could recommend that a school district be absorbed into another school district. That emergency person is also granted power specifically to disincorporate or dissolve entire city governments.”

And this:  “The version of this bill that passed the Republican controlled Michigan House said it was fine for this emergency power to declare a fiscal emergency invoking all of these extreme powers, it was fine for that power to be held by a corporation. So swaths of Michigan could at the governor’s disposal be handed over to the discretion of a company. You still want your town to exist? Take it up with this board of directors of this corporation that will be overseeing your future now, or rather don’t take it up with them. Frankly, they’re not interested.”
And then there was this from Rachel, who would not lie:  “The power to overrule and suspend elected government justified by a financial emergency. Oh, and how do you know you’re in a financial emergency, because the governor tells you, you’re in a financial emergency, or a company he hires to do so, does that instead. The Senate version of the bill in Michigan says it has to be humans declaring your fiscal emergency. The House bill says a firm can do that just as well.


This is about a lot of things. This is not about a budget. This is using or fabricating crisis to push for an agenda you’d never be able to sell under normal circumstances, and so you have to convince everyone that these are not normal circumstances. These are desperate circumstances and your desperate measures are there for somehow required. What this is has a name. It is called Shock Doctrine.”

My God. if it becomes as far-reaching as Rachel suggests (and as the Detroit newspapers sort of hint at, though without any real sense of  panic),  this is gigantic news on the battle front.  This is war, Genghis Khan style. (Sorry, Genghis)  Power-hungry hordes are coming to take over our towns and villages, not with cross-bows and sabers but with the mighty pen struck to the mighty bill.  Our home-grown Genghises came for us not by your typical marauding and force, but by convincing more than half of us dumb schleps that the solution to all our problems requires nothing more than a check-mark next to the R on your ballot. 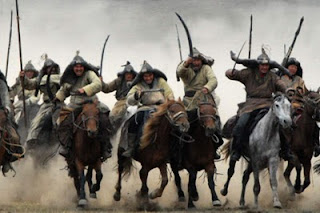 My thanks to Sarah Jones at PoliticusUsa.com for a great post about Snyder and for the transcription of the most pertinent of Maddow's words about the Republican attack on Michigan.

We have to keep this stuff going.  We have to know our enemies and understand their strategies.  They are ruthless and conniving and laser-beamed on their goals to take over the states and then the entire country.  They bear watching every minute of every day.  We can only do that with millions of eyes upon them and with millions of voices shouting to my country 'tis of thee, sweet land of liberty--This is WRONG!