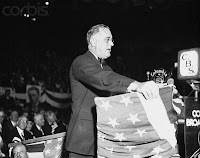 "We had to struggle with the old enemies of peace — business and financial monopoly, speculation, reckless banking, class antagonism, sectionalism, war profiteering. ... Never before in all our history have these forces been so united against one candidate as they stand today. They are unanimous in their hate for me. And I welcome their hatred!"
FDR, Madison Square Garden, October 31, 1936
_____________________

"The bear market would no doubt have magically turned around by now, and those failing geniuses at the helm of our flat-lined megacorporations would no doubt be busy manufacturing new profits and putting people back to work — if only Mr. Obama had solved the banking crisis, had lowered taxes on the rich, had refused to consider running up those giant deficits (a difficult thing to do at the same time that you are saving banks and lowering taxes), and had abandoned any inclination that he might have had to reform health care and make it a little easier for ordinary American kids to get a better education."
Bob Herbert, NYT, March 7, 2009
_______________________

Oh, that Grand Old Party. . .don't you just love them? Is there a former regime anywhere in the world more under-appreciated than they are? Why won't we listen?? Yeah, they've done some things in the past--some things that might have caused a tiny bit of the problems we're facing today--but if we just give them one more chance they promise to change their ways. Because, after all, they are the party of change. . .

Before we turn all those billionaires into mere millionaires, and before we do something as drastic as create jobs for the great unwashed, and before we make the whole damned country healthy, could we please, please just listen to what they have to say??

You know, there was a time when I might have indulged them--a very long, long time ago--but you give an inch with those people and they'll take a mile. I'm listening again to FDR's famous Madison Square Gardens speech, given in October 1936, and it sickens me that it's the same speech Barack Obama should be giving today.

How have we come to this again? Where was everybody? Oh, there were voices raised against the current Right Wing machine--many millions of them--but again, for way too long, we were treated as quaint, foolish Chicken Littles: "The sky is falling! The sky is falling!"

So now that the sky has fallen, can we please get back to reality? Can we not give another moment's breath to the GOP's pompous hate mongers, their selfish twits, their holier-than-thous? If President Obama ever wants to get us on the right track again, he has to turn against them in order to be for us. That's his job. Hold him to it. 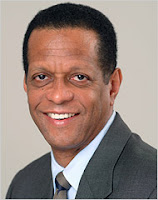 As Bob Herbert said today, in yet another smack dab, right on column, "I don’t know whether President Obama’s ultimate rescue plan for the financial industry will work. He is a thoughtful man running a thoughtful administration and the plan, a staggeringly complex and difficult work in progress, hasn’t been revealed yet.

What I know is that the renegade clowns who ruined this economy, the Republican right in alliance with big business and a fair number of feckless Democrats — all working in opposition to the interests of working families — have no credible basis for waging war against serious efforts to get us out of their mess."