Our Money? Since when? 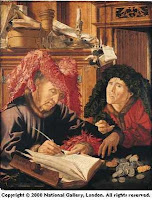 y believe that the money we shell out in taxes is anything other than an absolute giveaway? Do I have control over it once it leaves my hands? No, I don't. Do you? The truth is, as much as we want to feel good when The Powers say, "This is your money. . ." or "We owe it to the taxpayers. . . ", it's nothing more than a soothing murmur, a perfunctory pat on the head, as they pocket it all and head for their far-off moated castles.

Make no mistake. We are not "partners" in this great country of ours. We're the serfs, the peasants, the "folk", and our sole function is to fill the coffers, to provide services and succor to the gentry--and to do it with no questions asked and great gushes of gratitude.

In the mid- to-latter part of the last century we, the people, had it pretty good. We made things--remember? A good portion of the working class brought home paychecks large enough to actually buy things without mortgaging their entire lives. Mothers could even be home with their children.

But then a plague called "Reaganomics" descended upon the land, and over the years the Robber Barons were given the gift that keeps on giving: Deregulation. Talk about glee! The Free markets shall reign! Long live the Free Marketeers!

But peasants, never fear--Reaganomics will be good for us. They've come up with something called "trickle down". Yes, the rich will get richer. Of course! But they're going to share. No really--they're Americans. They wouldn't sell us down the river. Or across the sea.

Remember that? Has the trickle gotten to you yet? Nope, me neither. I see gushers of gold going to the already monied, but nary a drop coming this way. Not even a shiny damp spot. None to be seen.

I'm going to skip over the dreaded Bush Years here. You already know what happened. Talk about your horrible nightmares come true. Longest eight years of my life. But we're on the other side now, and while I doubt we'll ever look back on any of it and laugh, even after all we've been through we were still able to muster enough energy to boot the thugs out and bring in a shiny-armored knight. That was good.

But the trouble with knights? When they remove all that glitter, underneath they're just--you or me. All the power, apparently, is in the heavy metal.

So today, when we peasants were hearing about $165,000,000 worth of bonuses paid or promised to executives who dragged their company, AIG, to the edge of the cliff, where we peasants, AKA taxpayers, threw out a safety net and rescued just this bunch alone to the tune of 170 billion dollars (We must have done it in our sleep because when we finally woke up whole storehouses full of money had disappeared), a cry went over the land that the shiny-armored knight is beginning to tarnish. 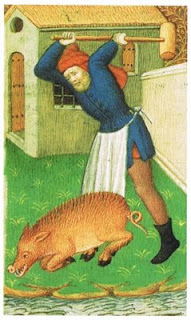 The re-birth of this nation is still in its infancy. The knights are just leaving the Round Table, getting ready to do battle. There are marauders all along the way, and let's face it--they're good at doing dastardly. They've had a lot of practice.

So get out the damned Tarn-X or whatever it takes. Shine up that suit. Wipe the mist from the man's eyes so he can see more clearly now. He's got promises to keep and daunting tasks ahead. And the peasants, in case you haven't noticed, are on the move.

(Any pigs at the trough? Your days are numbered. We mean it this time, so enjoy it while you can.)