This is not a Battle, it's a Snit 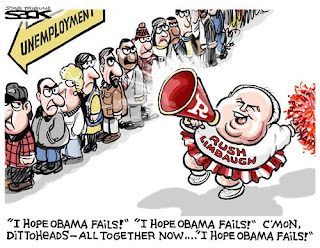 Yesterday you sent me an email asking me to "join [you] in telling Senate Republicans to go on record and declare their independence from Rush Limbaugh." You asked me to "click here to join the DSCC in demanding that Senate Republicans reject the disgraceful words of Rush Limbaugh and declare their independence from the divisive politics of the past." You even asked me for money to help your cause.

Now, J.B, I don't know you but I'm going to assume you're an okay person. And, considering that our entire country is facing near-devastation at the moment, I'm also reasonably sure you think you have our best interests at heart.

But (come closer now because I only want to say this once), ARE YOU NUTS??

With all that we've had to endure, with all the work that has to be done, this is the cause your committee has chosen as the ultimate threat to our country? Bringing Republican toadies to their knees for saying "All Hail" to Rush Limbaugh?

You say, "For years, Republicans have been taking their marching orders from Limbaugh. In 1994, they named him an honorary member of Congress. Leading national Republicans have called him, "a great leader," "a great American," and "the number one voice for conservatism in our country."

You say, "Lately, Limbaugh has grown so powerful that two leading Republicans have had to ask for Rush's forgiveness after they dared to criticize him."

I say, "Did you ever see such a sorry spectacle?"

You say, "Rush Limbaugh is free to say whatever he wants."

Then you say, in big bold letters, "But when people like Limbaugh start dictating the behavior of Senate Republicans and begin jeopardizing the future of America; it is time for an intervention."

The behavior of Senate Republicans would be the same with or without Rush. They've always been obstructionist blowhards. Last I looked, Limbaugh never ran for office and has never won an election. He's a radio talk show host and nothing more. Though he styles himself after Joe McCarthy, he'll never get there. He doesn't have that kind of power. He can't write legislation, he can't hold committee hearings, he can't collude with the Army or the FBI, and he can't ruin people's lives.

You say, "Click here to sign the DCSS's petition--which will be sent to Republican leaders--demanding that they reject the disgraceful words of Rush Limbaugh and start working with President Obama on real solutions for the American people."

And I say, "No way." I don't say this because I'm a fan of Rush's. If you knew me at all, you would know I find him just as loathsome as the majority of the country. But here's why I won't sign your petition and I won't send you money:

In your own words: "America can't afford this childish posturing anymore. We are in crisis -- and President Obama needs everyone in Washington -- including Republicans -- to work on constructive solutions to get America moving again."

Exactly. Didn't you read your own words? You're feeding a beast whose middle name is Gluttony. Get off of this moronic bandwagon and use your considerable resources for the real battles ahead.

Now go sit in the corner and think about what you've done. I'll get back to you later.