A contract is a contract--WHEN??

The real scandal of AIG isn't just that American taxpayers have so far committed $170 billion to the giant insurer because it is thought to be too big to fail -- the most money ever funneled to a single company by a government since the dawn of capitalism -- nor even that AIG's notoriously failing executives, at the very unit responsible for the catastrophic credit-default swaps at the very center of the debacle, are planning to give themselves over $100 million in bonuses. The scandal is that even at this late date, even in a new administration dedicated to doing it all differently, Americans still have so little say over what is happening with our money.
Robert Reich here. 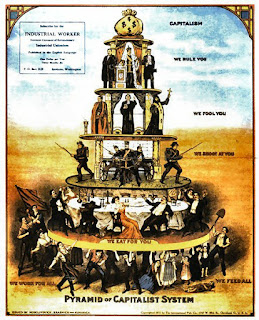 I'm going to make this short because I want to go off and think about that number, $170 BILLION.  I might have to get out my handy calculator again, but from right here, right now that looks like a whole hell of a lot of money.

I guess we're supposed to feel good about the $100 million worth of bonuses going to those needy, worthy AIG execs, since it's nowhere near $170 BILLION.

I guess we should all feel good about honoring contracts. After all, these same people have always been so good about honoring contracts with their workers. Doesn't Big Business enter into contracts with ALL workers? Don't they promise, at the hiring of those workers, that if they do their jobs they'll be entitled to job security, pay raises, reasonable benefits--and best of all, down the road, a bankable, safe retirement fund that'll take them happily and healthily into their Golden Years?

What? They don't? They haven't? I'm shocked.  I thought all those other figures--more than 600,000 workers losing jobs EVERY MONTH--were just more socialist propaganda.

Those unemployment lines? Pshaw! They're people who really don't want to work and would rather collect checks from the government. (See Erin Burnett's "maybe, possibly, some people say, let's look at China" here.)

Seven hundred out-of-work Americans standing in line for a handful of jobs? Grand-standers, actors even,  probably hired by the Democrats to make a pathetic point.

A Bailout LOAN for GM? Ridiculous! The unions must die. . .

But let's, in the name of all that's holy, save those CEO bonuses. We will not survive as a civilization without them. We can't let AIG fail!!

But wait. . .that was yesterday. This is today. Is there anybody today, besides Erin Burnett, who believes that taxpayers should be paying huge multi-million dollar bonuses to AIG execs? Erin, dearheart, was just on Morning Joe claiming that if AIG doesn't honor those contracts, they'll end up paying twice that amount to some upstanding businessmen in London who are obviously entitled. To which Mort Zuckerman, sitting on the set, said, Outrageous! It's a rogue operation in London. AIG should never have had dealings with them. (How come Erin didn't know that?)

So can we all agree now that if we're going to own 80% of AIG we should have a say in who gets what? Thank you. Now can we, the taxpayers, light a fire under our leaders and get them to do what they promised to do when we gave them all of the power?

I think we can. The calculator can wait. Those number are too big for my little mind, anyway. I'm going after my congressmen instead. I've got their numbers and I know how to use them.