Harsh Realities in a Country gone Mad with Greed

This is one of those stories that will seem so unbelievable, so beyond the pale, so, well, un-American, you might be tempted to either disregard it completely or cast it in a fictional light in order to escape the obvious conclusion: There are horrors perpetrated on human beings in this country that rival those in the worst of the worst of any third-world country.

Everything that happens in this story happens because the ones with the power could not, would not, control their greed. Everything that happened to these people happened because there was nobody looking out for them. The perpetrators knew they were living in an era where laborers were a dime a dozen. If one died off, there were plenty more where they came from. And the best part of their scheme was that, because most of these people were here illegally, nobody would be the wiser. Nobody would care. Least of all, the government.

This is the story of the cruel exploitation of produce pickers, but it didn't happen in the 1930s of Steinbeck's "The Grapes of Wrath" or in the "Harvest of Shame" 1950s-60s, before Cesar Chavez began to organize migrant farm workers. It happened--and is happening--right here, right now, under our watch, in the 21st Century.

In an article published yesterday, Barry Estabrook writes this:
Immokalee is the tomato capital of the United States. Between December and May, as much as 90 percent of the fresh domestic tomatoes we eat come from south Florida, and Immokalee is home to one of the area’s largest communities of farmworkers. According to Douglas Molloy, the chief assistant U.S. attorney based in Fort Myers, Immokalee has another claim to fame: It is “ground zero for modern slavery.”

Working at breakneck speed, you might be able to pick a ton of tomatoes on a good day, netting about $50 at 45 cents per 32-pound basket. But a lot can go wrong.
The beige stucco house at 209 South Seventh Street is remarkable only because it is in better repair than most Immokalee dwellings. For two and a half years, beginning in April 2005, Mariano Lucas Domingo, along with several other men, was held as a slave at that address. At first, the deal must have seemed reasonable. Lucas, a Guatemalan in his thirties, had slipped across the border to make money to send home for the care of an ailing parent. He expected to earn about $200 a week in the fields. Cesar Navarrete, then a 23-year-old illegal immigrant from Mexico, agreed to provide room and board at his family’s home on South Seventh Street and extend credit to cover the periods when there were no tomatoes to pick.

Lucas’s “room” turned out to be the back of a box truck in the junk-strewn yard, shared with two or three other workers. It lacked running water and a toilet, so occupants urinated and defecated in a corner. For that, Navarrete docked Lucas’s pay by $20 a week. According to court papers, he also charged Lucas for two meager meals a day: eggs, beans, rice, tortillas, and, occasionally, some sort of meat. Cold showers from a garden hose in the backyard were $5 each. Everything had a price. Lucas was soon $300 in debt. After a month of ten-hour workdays, he figured he should have paid that debt off.

But when Lucas—slightly built and standing less than five and a half feet tall—inquired about the balance, Navarrete threatened to beat him should he ever try to leave. Instead of providing an accounting, Navarrete took Lucas’s paychecks, cashed them, and randomly doled out pocket money, $20 some weeks, other weeks $50. Over the years, Navarrete and members of his extended family deprived Lucas of $55,000.

Taking a day off was not an option. If Lucas became ill or was too exhausted to work, he was kicked in the head, beaten, and locked in the back of the truck. Other members of Navarrete’s dozen-man crew were slashed with knives, tied to posts, and shackled in chains. On November 18, 2007, Lucas was again locked inside the truck. As dawn broke, he noticed a faint light shining through a hole in the roof. Jumping up, he secured a hand hold and punched himself through. He was free.


This is not somebody's hysterical hyperbole designed to bring out the Socialist in us. This is journalism at its best, drawn from information obtained through government, union, and other reliable sources. This particular article--this superb piece of investigative journalism--came from. . .are you ready. . .?

This has been an on-going public story for a few years now, but despite the best efforts of Douglas Molloy, the CIW (click to read about six other cases of slavery in Florida since 1997), The Campaign for Fair Food, and the Collier County Sheriff's Office, who in the mainstream media has picked up on it and kept it going? Has Fox News reported on it? "Morning Joe"? Charles Gibson? Katie Couric?

I found the story at Common Dreams first, but it's been out there in one form or another for a long time. This is how networking works best. We find these things that the MSM deems Not Worthy of Big Splash and we spread it around until it gains momentum. It's been Blogged and Digged and Facebooked and Tweeted and soon enough the story will be big enough and out there enough so that those Mainstreamers will look foolish if they continue to ignore it.

No, it'll never be big enough to supplant the really big stories--like who's the latest of the Limbaugh kowtowers to have to apologize to their Rightful Wing Leader. (Ed. note: Oh, the mighty--how they have fallen.)

Mark Rodrigues and Rebecca Smith wrote about it more than a month ago in The Huffington Post. They wrote:

In December 2008, federal prosecutors from the Department of Justice wrapped up yet another farm labor slavery case in Florida, a case the Chief Assistant US Attorney called one of Southwest Florida's biggest and ugliest slavery cases ever, according to the Ft. Myers News-Press. When the defendants were indicted a year ago, US Attorney Doug Molloy called the case "slavery, plain and simple."
This latest case in which, according to court documents, workers were chained to poles, locked inside trucks, beaten, and robbed of their pay, was the seventh such case in just over a decade. Indeed, so shameful is Florida's record of farm labor abuse that a federal prosecutor involved in one of the slavery prosecutions told the New Yorker magazine, "What you get with agriculture is a pattern of exploitation that can be understood only as a system of human-rights abuses."
Charlie Crist, Florida's Governor, knows about it. He recieved a petition with thousands of names on it last month, so any day now we should be hearing cries of outrage from the Governor's Mansion over these abuses.

On February 28, 2005, Evelyn Nieves wrote a piece about the organizing of the Immokalee migrant workers called "Florida Tomato Pickers still reap 'Harvest of Shame'." At the very end of the piece, she wrote this:
That was four years ago. Four years ago. And today I'm reading about the Immokalee slaves as if it were a brand new story. There has been a breakdown in investigative reporting in this country that is beyond frightening. Were we living in a police state the past eight years? How could this happen?

I'm going to do my best to keep this story going. I hope you will, too. Please use the links above to read the entire story, and then pass it on wherever you can. Let's be Tom Joads. Let's be there: 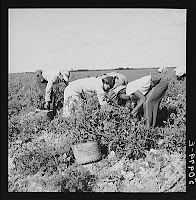 Tom: I'll be all around in the dark - I'll be everywhere. Wherever you can look - wherever there's a fight, so hungry people can eat, I'll be there. Wherever there's a cop beatin' up a guy, I'll be there. I'll be in the way guys yell when they're mad. I'll be in the way kids laugh when they're hungry and they know supper's ready, and when the people are eatin' the stuff they raise and livin' in the houses they build - I'll be there, too.

This is one horrific example of what unchecked greed does. The victims are human beings, and this is America. This is not how we Americans are supposed to be.