Shades of Dr. Phil! Pop Psych at HuffPo, and AIG is the patient

Today is Sunday and I started my day by reading Frank Rich, Maureen Dowd, and Tom Friedman. They all talked about AIG and the current money crisis, and I have to say--the wheelings and dealings and sheer dollar amounts are so beyond me I don't even pretend to understand. I just take their superbly-written words for it. Those jackals screwed us, we let them, and now we're in so much trouble we may all have to go back to living in caves and foraging for food. It's scary, I tell you. . .

Then I moved over to the Huffington Post to see what they had to say about it all. (I started reading the HuffPo on its very first day online (before it became HuffPo), and I can almost always find something worthwhile to read there. I admit I cringed a little when they added an Entertainment section, and I absolutely hated their screaming Tabloid headlines last week when they reported hour-by-hour the latest on Natasha Richardson's skiing accident and subsequent death. Disgusting ("She is brain-dead!") and more than gagworthy.) 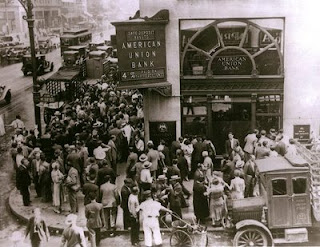 After reading that triad of truth-seekers , I was ready for bear. But I saw a headline for an article called, "How Corporate America can Earn Forgiveness and Rebuild Trust", and decided to take a little humor break before I went hunting again. Arianna often has comedians or humorists giving their takes on politics, and after that whole Jon Stewart thing in the last couple of weeks, I could hardly wait.

But here's the weird part. I think the guy who wrote this was serious!

I don't know the author, Mark Goulston, and again, I'm no expert, but after reading those NYT columnists I'm having a hard time making a connection between what those AIG crooks have done so far and the notion that they're now humbled enough to work on earning forgiveness and rebuilding trust.

But the good doctor (He's an MD) seems to think that if they will just follow his "Four Hs" and his "Four Rs" (We'll get to that) all will be well in Dizzyland and there will be no more need for tent cities or snaking unemployment lines. (He doesn't actually say that, but it's implied.)

He starts off like this: To err is human; To admit and accept complete responsibility for it, divine.

Really. That was "erring"?

"There is a way to repair the damage wrought by corporate transgressions. Be forewarned. This solution is not for the faint of heart or the uncommitted.
THE FOUR H'S: THE FALLOUT OF IMPROPRIETY & DECEIT
When a company, CEO or Board of Directors commits an unethical, if not immoral act, it triggers Four H's in investors, shareholders, employees, and the public at large:

Uh huh. But wait--the Good Doc has thought this all out and there's a solution. The Four Rs:


THE FOUR R'S: DAMAGE CONTROL AND HEALING THE PAIN

The corrective responses to the Four H's are the Four R's: Remorse, Restitution, Rehabilitation and Request for Forgiveness. If you are the CEO or part of the team responsible for guiding your company or industry through such a crisis, these are the steps you will need to take, (You is used to describe an individual, management team or company).

Remember now, he's writing this for all those execs who've conned, are conning and will continue to con. But there's apparently hope for them--which means there's hope for us. Here's what the Doctor ordered:

"Delivering the 3 R's of Remorse, Restitution and Rehabilitation may not prevent the injured from holding on to their resentment. If that's the case, you will need to exercise the 4th R -to Request Forgiveness. Make this request only after you have demonstrated a track record of remorse, restitution and rehabilitation for at least six months (and perhaps even as long as the length of the transgression). Forgiveness, like trust is something that must be earned. One hopeful point to keep in mind: If you demonstrate a solid track record of Remorse, Restitution and Rehabilitation, and then Request Forgiveness and are not forgiven, it is not you that is unforgivable. Your investors, shareholders and employees are unforgiving. You cannot control other's feelings. You can only be true to and control yourself."

And NOW he tells them to control themselves. Where was he when all this was going on? Probably delivering homilies to Oscar the Grouch in hopes of turning a frown upside down.

This is pop psychology at the kindergarten level--the very reason we came up with "psychobabble" . Here is Dr. Goulston's last word to those naughty execs:

"Your ability to handle this crisis may be the lifesaver they've been reaching for, and the lift needed that will finally allow them to believe in you and more importantly to begin to believe in corporate America again."

Have you ever believed in Corporate America?  No, neither have I. So here's my last word: You want an "R"? I'll give you an "R". How about "Revenge"?

(The REST of this story: I tried to leave a comment at the bottom of Gouldston's article and it was rejected! I mentioned some of the same things I wrote about here, but I did it in a polite way. Really. I might have said "You've got to be kidding!" and maybe I mentioned "kindergarten stuff" and I think I might have sounded like I was scoffing a little, but is that reason enough to just delete me? I don't know what's going on over there at HuffPo. Who's running that show, anyway?  But I got a blog post out of it, which wouldn't have happened if I hadn't been--I'll just say it--rejected.)