Sliding Toward a More Social Union 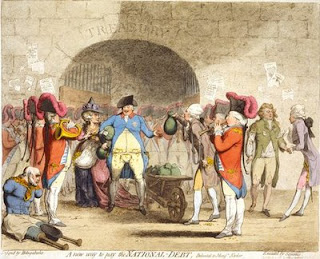 Throughout the entire reign of the devastating Bush years, and even during the pro-business Clinton years, (when we all watched Bill Clinton cozy up to the Republicans in a misguided and futile attempt to make them stop their incessant bullying), I felt like the lone voice whimpering that you just can't let raging Capitalism take hold without allowing social consciousness to follow in its wake, caring for the inevitable battered and bloodied.

Michael Winship wrote a piece in Bill Moyers' Journal's The Blog yesterday called, "Oh, what a lovely class war!". He starts it this way:

"My goodness, how they howl when the proverbial shoe is on the proverbial other foot. You’d think the Red Army had just left Moscow and was preparing a frontal assault on the Federal Reserve.
So what are conservatives, Wall Street and financial television commentators shouting? Socialists! That's right. Spread the word: Socialists are swarming over our nation's capitol, and making off with the means of production, otherwise known as campaign contributions and the Federal budget. You got trouble, my friends."

North Carolina senator Jim DeMint doesn't want a thing to do with nationalizing banks, and he uses the threat of "socialism" to make his argument: "I think the idea of nationalization is the same idea as socialization," DeMint said. "I think we need to do everything we can to make the private markets work and not use this as an excuse to expand government into owning banks and other companies."A little late for that, Jim. The private markets blew it. That's why we're where we are now. If even the slightest hint of regulation had been in the mix, we might not now be looking at having to own the banks in order to make them do right by us. (Or we might not be watching Bernie Madoff this very day do the perp walk to face the thousands he swindled out of billions without fear of detection.)

What we're hearing now is the bleating sounds of sheep dying a hard death. Pay no attention. We don't have time for them.