Every year I think about entering a sentence in the Bulwer-Lytton Fiction Contest, but it always happens after I've seen the announcement of that year's winner.   This particular contest is like a "Worst Fiction in the World" contest, where contestants have to come up with an opening sentence for an imaginary novel that is worse than, or at least comparable to, Edward George Bulwer-Lytton's first sentence of his 1830 novel, Paul Clifford (and the first line of many of Snoopy's unfinished novels). 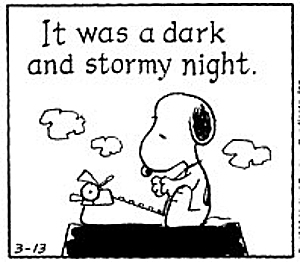 (Here's the entire sentence. You be the judge):


"It was a dark and stormy night; the rain fell in torrents--except at occasional intervals, when it was checked by a violent gust of wind which swept up the streets (for it is in London that our scene lies), rattling along the housetops, and fiercely agitating the scanty flame of the lamps that struggled against the darkness."

I love the idea of coming up with a sentence so godawful bad it could actually win an award. I think I could do that.  Write badly, I mean. A sentence that would drop them to their knees, where, when the dust settled, they would find an entirely new perspective; or better yet, fly them to the moon, where green cheese is a mere but pleasant myth, but the ethereal man who smiles down on Mother Earth is as real as their hearts will allow, thus opening a path to thinking kind thoughts of me.

Anyway.  The 2011 over-all winner was a professor from Oshkosh, WI, who sent in this sentence:

"Cheryl's mind turned like the vanes of a wind-powered turbine, chopping her sparrow-like thoughts into bloody pieces that fell onto a growing pile of forgotten memories."

I personally thought this one, from the "Purple Prose" category, should have won, but click on the link above and see what you think:

"As his small boat scudded before a brisk breeze under a sapphire sky dappled with cerulean clouds with indigo bases, through cobalt seas that deepened to navy nearer the boat and faded to azure at the horizon, Ian was at a loss as to why he felt blue."

More odd news from Wisconsin:  A highway worker found a dead animal by the side of the road that was like no other he had ever seen.  "It's completely hairless [he said], almost like leather.  It has a canine-like head and a fox- or dog-type head. The rear legs are coon-like. The tail is almost like an opossum." 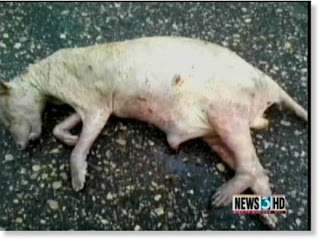 Some people think it's a chupacabra, while others think it's just an animal with a severe case of mange. But it turns out there have been sightings of similar animals all over the place.  And unlike Bigfoot, there's actually a carcass. (Either the genus Bigfoot never dies or they disintegrate and turn into dust, giving them an entirely new perspective, leaving nothing to us except our own imaginings.)

And speaking of oddities, how about Arizona and those dust storms?  Where the heck did they come from?  And why are they all of a sudden called "haboobs"?  Such a ruckus in that touchy state over an Arabic word for "Holy shit!  Look at that thing!"  Articleman wrote about it on dagblog last week.  (He lives in Arizona but he's okay.  He's not one of them.  Lordy, if  the dust ever settles in that nutty state, everyone could breathe easy again.)

A Flash mob comes to a DC Walmart:  I love flash mob videos, but this is a new one on me.  All they want is a little R-E-S-P-E-C-T.  Just as much fun for the rest of us but it doesn't look like the Walmart manager is enjoying himself.  Still, he let it happen.  Good for him.    (Thanks to GottaLaff at Political Carnival for this.)

A moment sublime:  There was a forest fire to the west of us last week.  Not close enough to cause any concern for us, but it produced a spectacular sunset.  It went on and on.  I ran out of purple prose long before it finally subsided. 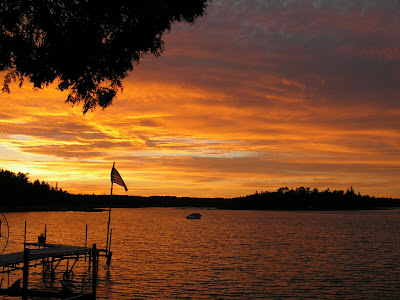