FRIDAY FOLLIES: On the Palin Docudramody, the Cantor uninvite, and Will Rogers' finest moments

All alone, I'm so all alone...  When the Sarah Palin docudromedy "The Undefeated" debuted last week, Conor Friedersdorf happened to be visiting his parents in All Red All the Time Orange County.  He went to see the Sarah movie hoping to interview Sarah fans to find out what the hell they're thinking.  Except he didn't find any.  In fact, he didn't find anyone at all--hardly.  He wrote about it in the Atlantic and -- I don't know -- I just wanted to cry.  I mean, an entire movie about Sarah Palin and even the Orange County gushers can't bear to watch it?  That's just sad.

But wait.  That can't be right. It's La Belle Palin we're talking about here.  So, okay!  The Washington Times says the lamestream press got it allllll wrong.  As usual.  On purpose.  It may not have been boffo, but it did pretty good compared to that movie about Eliot Spitzer or that movie about Jack Abramoff.  But the last Harry Potter movie debuted on the same weekend.  Harry Potter!  So what would you expect?  Jeez.

And here's the other thing (sniffle):  If hundreds of thousands of people had only read Ben Howe's pre-review on Andrew Breitbart's Big Hollywood, Harry Potter would be eating dust!  The movie is brilliant!  Dammit!

Eric Cantor, in true democratic spirit (how'd he let that get by?), invited everyone (not just his nearest, dearest, most oblivious fans) to his Facebook page for a confab on whether he and his buddies should destroy the country swiftly or take the chance that the voters might not notice the country's going down the tubes and and let it dangle in the wind a while before tightening the noose.


Well, those damned liberals got wind of it and got a flash mob going, trying to disrupt the whole exciting exercise.  Honestly, there's only so much tolerance for that sort of thing when you're a Republican, so Eric's peeps got busy deleting all the leftist comments, ruing the day they ever got the silly idea of opening it up to anyone, just anyone, in the first place.

So if you look today you'll see it's still open, but they've figured out that allowing one or two Commie comments (out of thousands submitted, I'm guessing, if our guys are doing their jobs) will draw 10 or 20 delightfully defensive comments from their nearest and dearest.  Works like a charm!  Woo hoo!  (I would try out the commenting but I would have to "like" Eric Cantor and I'm not ready to go there yet.)

"Will Rogers and American Politics" was on our local PBS station last night. (Another fine program from the folks having to spend way too much time fighting the privateers in order to bring us public television.) Will started out as a soft-spoken, lasso-twirling Vaudeville comedian and became America's foremost political humorist.  (He was the Jon Stewart of the 1930s, come to think of it.) There was plenty to make fun of when it came to politicians and politics, but he was a gentle man, a compassionate man, and the Great Depression tore at him until he could no longer take what was happening in his beloved country.  He took to the airwaves and talked about it seriously.  Listening to the audio of his speech about unemployment, I'm hearing a man who is almost done in by the enormity of the suffering caused by that era's masters of greed and avarice.  (The radio broadcast was filmed and is shown on the PBS documentary.  It's almost unbearable to watch, Will's pain is so palpable.)

I didn't hear that same hopelessness when he spoke before a group of bankers (who must have decided to invite him after a late night of illegal hard stuff), calling them "loan sharks" and "interest hounds".

You are without a doubt the most disgustingly rich audience I ever talked to, with the possible exception of the Bootleggers Local Union #1 along with the enforcement officers.

Now I understand you hold this convention every year to announce what the annual gyp will be.  I often wondered where the depositors hold their conventions.

I see where your convention was opened by prayer.  You send outside the ranks to find somebody that knows how to pray.  You should have had one creditor there to show you how to pray.

I see by your speeches that you're very optimistic of the business conditions of the coming year,  Boy, I don't blame you.  If I had your money I'd be optimistic, too.

You have a wonderful organization.  I understand you have 10,000 here and with what you have in various federal prisons brings your membership up to around 30,000.


Well, goodbye, paupers.  You're the finest bunch of shylocks that ever foreclosed upon a widder's home.


Moment of Sublime:  A freed humpback whale thanks the crew who saved her.  This is a feel-good story that may or may not be what it seems.  The crew of a fishing boat found the whale so entangled in fishing line it was probably hours away from sure death.  It took them about an hour to free the whale, and when they finally did, it swam a short distance and then put on an enthralling performance, convincing the crew that it was for their benefit.

Far be it for me to be cynical (and I can't believe this is me writing this) but it could be that that was as far as the whale could swim right then, and the glorious leaps could have meant it was gasping for air, trying to get its lungs and other internal parts working again.  But the visuals are stunning and I hate myself for thinking such doltish thoughts. 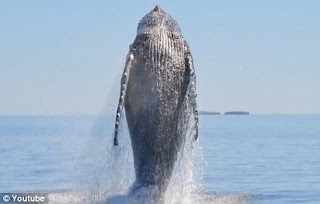