I guess you've heard that the Orlando police have been busy arresting people from Orlando Food, not Bombs who have been busy feeding the hungry and the homeless in the city's public parks.  That was a big story in itself, but the even bigger story was that, among the protesters, there was one lone supporter of the police.  He prefers to remain anonymous, but he's pretty clear about why he's supporting them (watch the video from Rawstory):


“The Orlando Police Department has demonstrated that you can count on them to enforce the law,” the protester explained stoutly. “If it was against the law for women to vote, I think they would would be there to arrest women who tried to vote. And if it was still against the law for African-Americans to use the same restroom facilities as Caucasian-Americans, Orlando Police Department would be right there to arrest them. Because they will enforce the law no matter what it is, so we have to support them for that.
“Because in America,” he went on, “the last thing you need is liberty, justice, conscience getting in the way of the law. We don’t want that. So we need to have officers who will just blindly obey and follow anything that they’re told. Because this country was founded on bootlicking. … I’m a tax-paying American. I want to see my tax dollars put to use. I like to see people getting arrested. … So I think they’re doing a great job, and as long as they continue to arrest people for feeding the homeless, I’ll continue to support them, because they’re doing their job. ... I think anybody should be arrested for feeding the homeless because it's a vicious, vicious problem."


So here's "the rest of the story".  On Monday, while police were waiting in Eola Park to arrest more feeders of the hungry, Food not Bombs were in front of City Hall setting up their tables and serving up the food.  They were invited by the mayor, Buddy Dyer, who even offered to give them peppers from his roof garden.  It was an open invitation to set up "any time they wanted".  From the mayor.

Which brings me to my next question:  Who do the police answer to, if not the mayor?  Can't he just tell the police to go find some real crime to stop?  And if he's not in charge there, how does he have the authority to let them set up in front of City Hall?  Is he in danger of getting arrested, too?  So many questions, but the point is, the guy with the sign supporting the police got OFNB much more attention than their own protests did.  Fine job, guy, whoever you are.

I think what I read was that Buddy, the Orlando mayor, has a vegetable garden on the roof of city hall.  They can't feed the homeless in public parks but they can grow veggies on the roofs of public buildings.  That's different.   Go tell that to the people in power in Oak Park, Michigan, where there's a battle going on because Julie and Jason Bass dared to tear up their front yard and put in a vegetable garden.  A nice vegetable garden.  Well kept.  No weeds.  But nonetheless they're vegetables and according to the interpretation of their poorly-written ordinance, they're not allowed in front yards. 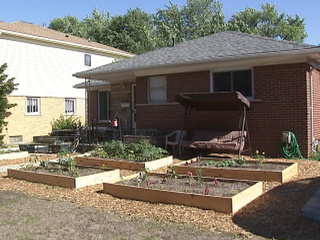 Julie Bass says she called city hall and didn't get a "no", so they went ahead and planted their veggies.  Well, one thing led to another and so far no jail time, but a fair amount of harassment in the form of citations, etc.  Julie took it to Facebook, where it went viral and now Oak Park officials are getting hate mail and phone calls and it's even gone international.  I think it's going to be all right, though.  The officials really want to back down.  They're just trying to figure out how to save face while doing it.
(Breaking news:  No jail time for Julie.  Charges dropped.  Still the matter of the dogs, though...)

And speaking of vegetables, did you hear the latest about Michele Bachmann?  (No, not the chutzpah thing.  But that was funny, wasn't it?  Is she the only person in the world who doesn't know that you have to hack up the "ch" like you would a loogie?)  No, this is a new revelation of an old story (2005), where Ms. Bachmann claimed she was terrorized and practically kidnapped by a lesbian and an ex-nun in a public bathroom.  As Mike Mullen wrote in City Pages, "Michele Bachmann, an ex-nun, and a lesbian walk into a bathroom sounds like the first line of a joke..."  She has a history of calling the police over rather silly incidents, but this one is one of the more hilarious.  Really.

A moment of Sublime:   The famous Norman Rockwell painting of little Ruby Bridges being walked by U.S Marshals into her newly integrated school is going to the White House.  Rockwell called his 1964 painting "The Problem we all live with", and it was among the first of his paintings depicting real, unadulterated problems in what had formerly been perceived as "Norman Rockwell country".  It caused a sensation when it appeared on the cover of Look Magazine, and is still a vivid icon of the civil rights movement.  It's a painting that brings tears to my eyes every time I look at it, and now it'll be hanging in a prominent place in the White House, at least while Barack Obama is president.

Ruby Bridges went on to become a civil rights activist, concentrating on the children who are in danger of being left behind.  She founded the Ruby Bridges Foundation "to promote the values of tolerance, respect and appreciation of all differences through educational programs".  That scared but brave little girl became the woman we cherish for her caring soul.  Sublime.

Cartoon of the week