FRIDAY FOLLIES: On Bachmann, Founding Fathers, Glenn Beck and Where Gays Come From

Happy Canada Day (formerly Dominion Day), July 1, and Happy Fourth of July (formerly Independence Day), July 4.  Both days celebrate independence from Great Britain, the only difference being we dropped the Brits in 1776 and the Provinces to the North went on bitching about them until 1982.

Sometime in the 60s or 70s I was at my aunt's house singing praises to Queen Elizabeth, thinking that was the polite thing to do, considering I was in Canada and it was Dominion Day.  Imagine my surprise when that tiny Italian spitfire snarled "Piss on the queen!"  There might have been a hand gesture, too, I don't remember exactly. Well, I was shocked!  By the time I came to my senses she was passing salami, prosciutto, mozzarella, Cornetti bread and Dago Red from Uncle Victor's wine cellar so I forgot to ask what she could possibly mean by that.  I'm sure she had her reasons.  (You know things are bad when whole countries don't want to be you anymore.)

I should ask Michelle Bachmann why we all wanted to be free of England.   (She might even know why my aunt was so mean to the queen.)  She knows all about the Founding Fathers, those guys who worked tirelessly to end slavery.  She tends to confuse founding sons with founding fathers, but I'm not here to pick nits, I'm here to find out once and for all why two out of three countries in North America went out of their way to give up their British citizenship when we're all so in love with the Brits we can't get enough of their music, their movie stars, their accents or their Royal weddings.

Oh, by the way, Glenn Beck said goodbye to Fox yesterday.  I know.  I don't care, either, but it happened and it's Friday Follies, and I have a happy Holiday houseful so I'm using it to fill space so I can go make potato salad.


And speaking of happy, I found this picture at a place called happyplace.com.  Thank you, Happy Place! 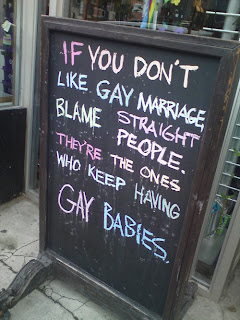 My moment of sublimely happy:  We are Ohio, a pro-union coalition, delivered 1.3 million signatures on petitions to repeal Senate bill 5, the anti-collective bargaining bill republican Governor John Kasich thought he had pushed through without a hitch.  Ha!


The coalition leading the effort to repeal Senate Bill 5 delivered a record of nearly 1.3 million signatures to the secretary of state today to place Ohio's new collective bargaining law on the November ballot.
A parade of more than 6,000, led by a banner proclaiming the "million signature march," rumbled through Downtown this morning.
We Are Ohio, the group leading the referendum effort, organized the march up Broad Street to Fourth Street, where a 48 ft. semi-truck carrying the 1,298,301 signatures in 1,502 boxes collected will be unloaded. The parade also included retired fire trucks, a drum line, bagpipes and loud motorcycles. It took about 15 minutes to pass.


The best part?  they only needed 231,000 signatures, so with that many signatures, they made it impossible for the petitions to be challenged, and impossible for the bill to become law before the results of the November elections.  Kasich and his bunch can slither, they can rattle, but they can't sink their fangs in.  Not this time.


Have a great Independence Day weekend.  Stay safe, be well, be back on Tuesday to give 'em hell.