Poor Old Detroit: Who is going to save it from itself?

Detroit is my unofficial hometown.  I spent more years in and around Detroit than anywhere else in the country. I loved growing up there, so it would be hard not to have feelings for the city now, even after all of the scandals, the neglect, the excesses, the tearing-down of beautiful landmarks, and the destruction of entire formerly lovely neighborhoods for no earthly good reason other than that nobody cared.

Even though I don't live there any longer, and haven't for years, I keep Detroit in my sights.  It's like an old friend gone weary and self-destructive.  All the hand-wringing in the world isn't going to save it from itself, but a friend is a friend forever, and often we delude ourselves by living on memories alone.  We just can't let go.

My adopted city has long been at the mercy of elected officials gone greedy and potentatish.  Once in office, the lot of them come to see the city coffers -- taxpayer money -- as their own personal gold-stores ripe for the taking.

Detroit Public Schools, the sole resource for educating the city's poor youth, has a dismal history of allowing the school board to spend much needed funds on fancy office furniture and through-the-roof expense accounts for exotic trips and chauffeur-driven limos.  (Dan Rather ran a two-hour special on the DPS in May.  They called it  "A National Disgrace".  That's putting it mildly.)

I was a student in Detroit Public Schools in the 1940s.  Our buildings were beautiful, and so were the grounds.  We had gorgeous conservatories and libraries filled with stacks of leather-bound books, made cozy and welcoming with huge stone fireplaces, polished oak walls and sparkling leaded-glass windows.  I can still conjure up feeling pretty special while wandering around inside one of those schools. 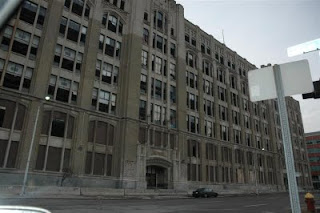 I don't know what happened -- the blame is often put on White Flight, on racism, on the movement of factories outside the city -- but whatever it was, all that was golden and promising in Detroit is no more.

I blame some of it on the dissection of the neighborhoods by ill-placed freeways, and on the serious lack of any kind of useful public transportation.  There simply is no way to use public buses to get around the city.  Huge sections are left to fend for themselves if cars are not available.

I blame some of it on the wholesale destruction of historic buildings and neighborhoods where, along with the demolition of thousands of tons of brick and mortar, a sense of belonging, of history, of continuity, was crushed beyond repair.

But I blame most of it on a lack of caring.  Jobs have left the city, leaving poverty behind.  Any attempt at gentrifying the city is met with suspicion and a lack of support from city services, including police and fire departments.  It's big news if a major chain looks to build a store in Detroit proper.  The bigger news is how many choose not to build in Detroit.

I know for a fact that there are people in Detroit who hate what has happened to their city and are working to make it better. (Eleanor Josaitis was one of them.  She passed last week and will be forever missed.)  Former basketball star Dave Bing is the current mayor, having taken over after Kwame Kilpatrick's reign as head poobah of one of the most corrupt regimes in Detroit's history.  I want to believe Bing when he says he's working hard to make life better in Detroit.  I want to believe him when he says he's investigating this latest mess concerning the outright theft of monies meant to go to the poorest of the poor. (See below)  I want to take him at his word, but when I see that he has warned his staff not to talk to the media about this, I would be a fool not to wonder why.

In a revelation that's almost hard to comprehend in a city as poor as Detroit, it's the city's Human Services Department that is currently under fire for personal and possibly illegal spending sprees.  The Human Services Department is the place where the poor are supposed to be able to get the help they need. Funding comes in the form of Federal Community Services anti-poverty Block Grants, which are meant to be used for employment, education, income management, housing, nutrition, emergency services and health, according to federal guidelines.

Instead, they've been used to buy top-of-the-line washers and dryers, refrigerators and freezers, a laptop computer, a Wii Fit game, and assorted gift cards, none of which ever benefited the poor. This is the same department that was under fire earlier this year for spending $210,000 of the block grant money to buy expensive office furniture.

Three employees of the Detroit Human Services Department, including the director, have been fired after a Free Press investigation revealed mismanagement and misspending.

Mayor Dave Bing announced the firings after the city investigated the newspaper's report that $210,000 in federal funds intended for poor people were spent instead on office furniture.
Bing said the investigation found nothing "fraudulent or criminal in nature" and then revealed that "most of the furniture purchases have been accounted for, however, two televisions and 10 computers have been determined missing."

Bing said the investigation found "a lack of oversight and poor inventory management."


Good Lord.  That's how Mayor Bing sees it.  It'll be interesting to see how the Feds see it.  An investigation follows some time this week.

Meanwhile, if that's not depressing enough, there's this story by former Free Press columnist Desiree Cooper in her "Detroit Diary".  She writes that, in modern Detroit, people are going to jail for stealing things like diapers, formula, and vitamins, and not being able to pay fines for taking a fish out of season.

"Long thought to be a relic of the 19th Century, debtors’ prisons are still alive and well in Michigan,” my good friend, Kary Moss, ACLU of Michigan’s executive director, said in a press release. “Jailing our clients because they are poor is not only unconstitutional, it’s unconscionable and a shameful waste of resources. Our justice system should be a place where freedom has no price and equality prevails regardless of a defendant’s economic status.”

But a 2010 multi-state study by the ACLU entitled, "In for a Penny," showed that Michigan is one of the biggest offenders when it comes to jailing people who are too poor to pay fines.

"Michigan, a state hit harder than most by the recession, is trying to find operating funds in the most unlikely of places: the pockets of poor people who have been convicted of crimes," concluded the report. "Though the Michigan Constitution forbids debtors’ prisons and state laws explicitly prohibit the jailing of individuals who cannot pay court fines and fees because they are too poor, judges routinely threaten to jail and frequently do jail poor people who cannot pay."


So stealing hundreds of thousands of dollars from a poor folks fund is simply "a lack of oversight and poor inventory management" but stealing a few dollars' worth of necessary food and goods, or not being able to pay a fine, is reason enough for a jail sentence?

Detroit in the 21st century. "Les Miserables" all over again, as Cooper says.  What makes it even more disheartening is that these stories and others like them are all the ammunition Gov. Snyder and his Koch-addicted bunch need to get away with appointing "emergency financial managers" to take over school districts and municipalities and give them to private interests to do with them as they will.  The question, as always, is will Detroit survive?  The answer, as always, eludes us.  It's up to the people now.  We'll see if they think Detroit is still worth it.