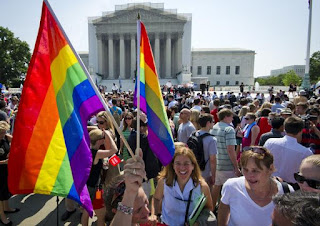 Yesterday the Supreme Court shot down state bans on same-sex marriage, effectively making marriage a federal affair, free from the capricious natures of the various legislatures or the rigid mandates of those who want to ignore the fact that legal marriage isn't of the bible, but is a civil, official, yes, secular matter.

The fuss against the ruling is about what you would expect, and it's all out there, of course, but here I want to revisit the evolution of the president; how he came to see that when two adults who love each other want to commit to marriage it's not a sin or a crime, it's a reason for celebration.

The big news yesterday -- no, the HUGE news -- was President Obama's interview with ABC's Robin Roberts, set up specifically so that he could air his own personal views about gay people being able to marry their same-sex partners:  After much soul-searching and a couple of decades of "evolving", he was finally ready to say out loud that he's all for it.

He did go on to say that it should be left to the states to decide their own policies concerning the legalities of such unions, but the die was cast; the mold was formed:  A sitting president took a positive, personal, public stand on the issue of gay marriage.

As might have been expected, the fundie leaders in the Right Wing Religiousphere took it hard.  Tony Perkins of the Family Research Council was all over the airwaves protesting the president's comments.   (Kudos to CNN's Soledad O'Brien, the product of mixed-race parents who married when most states outlawed such marriages, for turning an interview into a real debate, thus punching bloody holes in Perkins' many lame arguments.)

Small-government advocate and current Republican presidential candidate Mitt Romney came forward like the good soldier he is and said, no ifs, ands, or buts (for now) -- no, no, no to gay marriage, or even civil unions, or anything else that might require Big Government (that would be him if he wins) to step in and make more rules disregarding civil rights.

Leaders of states that probably weren't going to go Obama's way in November anyway jumped in to remind him that he was committing political suicide over this.

Some Black church leaders voiced their opposition to Obama's views, sending a message that might possibly still resonate in November.

So, yes, even though his comments to Robin Roberts won't amount to a hill of beans in the legal world and won't change a thing in the states that are rabid about banning gay marriage (Two days ago, North Carolina became the 30th state to ban same-sex unions), Obama's admission of his own personal feelings is the stuff dreams are made of.   Both sides will see it as a world class political haymaker.

But what made the president's comments so memorable was the fact that, while he would have preferred to sidestep this particular bombshell of an issue forever if need be, it appears it was his wife and his daughters who ultimately convinced him that, while he might be president of these United States -- an all-powerful position requiring the wisdom of Solomon and the unbiased judgment of, say, the theoretical Supreme Court, his earlier published views on the subject were about as wrongheaded as it gets.

They talked to him about love and how it works in mysterious ways, and his daughters let him know how much it hurt them that, by his own admission, the best he could come up with was that he was still 'evolving' on that particular issue.

There were many juicy quote-bites one could pull out of that interview, but this one got me right where my heart beats loudest:


"You know, Malia and Sasha, they've got friends whose parents are same-sex couples. And I-- you know, there have been times where Michelle and I have been sittin' around the dinner table. And we've been talkin' and-- about their friends and their parents. And Malia and Sasha would-- it wouldn't dawn on them that somehow their friends' parents would be treated differently. It doesn't make sense to them. And-- and frankly-- that's the kind of thing that prompts-- a change of perspective. You know, not wanting to somehow explain to your child why somebody should be treated-- differently, when it comes to-- the eyes of the law."

Okay, I'm a sucker for a good dad, no matter what kind of house he lives in, so it's understandable why I might latch onto that one particular part of the conversation.  But I watched the entire interview; I watched the body language and listened to the tone of voice.  I saw an everyman wrestling with his ethos, not a politician striving to convince, and I rejoiced.

But--I'll grant you--it didn't hurt that Joe Biden, our beloved, wacky veep, got to gushing about his own feelings on gay marriage on Sunday's "Meet the Press".  The next day the Washington Post's Dana Milbank called it a "gaffe" (a word that seems to cling to Biden as tightly as his own shadow) and the press took off running.  (Note to Joe:  It's far better to be gaffe-prone than to be mean-prone.  So far, you're okay, man.)


The vice president said he is “absolutely comfortable” with same-sex marriage, committing the classic Washington gaffe of accidentally speaking the truth. This bit of straight talk made Obama’s position — neither for nor against such unions but in an evolutionary state, not unlike the Galapagos finch — all the more untenable. On Monday, Biden took off for a campaign event in Tennessee, leaving Carney on cleanup duty. But the more Carney swabbed the mess, the more it spread.

I frankly don't get it.  How exactly did Joe Biden's own personal views on gay marriage conflict with anything the president might have said about that same issue?  There is no actual blending of the pair, simply because they're Leaders One and Two.  They aren't contractually obligated to agree personally on all issues.  I didn't see it as "one-upping" the president, I saw it as Biden being Biden.  Especially when he got to the part about "Will and Grace".  (Debra Messing ("Grace") says it's right up there in the top five moments of her life, so you see, it's striking chords everywhere. )

Well, apparently even the president felt that Joe had overstepped "his skis" or some such.  But publicly he's okay with it, and I get the feeling that he, like me, loves old Joe, gaffes and all.  (And who wouldn't?)

Immediately after the Sunday news hours, it was out there, people were talking, and the entire White House had to grind to a halt and address the elephant in the room.  Does the president support gay marriage or doesn't he?  So on Wednesday, President Obama sat down with Good Morning America's Robin Roberts and talked at length about the issue he had so studiously worked to avoid.

Yes, it was calculated and ultimately political, but the essence of it, the way the president chose to address it, was as much heaven to me as it had to be hellish for his political opponents, those so intent on ousting Barack Obama they have no problem casting him as evil incarnate--the devil himself

I saw a man who might finally understand that there are times when it's not only essential but soul-satisfying to separate the thoughts of the person from the decisions of the presidency.  And that "evolution" doesn't work as a handy substitute for equivocation.  And that sometimes political expedience isn't all it's cracked up to be.

My mother was Finnish-Lutheran and my father was Italian-Catholic.  They celebrated their 50th wedding anniversary just nine months before my mom died, and they loved each other to the end.  What if the powers-that-be had arbitrarily decided that Finns and Italians couldn't marry?  Or that Lutherans and Catholics couldn't marry?  How different is that from deciding that blacks and whites couldn't marry or that same-sex partners couldn't marry?  They're all consenting adults with the capacity to love one another, and if marriage is the desired tie that binds, it's a sad and sorry law that seeks to outlaw fidelity instead of celebrating it.

I think the president always got that.  He only just now, thanks in part to the women in his life, found the cojones to say it out loud.
Posted by Ramona Grigg at 3:09:00 PM