I guess you've heard that the Rightward so-called Christians have a flag, yes, a flag, and some of them think it would be cool to fly it above the American flag on the same pole, even though flag etiquette has said forever that no flag should fly above Old Glory.  Their reasoning?  Something about God coming first, which they assume any good American should obviously recognize. 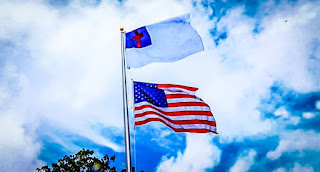 As a citizen of these United States of America, were you as floored as I was by this?  Oddly, or maybe strangely, I didn't even know Christians had a flag.  (Apparently, it's been around since 1897.  I must have missed that part. I know for a fact, though, that it has never before been used as a protest flag to be flown, Heaven forfend, above the American flag.)

Something is happening. These people who claim to be operating as Christians are scaring the hell out of me.  Somehow our inexorable move into the 21st Century changed everything and the Christian Right is not satisfied with being nice and kind and following the Ten Commandments or the Golden Rule or following the words of their Lord Jesus Christ, who said, and I quote:

Or, as the King James version sayeth it:

No, these new "Christians" see the quest for their version of morality as the war to end all wars.  My idea of morality may differ from theirs, but theirs is Right and mine is wrong.  If it were only a difference of interpretation, that would be one thing, but because I don't go along with their version of Playing Well Together (Or Else) I am now the enemy.

I admit I've never thought of myself as the enemy of a Christian.  This is new for me.  Some of my best friends are Christians and I love them madly. For that reason, I've underplayed my anger at those who operate as haters under the guise of Christian love.

No more. So here goes:

The people who proudly call themselves "the Christian Right" may say they're Christians but I've known Christians and they're no Christians.  They are the worst kind of hypocrites.  The bible is a book of stories, some inspiring, some fascinating, some downright ugly.  The Christian Right uses the ugly parts as proof that God wants them to discriminate.  They argue that women have no rights, that minorities are inferior, that different kinds of love are sins worse than murder, and that liberal education is the work of the devil.  They claim religious persecution while they themselves revel in their roles as righteous persecutors.

They've scared our political leaders into kowtowing to their sick and sorry excuses for societal morality to the point now that bills must pass the Christian test before they can move on.  Their greatest triumph is that no matter what they offer up, if they offer it up as an edict from God, thy will be done.

Their proudest achievement is the almost total allegiance of the entire American political body to an idea that in order to govern one must be religious--preferably to the Right, but any claim to religion will do.

They will tell you with great confidence that atheists will never win a public office.  They have finally eradicated secularism from government.

In their minds, it's a done deal.  I would hate to think they're right.

Breaking News!  OMG, didn't I tell you? This just in:


Many ministers do their best to stay away from politics when they preach, but hundreds of conservative pastors around the country are so upset about what they see as a moral crisis in government that they are preparing to run for public office themselves, with the goal of bringing "biblical values" to the political arena.

The initiative is led by David Lane, a born-again Christian and self-described "political operative" who has organized four large-scale training sessions in which evangelical pastors are tutored in the practical aspects of running a political campaign.

All righty, then.  Break time is over.  Back to work.


(Cross-posted at Dagblog and Liberaland. Featured at Crooks and Liars MBRU)
Posted by Ramona Grigg at 9:54:00 AM