No More Making Fun of the Iowa Straw Poll. Except This One Last Time 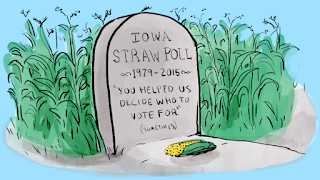 Just got the news that Iowa has decided to dump their traditional GOP fundraiser, their presidential-hopeful-quasi-indicator-of-nothing, their old-fashioned, hilariously awful Iowa Barbecue and Straw Poll .  I thought I would be happy when they finally took my advice and got rid of that thing, but now I feel sad.  I've laughed so much over their shenanigans, I feel the way I do whenever a favorite comedy show bites the dust. Sad, but so glad for the memories.

Here, then, is my memory of the 2011 Iowa Straw Poll festivities, first published the day after the Party's big party.

There will always be Iowa. . .

Andy Borowitz in the New Yorker:

While the effects of such an extraordinary measure are hard to predict, experts say the IQ downgrade could result in Iowans having difficulty completing sentences or operating a television remote.
“This downgrade would be very upsetting to Republicans in Iowa,” said an S &amp; P spokesman.  “Fortunately, there’s no way they’ll understand it.”

At the Fairgrounds, where the Big Barbecue was going on, Ron Paul had something called the "Prosperity Playground", where you could slide down the "Sliding Dollar" slide and just be a kid again. 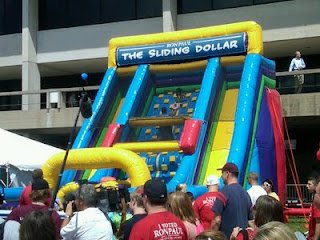 The Ames Patch took to judging the candidates' tent sizes. (Link no longer available.)  Thaddeus McCotter's may have been the smallest, at an embarrassing 30x30 feet,  but Tim Pawlenty's took the prize as the largest, at 200 sq. ft. over Michele Bachmann's 10,000 foot air-conditioned whopper. 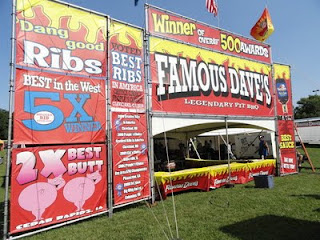 I'm hearing rumors this morning that Pawlenty is already thinking of dropping out of the race, so I hope he had a great time there in Ames.  Something should come out of all that effort, at least. (News flash:  It's true.  Pawlenty has dropped out.  Of the entire presidential race! All because of the Iowa Straw Poll!  Am I going to have to rethink this whole thing?  Am I just not getting it??)

Okay, I started this out absolutely refusing to even consider including that truly awful, truly obscene un-Photo-Shopped photo of Michele Bachmann deliriously munching a very long corn dog, but I changed my mind.

But I will say this:  What happens in Iowa should have the decency to stay in Iowa.  Really.