What's Next For Caitlyn Jenner? 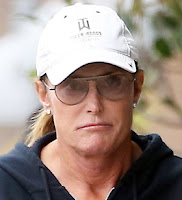 Olympic gold medal winner Bruce Jenner, known more recently as the beleaguered stepfather to the Kardashian clan on the reality show, "Keeping up with the Kardashians", has begun the transition to become a woman, choosing "Caitlyn" as her female name.

News of the transition was, let's be honest, mind-boggling.  Some saw it as nothing more than a weird cry for attention.  Jenner was, after all, the odd man out on a reality show based almost solely on sheer vanity.  Female vanity.
I know almost nothing about Bruce Jenner's past history and I've never watched more than 10 minutes of the reality show, but if Jenner says she never felt comfortable as Bruce, I have no reason to doubt it.  It could be that, now, at age 65, the need to be the person she really is became all the more compelling.  As we age we look forward, not back.  We get it that time is running out.  If we're ever going to do the things we've always wanted to do, we should have started yesterday.

It takes guts to open up to the need for a gender change. It means a complete and total make-over, the likes of which most of us can't even imagine. Intensive psychological testing is required, often for years, before the last radical change--genital surgery--takes place. But the transition begins the moment the candidate accepts that their birth gender is not and never has been who they are.

Hormone therapy begins the transition and the results can be startling.  The voice changes, the body begins to transform, the mind gets comfortable with this new person.  But, because they live among other people, and because what's happening will require some explanation, it's the beginning--the coming out--that requires the most courage.  Not everyone will understand.  Some will laugh at such a thought.  Some will be sickened by the whole idea.  Knowing this, many of the mis-gendered will take the steps to change, anyway.  It's hard enough for folks who aren't famous, but, for someone like Jenner, the public transition requires skin as tough as hide.

Caitlyn Jenner is on the cover of this month's Vanity Fair.  Buzz Bissinger wrote the story.  Annie Leibovitz took the photos in a session kept secret until the photos were released just days ago. Jenner has breasts and a sculpted waist.  She has long hair and feminine cheek bones.  She looks like, and is, a beautiful woman.

So why am I troubled by the Vanity Fair feature?  Maybe because I had hoped for a piece that might have celebrated Jenner as a whole woman and not just a sex symbol.  I understand wanting to feel feminine and sexy--even or especially after having to hide that part of you for over six decades.  I'm not suggesting a modest cover-up until the world gets used to the idea.  The part of the world that isn't used to the idea will never get used to the idea.  But am I the only one who saw the cover and immediately thought "Ack! Kardashian"?

I read that Annie Leibovitz was in tears at the end of the photo session.  She wanted to get this most important unveiling right and in the end she felt she nailed it.  Leibovitz is a brilliant photographer and the photos are beautiful.  But there is still, for me, an uneasy feeling that unless Caitlyn moves in another direction her appearance will be all there is.  And it won't be enough.

I was in high school in 1952, when George Jorgensen went public with the news that he had undergone multiple sex-change surgeries in Denmark and was now a woman.  Her new name was Christine.  The New York Daily News cover story was headlined, "Ex-GI Becomes Blond Bombshell". The circus that followed was unrelenting, and the poor woman became the subject of ridicule and outright hatred far beyond what should happen to a person whose life had caused nary a single hurt to another living soul.

It dogged her for the rest of her life.  She wondered at one point if the doctors had made her a woman or a freak, and that line became the headline on a poster advertising the dreadful 1970 movie about her life.  She opted for glamour and was always photographed perfectly dressed, perfectly coiffed, perfectly made up.  Being a woman was her full time job.

But it turned out she was much more than that.  She was a pioneer in transgender awareness and acceptance.  There have always been gender identity issues, but Christine Jorgensen allowed every aspect of her transgenderization to go public, not for titillation but for science.  She wanted people to understand both the need and the process, and there is no doubt that her honest approach opened the doors and made it easier for others to follow.

I began working at the University of Michigan Hospital soon after they opened their first gender clinic in the mid-1970s.  We shared offices for a few months while ours were being renovated and there I met many of the men and women seeking to find their gender fit.  The doctors were heroic mavericks, constantly fighting against both personal and funding threats in order to establish that gender identity is not fixed in stone; that God and/or Mother Nature can get it wrong.  I never saw such longing, such determination, such bravery.

What Caitlyn Jenner needs to understand is that there is more to being a woman than the sum of her outward parts.  True womanhood isn't what is shown on a reality show featuring beautiful creatures obsessed with how they project themselves to a sector obsessed with outward beauty and not much else.

For all intents, and because she says so, Caitlyn Jenner is a woman, but what will she do now?  How will her womanhood manifest itself?  Who will she become now that she knows who she is?

A reality show is already in the works.  On the trailer, Caitlyn says, "Isn't it great that maybe someday [I'll] be normal?  Just blend into society. . ."  A voice off camera:  "You are normal."  Caitlyn:  "Put it this way:  I'm the new normal."