I awoke yesterday to the news that Beau Biden has lost his battle with brain cancer.  The pain I felt, even though I didn't know Beau Biden personally, was a visceral as if I had lost a dear friend.  It's no secret that I adore his father, Joe, and much of what I'm feeling, I'm feeling for him.  (I wrote about him here.)  The grief, the sorrow, must be awful.  He lost his first wife and his small daughter in a tragic car-truck accident, and nearly lost Beau and his brother, Hunter. He should not have to endure another loss of a beloved child. 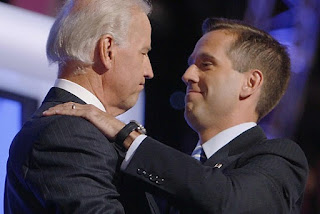 I grieve for Beau's family--his wife, his two daughters. A good man, loved by many, is dead at age 46.   But I've been thinking about this:  I grieve for all of us. We've lost a man who, under the right circumstances, might well have risen through the political ranks and helped to bring goodness and mercy to our besieged land.

He saw combat in Iraq.  He was a JAG lawyer.  He played it fair in every aspect of his life, and, as far as I know, never sought to harm anyone.

In 2011 he gave a speech to the law school graduating class at his alma mater, Syracuse University.  He titled it,  "The Means Matter".  In it, he said this:


Nearly ten years ago, an assistant attorney general in the U.S. Department of Justice wrote a now famous memo that defended his client’s desire to use ‘enhanced interrogation techniques’ as the means to achieve an end that was indisputably important.

At [the] same time, military lawyers (jags)—those who not only know our interrogators but also know the American troops who could one day be interrogated by the enemy—disagreed with their client’s desired means and wrote a strong repudiation of these techniques.

Together, these two legal opinions, from very smart and patriotic lawyers, form an excellent lesson: it is exactly when the stakes are the highest that the means matter most.

Or, as Republican Senator Lindsey Graham, himself a military lawyer said at the time, ‘That there are certain corners you cannot afford to cut because you will wind up meeting yourself.’

The question of ends versus means is presented all the time in the practice of law. When the world thinks of lawyers, not everyone thinks of Atticus Finch, but they should. We want counselors who fight for what’s ‘right,’ but we live in a culture where lawyers too often fight for what the client demands, and the more powerful the client the more compelling the demand. Our ability to rationalize cannot be underestimated.

As Senator Graham, and the military lawyers know, if the rules are not clear, a slope has been oiled. And when slopes are oiled, you can only ride them in one direction. Do not rationalize.


He was on his way and he was on our side, and now he's gone. My hope is that we'll remember him as a true public servant--a hero for the working class, for the disadvantaged, for the misunderstood, for the people he spent his short life working to protect--and keep his legacy alive.


"That was the most striking thing about him. He was just innately kind. He had a complete aversion to ever hurting anyone's feelings," said Terry Wright, who worked for Joe Biden as a special assistant and has known Beau since 1982. "Politics is a rough business and Beau just never wanted to hurt people's feelings.

Rest in peace, dear man.  May your goodness shine on.