Without Unions There Would Be No Labor Day. And that's the Least of It.


Every Labor Day I feel more and more like I'm at a labor union wake and all I can do is pay tribute to what once was a living, breathing, cherished part of so many of our lives.

Our lives. Workers built this country and labor unions went to bat to build protections for them.  As labor unions grew, so grew labor's strength. Wages rose to sustainable and beyond, benefits were true safety nets for workers and their families, the promise of healthy retirement packages kept worker loyalty high, and self-respect grew to levels where employees could demand and get concessions from their employers.

No, their downfall began when they believed it.

I'll be blasted any minute now by supporters of the notion that U.S workers were their own worst enemies, fighting against outsourcing and offshoring, against lower wages and benefits, against any action their employers might take in order to make a profit. They asked for too much and forced their employers' hands. Now look were they are.

Okay, let's look: (From an article by Richard Eskow, "How Much Will the War on Unions Cost You This Labor Day?)


If union enrollment had remained as high as it was in 1979, nonunion working men in the private sector would have earned an average of $2,704 more per year in 2013. The average non-unionized male worker without a college degree would have earned an additional $3,016, and those with only a high school diploma or less would have earned $3,172 more. (The differences were less striking for women because of workforce changes since the 1970s.)

The decline in union membership is costing nonunion workers a total of $133 billion per year, according to EPI.

Canada resembles the U.S. in many ways, but union membership there hasn’t fallen like it has here. Why not? In a word, union-friendlier policies – the kind our country should be embracing, but isn’t.

We need unions. EPI’s study confirms that they play a key role in reducing economic inequality, which is a growing crisis. The pay gap between CEOs and average workers has skyrocketed in recent decades – from about 20:1 in 1965 to somewhere between 204:1 and 331:1 today.


Everyone talks about the plight of the workers but nobody wants to talk about unions--about the role collective bargaining plays in worker rights and better wages; about the role unions once played in building a vibrant middle class.

So here's a test: Picture what this country would look like if unions had never existed. Imagine the lives of workers and their families if millions of their peers hadn't organized and fought, not just for pay equity, but for the dignity that comes from laboring as an equal with a stake in the outcome.  Ask yourself, were we--are we--better off with or without unions?

Labor Day began as a day to honor trade and labor organizations.  Huge parades designed to show the might of labor took place in cities across the country. I remember, as a small child, riding on my father's shoulders, watching a Labor Day parade in downtown Detroit, where row after row of union men and women marched in the hot sun, carrying flags and banners emblazoned with the names and numbers of their union locals.  It might even have been this one: 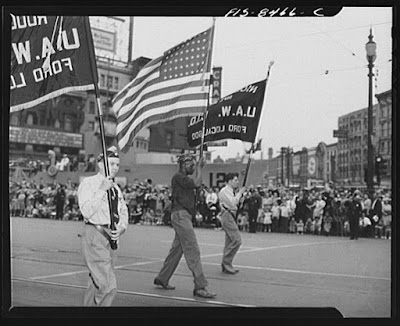 Detroit was a town bursting with union pride. Whole families worked for the Big Three, most of them starting there fresh out of high school.  Many of them worked their full 30 Years And Out. Wages were good and benefits were better. Company loyalty was pervasive and public.  They wore their company names and union logos on their jackets, on their caps, and put union stickers on their cars--the cars they could watch being built from start to finish on the assembly line.

This year Bill Clinton will be the headliner at Monday's parade in Detroit. I hope he stops long enough to get an earful from the union folks working hard for Hillary in hopes that she'll work hard for them. I want to hear that word "union" attached to any mention of labor from now until November.

And next year, on Labor Day, I want to be rejoicing here and not commiserating.  I want attention to be paid to the workers still grinding away, building us up instead of tearing us down.  I want them to feel their worth, to know they're needed. I want to shove aside once and for all those who do everything they can to stand in their way.

Have a happy Labor Day weekend, but come Tuesday let's get back to work.  All together now, let's give labor a chance.

(Cross-posted at Dagblog and Crooks and Liars)
Posted by Ramona Grigg at 8:02:00 PM