How Hillary Can Appease The Press

So why did Clinton's people try to hide her condition? That's pretty easy: After months of baseless health speculation by Donald Trump's rumor machine, she figured the press would go full National Enquirer over this. She didn't trust them to handle it in a normal, level-headed way. 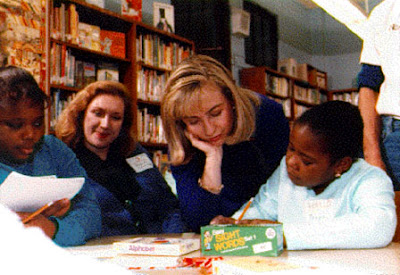 I've been thinking for a long time about the ways Hillary Clinton might possibly appease the press and get them to look at her as a living, breathing whole person and not just Bad Hillary. I think I've finally got it.

She needs to stop being who she is and be someone else.  She could change her name to--I don't know--Mother Teresa or Mother Jones or Jo Schmo from Kokomo.  It's clear she can't go on as Hillary Clinton.

The Hillary she has lived with all her life has to go. The private Hillary can no longer compete with the public Hillary whose persona, crafted over more than 25 years by people who don't even know her, has now become a caricature. It's incredibly difficult to run for president as a caricature, even with an opponent as cartoonish as Donald Trump.

(Here I could say a few thousand words about Donald The Deplorable and never take a breath, but enough about him. I mean. Seriously. Enough.)

So here, for what it's worth, is my suggestion to members of our esteemed Fourth Estate: How about pretending the woman running for president isn't named Hillary Clinton?  How about taking a long, thorough look at that woman's record--whoever she is--to see if there is anything, any little thing, that might qualify her for the highest job in the land?

It's on you to be honest about both the pros and cons of this woman who, for this exercise, is not named Hillary Clinton. This woman has been in public service nearly all of her adult life.  She was a lawyer first and then she married a man who became the governor of Arkansas and then became the President of the United States.

This woman who isn't named Hillary Clinton has indefatigable energy but doesn't brag about her accomplishments. She's not the best at public speaking but aces it one-on-one and in small groups. She laughs a lot, sometimes even at herself.  She's pretty damned popular both here and around the planet.

There are people who hate her but the numbers are lower for her because her name doesn't carry the stigma created and maintained by a real, honest-to-goodness vast Right Wing conspiracy.  She makes mistakes, some of them true head-scratchers.  She says dumb things she often has to take back.  She has been known to consort with filthy rich people who probably want favors from her, and with celebrities who are known Liberals. But she's just one among hundreds of other politicians who don't have to answer for their every waking moment, so it'll be okay. Since she's not Hillary Clinton, she'll be able to concentrate on talking about her dreams, her wishes, her goals for the country.

(She may even be able to struggle through a bout with pneumonia without several days of full-bore "breaking news", not so much about her prognosis but about her lack of due diligence when reporting it to the hovering, stalking press.)

There is a real Hillary Clinton, almost identical to this woman, but if you, as members of our venerable press, want us to believe you've been looking for her, you're going to have to work harder at convincing us. Put away your magnifiers and look at the whole woman before you. Analyze controversies, don't create them. Report truthfully about what you observe. Include context. Let molehills be molehills.