A Deplorable Thought: Trump Could Win

I was standing in line at the grocery store yesterday looking at this National Enquirer cover, trying to convince myself I'm too old to be horrified by these things anymore. It made me queasy and a little breathless but I managed to get past it and move my groceries from my cart to the belt. 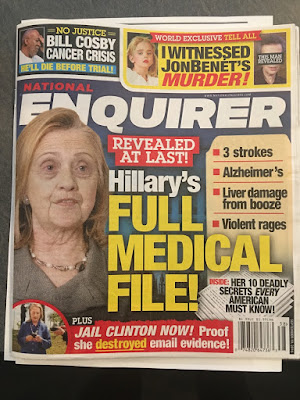 When I heard a woman behind the guy behind me gasp and say, "Oh, my!" I knew without a doubt she was looking at that same tabloid cover. She was an older woman.  An "Oh, my!" sort of woman. Tiny, a little stout, a puff ball of snow white hair surrounding a sweet rosy face.  I couldn't quite hear what she was saying but I heard "Hillary".  She laughed then. She said something to the people behind her and they laughed, too.  Then she said, loudly but nicely,  "I would never vote for her, anyway!"

Well, okay. I live in Red Country.  Blood red. So red I'm not just surprised, I'm shocked whenever I meet someone who can admit out loud they'll vote for Hillary.  The Democrats up here don't flaunt their political preferences, they whisper them.  It's as if we're members of a secret cult, never letting on who we really are unless we know we're on safe ground, in the company of others like us.  Putting up yard signs for Democrats is an act of courage.

But the sweet lady in line behind me wasn't quite finished. She said something else to make the people behind her nod and laugh, and then turned back to where I could hear and threw this out: "I guess I'll just go on being deplorable."

She wasn't talking to me, of course, but it was a direct hit, a punch in the gut. The cashier handed me my change. I moved a few steps away and stood there. For many seconds. What could I say to change the mind of this woman who, I just knew, brought dishes to sick people and sent greeting cards? Okay, she may gossip a bit and look down her nose at people who get food stamps, but a Trump voter?  Inconceivable.

I left, of course, without saying anything. No magic words. What could I tell her that wasn't already out there? But I'm haunted by that woman. In another time she would be as appalled by that man as I am. Our politics might always be opposing, but on this we could agree: Never Trump.

What changed?  Do these people, nice as they may be in their private lives, really think Donald Trump would make a good or even an adequate president? Is Hillary hatred all it takes to make the thought of four years of a Trump presidency acceptable? Can't they hear him?  Don't they see he's fueled by power and hate and it consumes him?

Or is this all it takes? 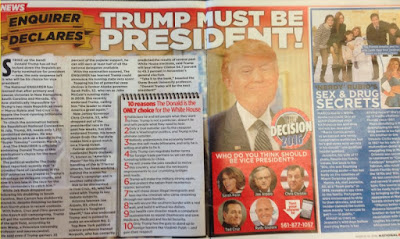 For all the watching and reading I've done during this presidential campaign, trying to make sense of the rise of Trump so we could finally figure out how to fight him effectively, it took a brief encounter in a grocery line for me to finally get the message:  He could win.