Donald Trump is Not Redeemable. He Cannot Be President. 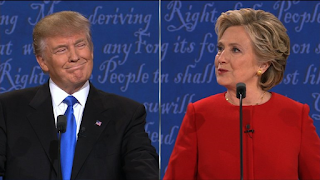 The first debate between Donald Trump and Hillary Clinton is behind us now and, except for the usual tiresome trolls, the racists, the bigots, the misogynists, and a few souls who genuinely want to believe a cruel, crass billionaire will be their saving Messiah, the consensus is that Hillary whomped The Donald, slammed him to the ground, and wiped the floor with him. Like a rag mop.

He thinks he can stop the presses if journalists keep being mean to him.

He thinks he can shut down regulatory departments because he's a businessman and he doesn't like regulations.

He foments mistrust and hatred for people whose color and religion don't match his.

He thinks he'll own NATO and can force world leaders to bend to his will.

If despots praise him, he'll praise them.

He has to be told the world might end if we use nuclear weapons.

And on the personal side:

He dodged the draft and calls John McCain a loser because he was a POW.

He brags about forcing a sitting president to produce his birth certificate.

He calls women "fat pigs" and "Miss Piggy" and defends his reasons.

He thinks women who have abortions should be punished by the law.

He mimics a disabled reporter and makes fun of anyone who doesn't get his sarcasm.

He eggs on his crowds to physically attack protestors and offers to pay their fines.

He stiffs people who work for him and blames them for their own misery.

He slimes anyone who goes against him and brags about his insults.

He warns there is nowhere he won't go, nothing he won't do if he feels threatened.

He cannot be president.