My mother Lived a Life

My mother was born on this day in 1918.  It was the year the influenza epidemic spread across the world and became a pandemic.  By rights, and in a more populous locale, my mother might have sickened and died before she ever had a chance at life.  She was a skinny, spindly little thing who always looked undernourished in early pictures.

She was born at home in Fulton Location, a company town in Michigan's Keweenaw Peninsula that existed because the copper mines were in full swing and thriving then.  At the time she was born, her father was a "mule" deep in the mines, a trammer, a dirty, lowly job relegated to the Finns and other Eastern Europeans by the Cornish bosses because the "foreigners" couldn't or wouldn't speak English and were barely understood.  In the human chain, in that place, they were considered the least.

My grandfather was a proud man--too proud for that time and that place.  He eventually worked himself up to foreman, a job almost unheard of for a Finn, but he never got over the slights.  He drank too much and could be cruel to his wife and four children, but if he had a favorite, it was my mother, who looked the most like him.  Still, it didn't save her when it came to her schooling.

Fulton Location was a place where only Finnish people lived.  It was so remote from anything American, my mother didn't speak English until she went to school.  She learned, and loved school, and thrived there. 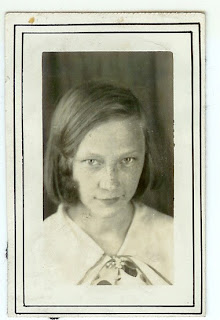 In the summer, after her eighth grade graduation, her father told her she was done with schooling and she would have to go to work cleaning other people's houses.  Somehow, the principal heard about it and went to their house to try and talk my grandfather into letting her continue.  It didn't work, but my mother was always proud of that--that someone in education would try and fight for her. (That was all I ever knew of the story, but I used it as a chapter in my unfinished novel, "The Year of Lost Men")

I've written about her marriage to my father before, but here I want to talk about Irene as my mother and as a woman.  She was 19 years old when I was born, and they had no money, but somehow my father managed to ship her the 600 miles from Detroit to Fulton so that she could be with her mother and I could be born in a hospital that wouldn't charge more than they could afford.

She nearly killed me when I was an infant because she insisted on breast feeding me when she had no milk.  There was a time when they had so little money we all subsisted on oatmeal, and it wasn't long before I began to suffer from malnutrition.  I survived, I thrived, but I was still hearing my mother apologize for not knowing enough to take better care of me when I myself was a grandmother.

She had no formal schooling beyond the eighth grade, but that didn't stop her from learning.  She and her sisters played a word game all of their lives, where one of them would choose a new word and they would have to use that word in a sentence as often as they could for an entire week.  I remember that one of the words was "regurgitate".  They laughed themselves silly over that one.

Maybe it was her impoverished background, but she loved beautiful clothes.  Her oldest sister worked for a rich Chicago family and would send my mother their cast-offs, which she wore with movie-star flare.  When I was in the fourth grade (still an only child, since my brothers weren't born until I was nine and 13, respectively), she went to work at a dress shop, where she could buy the on-sale clothes at an even greater employee discount.

It only lasted for a while, but I had to come home by myself for lunch, and I would find the radio on, tuned to "The Kate Smith Hour".  My lunch would be set out on the table, always with some cute little thing that would make me smile.  She might peel an orange and segment it and make a stick man from it, holding a carrot walking stick or wearing a pickle hat.  When Kate Smith sang "When the Moon Comes over the Mountain" I knew it was time to get back to school.


Later, when they bought a house with a basement, she set up her own beauty shop, having learned to cut and style hair almost by magic.  She had a thriving business going until a neighbor turned her in for operating without a license.  She fixed that.  She went to beauty school and got her license and worked legitimately at a profession she absolutely loved until she developed what seemed to be emphysema but turned out, in fact, to be lung cancer.

She never voted, but was a liberal in the best sense of the word.  She understood and could argue for the labor movement, for childrens' rights, and, in the 60s and 70s, for the Women's movement.  Ironically, the women she wanted to see liberated would have been disgusted by the lifestyle she chose for herself.  She never learned to drive, and my father did all of the bill-paying and grocery shopping.  Her house was as neat as a pin, and she kept Lestoil and Clorox in business, so fussy was she about laundry.  She was a housewife and a hairdresser by choice.

She had a lovely singing voice and was mad about Perry Como and Tennessee Ernie Ford and Yma Sumac.

She liked beer and cigarettes, and only gave them up when she was finally forced to by the cancer.  But here's the amazing thing:  I never liked beer, I never smoked a cigarette, I was the farthest thing from a fashion plate she might ever have imagined, my house would never pass a white glove inspection, I could take Perry Como or leave him, and I didn't do the one thing she always hoped I would do--get a college degree.  But she loved me anyway, always and forever.

She adored my children and her great-grandson, who had the privilege of knowing her before she died at a too-young 68 in 1986.  She loved my father and her sons, her nieces and nephews, and anyone else who entered her life and stayed there.

She lived a life. 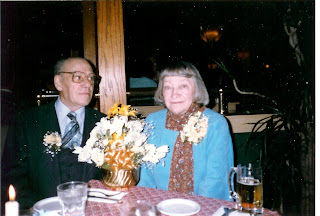 Irene and Ralph at their 50th Anniversary celebration
six months before she died
*
*
Posted by Ramona Grigg at 10:13:00 AM