Friday Follies: The Smalls, The Bigs, and On Wisconsin

This week DARPA unveiled its newest entry into the spy game, the Nano Hummingbird.  The teeny, tiny $4 million prototype flew around a parking lot and then through a standard-sized door, all the while showing us on a small screen what it was seeing through its teeny, tiny eyes.  The hope is that it can be used for reconnaissance and surveillance without anybody noticing, as it zooms in at eight miles per hour and gathers info we might find useful.

They were talking about it on the local news this morning, and one of the news guys said, "I'll tell you what, though.  It could change the way we fight wars.  A fly swatter could become a weapon of mass destruction."  (I'm calling that a new high in ad-libbing.)

***
So, I guess you've heard about the news anchors in Australia?  They were talking about some teeny tiny urn that seems to be a prized trophy for something, when the female anchor turned to the male anchor and, okay, insulted his manhood.  I've been waiting for some sort of explanation, because, ohhh, that's cold!  But it's Friday and none is forthcoming, so here I am, talking about it along with a couple of jillion other people without knowing the back story, or even whether what Belinda said about Mark is true.

***
And while we're on the subject, did you hear about the naked sausage burglar?  It happened about a month ago, but they've just released the videotape.   Nobody knows why he's naked, but they recognized him as a guy who lives in the woods behind a Lee County, Florida retirement community clubhouse.  The sausages were going to be served at the weekly Bingo game, but when the cook went to get them, they were gone.  A camera caught the whole thing, and the guy was arrested.  I don't know, though. I thought it was a new high in Senior Citizen entertainment.  Almost better than Bingo.

Ever wondered what you could buy with a billion dollars?  It used to be we could count our millionaires on two hands and a few toes.  Now, with the economy tanking and when we're one step away from bread lines and apple sellers, we're finding that a billion-dollar-a-year salary is just so-so in some quarters. (According to a story in Forbes, March, 2010, there were 403 American billionaires, including the Koch brothers.)  Dave Johnson (one of the few reasons I go to the Huffington Post) wrote a piece about what a billion dollars could buy.  If you think the naked sausage burglar video is obscene, you ought to take a gander at this.

***
So I was already cranky after reading Dave Johnson's piece,  but when I saw what was going on in Wisconsin, I perked up a bit.  I love Wisconsin.  It is practically a cousin to Michigan, my Michigan, and, along with Minnesota, we're a triad of unpredictable eccentrics.  How Wisconsin ever let themselves get talked into electing a Tea Party governor is beyond me. . .but then I don't have a whole lot of room to talk, since Michigan now has a Republican governor when we could have had Virg Bernero, who not only would have jump-started us, he would have made sure we had fun doing it.

Anyway, this new Wisconsin governor decided it was his duty to shut down any hint of collective bargaining among public employees, since he was against any form of collective bargaining and he was the governor.  It seemed logical to him, being a Tea Partier and all, but imagine his surprise when the public employees said, "What?  Who?  Us?? Uh uh."  They stormed the Statehouse and filled it to the rafters, and thousands more marched outside, and it became a huge damned event.  Fourteen of the Democratic state senators left the state to keep a quorum from happening so that the anti-collective bargaining bill could not be passed, and it's been one thing after another ever since.

The fleeing senators ended up in Illinois, where they bumped into a Chocoholic Frolic and  caused a leprechaun to be chased by a reporter.  The press found them, so they left without checking in, and now nobody seems to know where they are.  But,even though they're at an "undisclosed location", they're talking to Rachel Maddow and Ed Schultz and they sound like reasonable folks to me. But then I'm a Michigander, and you know how we are.

Best picture of the week, hands down: 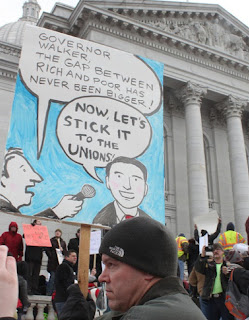