I'm in the midst of unpacking bins and boxes and suitcases and looking for the cord for the printer and for the thingy that lets me plug in a bunch of USB cords.  That is, I should be in the midst of those things.  Instead, I'm thinking about my dad on the 100th anniversary of his birth and I'm thinking about a couple of memorable quotes from Mark Twain and Spongebob Squarepants.  (I thought about quoting Joe Scarborough, who couldn't think of Walter Reuther's name this AM while he was knocking the unions, but I want this to be a positive, maybe even fun blog and tomorrow's another day.)

I jumped the gun and wrote about my dad last year on his 99th birthday.  I knew I should have waited for the Big One, but I was feeling it then (just as I'm feeling it now).  Out of a family of 12, only his two baby sisters are left.  One is 83 and the other is 91.  They have skin like velvet, even now, and if they ever lose their Italian sense of drama, I will just die.

My father, having been the only one in his entire family to move away from his birthplace, striking out on a life of his own, was a lapsed Catholic for most of his life.  My mother was a ho-hum Lutheran.  His background is Italian; hers is Finnish.  He was dark and she was blond.  In his family, no one had ever not married an Italian--until then.  In my mother's family, no one had ever not married a Finn--until then.  There was some concern about how my Italian grandmother was going to take the news, but she accepted it as graciously as an Italian mother of a son could do--and eventually grew to love my mom (and later, me and my brothers) dearly.

My mom learned to sing Italian songs, which thrilled my grandfather no end.  This man, Giuseppe, loved music.  I remember at an early age being stunned and frightened by the sight of him, Uncle Victor's cask wine in one hand, a foul Italian cheroot in the other, weeping, sobbing, in a self-inflicted agonizing ecstasy, as he listened to records of Enrico Caruso and Beniamino Gigli .  Music moves me in the same way--even worse, now that I'm older--and I love the fact that I got that trait from that old man who spoke little English, who loved his Italian tenors, and who, in other ways, was as strong as a bull and just as sure of himself.

My father--his son--liked but did not love music.  My mom did.  My mom loved to sing and was actually pretty good at it.  I was, too, as long as I didn't have to sing solo in front of anybody.  Then something besides music came out.  Oddest damned thing.  I could warble like a songbird as long as I was alone or my voice was mixed in with others.  But let me try and sing for you and the sound of a cawing crow would have been music to your ears.   A painful thing to admit, but it's better than not knowing and causing all kinds of grief for everybody.


So. . . for Christmas I always get a book or two from my oldest grandson.  He was hinting for suggestions early on, but since I already owned "Blowing Smoke", and hadn't really made a list, I sort of put off answering him.  He winged it and gave me the new "Autobiography of Mark Twain, Vol. 1".

I have to say, it is the most amazing gift!  First off, it weighs exactly four pounds and looks to be about six inches high.  (When it's not a book, it's a footstool.)  It holds 738 pages and is printed in what looks like a teeny tiny 8 pt. font.  And this is just Volume One!!

But I love Mark Twain AKA Samuel Clemens, and as soon as I devise a carrier for the thing, I'm going to do some serious reading of what I just know is some funny, witty stuff. 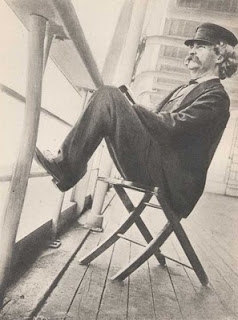 There are photographs of manuscript pages, which are more exciting to me than those teeny tiny printed pages.  This, after all, is Mark Twain's own hand.  On one page I found this:

What a wee little part of a person's life are his acts and words!  His real life is led in his head, and is known to none but himself.  All day long, and every day, the mill of his brain is grinding, and his thoughts, not those other things are his history.  His acts and his words are merely the visible thin crust of his world, with its scattered snow summits and its vacant wastes of water--and they are so trifling a part of his bulk!  A mere skin enveloping it.  The mass of him is hidden--it and its volcanic fires that toss and boil, and never rest, night nor day.  These are his life, and they are not written, and cannot be written.  Every day would make a whole book of eighty-thousand words--three hundred and sixty five books a year.  Biographies are but the clothes and buttons of the man--the biography of the man himself cannot be written.


An odd comment coming from a man who was, in fact, directing his own autobiography at the time.  But I get what he means.  We tend to choose carefully the parts of us we're willing to expose.  But sometimes we just say to hell with it.

So while I was looking at the Mark Twain book, counting the various sections and finding that alone quite amusing, I was eating a frozen Yoplait Gogurt.  My method is to push the frozen yogurt slowly up to the top and them lop it off little by little.  Then when I'm almost done, I press the tube flat from the bottom up, getting the last little bit out of it, like a toothpaste tube.  Normally, the next step would be to toss the flattened tube into the trash and be done with it, but I happened to glance at the package and saw that Spongebob had issued a challenge:  Fill in the missing word from the quote:  "I smell the smelly smell of something that smells __________."

Rancid!  Putrid! Fishy!  No, wait. . . .smelly!  I got it!  Yes, I got it!  Or rather, Spongebob got it and gave it to me.  I had been vaguely trying to think of a one-liner to describe the newly Republican-dominated House and all that goes with it, and there it was:

I smell the smelly smell of something that smells smelly.

It really kind of made my day.  It takes nothing away from either my dad or my mom or my grandfather or even Mark Twain, no matter what you're thinking.  They all would have got a laugh out of it.  (Okay, maybe not Giuseppe.  I'll give you that.)
*
*
Cross-posted at Dagblog and Open Salon
Posted by Ramona Grigg at 11:34:00 PM