Sarge was an idealist, a man of boundless heart, and a hard-headed businessman who from the ground up built a government program—and he was never afraid to call it just that because he disdained anti-government stereotypes—that has become an enduring force for American purpose and compassion, vastly popular at home and around the globe.
George McGovern on Sargent Shriver,  1/19/11


Two years ago today, on the day President Obama was inaugurated, I published the first entry in my blog, Ramona's Voices.  When I woke up that morning I didn't know I was going to launch a blog.  It was only after the events started that I was moved to create one more sounding board where the voices of people I admired might be heard, where their actions could be encouraged and celebrated  (and where the movements of the people who seem bent on destroying the soul of this country could be recorded and exposed).

There was just so much good will floating around that day, mingling with hope and anticipation.  My heart was full.  I saw sunshine ahead; I was sure the dark days were behind us.  It was a day to remember.

Last year, on the first anniversary of the inauguration of both the president and my blog,  I wrote "I'm not ready to write Obama off.  I'm nervous about a lot of what's been coming out of the White House this past year--I admit it.  When I saw Wall Street move in, I chewed my fingers to the nubs.  When Rahm Emmanuel became the head whip-cracker, I felt a distinct shiver up my spine.  And when Barack Obama stopped talking about labor, even as hundreds of thousands of our workers were losing their jobs every month,  I gave up any inclination I might have had to genuflect.
I keep reminding myself that the Good Man took on what amounted to a national nightmare.  There were no easy fixes, and nobody pretended there would be.  But I would have slept better this past year if only I had been able to see the president as a "people person".   Was he ever that?  I don't know.  We might have made him into our own images, taking much needed comfort in an illusion of our own making.  Maybe he is what he is.  But what is he?  After a full year of hosting him in The People's House we're no closer to knowing where he stands, or, more importantly, where he's going.
And yet. . .  And yet.  I trust him"

I knew this anniversary day was coming and that I would want to write about it, but what would I say as I stood beside Obama saying farewell to Year Two, heading into Year Three?  That all of my wishes came true?  That all of my fears were justified?  That nothing much has changed?  That I now know what kind of man my president is?

I can't say any of those things.   I am at times proud of my president, disappointed in him, enraged by his actions or inaction, fearful of the direction he is taking us.

I'm impatient and feeling increasingly impotent as I'm forced to watch more and more jobless citizens give up, more and more home-owners become homeless, more and more of the sick and dying having to give over their lives to insurance company paper-pushers.  I want the wars to end.  I want the corporate giants to finally understand the consequences and do something about their destructive practices.  I want the GOP and certain members of the Democratic Party to fulfill their obligations to the citizenry--the entire citizenry--in a time of unparalleled crisis, and act like a responsible governing body.  I want our president to be a leader of the people.

I want us to be a country of boundless hearts.  I want the people who advocate goodness and mercy to be heard, and not looked on as quaint, anachronistic know-nothings.  There is a place for this kind of talk, just as there is a place for the analyzing and dissection of every political action, left or right.  It all leads to a greater understanding, and possibly real solutions. 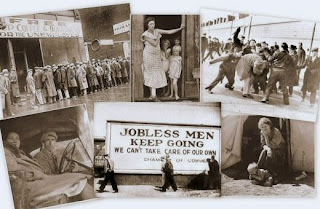 As I'm entering Year Three of Ramona's Voices, this is how I view my blog:  It is what it is until it no longer is.  That's the beauty of this dazzling, dizzying world called the Internet(s)--we all have a chance at putting our voices out there.  Distinct and different, interesting or not--it's an equal opportunity world.  The ultimate exercise in free speech.  What's not to love?
*
*
Posted by Ramona Grigg at 9:40:00 AM