When prosperity preachers hustle, they're making your God a shill

"And through covetousness shall they with feigned words make merchandise of you: whose judgment now of a long time lingereth not, and their damnation slumbereth not."  2 Peter 2:3


Apparently it's nothing new, using God's name to make one's fortune. But with the advent of television and the internet, it's become an art form--a lucrative if predictable art form.  It goes something like this: God spoke to me just this morning and told me he would perform financial miracles for X number of His people if they'll commit X number of dollars to my anointed ministry in X amount of time.

"Quickly, quickly", they say, "Don't even think about it!  Get out your checkbooks, max out your credit cards if you have to. Yes, you heard me right!  God says MAX them out!  Send in your next mortgage payment--have faith that it will all return to you 10-fold, 100-fold.  Do it NOW!  Operators are waiting to take your call."  (Cue the tearing up, the catch in the voice.  Say the word "MIRACLES" emphatically, sharpen the S and hold it.)

These people are bloodsuckers.  They whip up their audiences, promising prosperity just around the corner if they'll make the supreme sacrifice and send in their last dollars.  Have FAITH that God knows what he's doing. (Insert Abraham's willingness to kill his own son if God so ordered it.)  They've latched onto the con to end all cons, perfected over centuries, and still going strong.  It must be startling even to them, how easily they can get rich just by pretending that God speaks to them.  It does indeed work never-ending miracles.  For them.

They get caught in their lies, they're exposed by countless sources presenting overwhelming evidence of their scams, and still they keep a following large enough to enrich their already lavish lifestyles.

"Pastor" Mike Murdock is the leader of the pack.  Other con artist preachers look up to him for guidance.  Tell us, Mike, how do you do it?  What's your secret?  The secret, as I see it, is that he plays on the desperation of his audience and never lets up.  Quickly!  Quickly!  Operators are standing by!  He throws in a few stories not to be believed by any thinking person about the money miracles arriving at doorsteps after those with the sorriest of lives, at the end of their ropes, see their last salvation in sowing the Murdock Seed.   Now and then you see that he can barely hide his disdain for the poor folks who take him at his Word.  At other times, an itty bitty tear starts to fall.  (You can do that if you're conscience-free.) 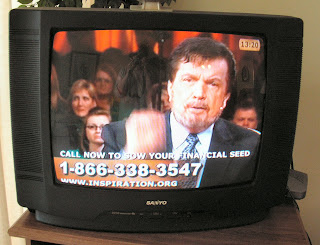 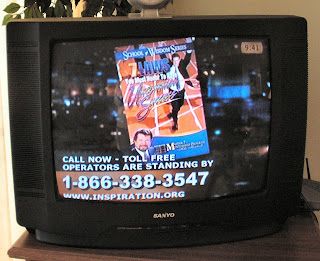 So here I am, just another in a long line of outraged watchers trying to show the evil in these people.  Watch and be warned.  Or not:

An $80 Passover offering will bring seven blessings--and a Mezuzah.

The anointing never ends.  Their followers keep sending money.  What a show!


(There.  Not much accomplished, but I feel better on this Sunday morning.  But I'm warning you:  Don't get so excited by this that you'll want to send me money.  I'll slap you silly.)
Posted by Ramona Grigg at 9:52:00 AM