We have spent the better part of a year locked in a tedious and unenlightening debate over health care while the jobless rate has steadily surged. It’s now at 10.2 percent. Families struggling with job losses, home foreclosures and personal bankruptcies are falling out of the middle class like fruit through the bottom of a rotten basket. The jobless rate for men 16 years old and over is 11.4 percent. For blacks, it’s a back-breaking 15.7 percent.
We need to readjust our focus. We’re worried about Kabul when Detroit has gone down for the count.          Bob Herbert, NYT, 11/10/09

Why are we skirting the issue of joblessness these days?  There will be no recovery without jobs. None.  We need to get cracking on that promised jobs creation program.  But first we need to get past the notion that creating multitudes of low-wage jobs accomplishing nothing more than servicing the upper class is going to get us out of this mess.

We need to re-build and re-tool factories and we need to produce our own goods. Without the majority of the population employed again in meaningful, productive work, we might as well resign ourselves to serfdom and the lives our people led pre-Industrial Revolution.

We need to stop pretending that we need those cheap goods from China and other slave-trade countries. For one thing, they're not all cheap.  Have you looked at the price of athletic shoes lately? With the exception of one company, New Balance, they're all made by human beings working long hours for mere pennies outside of the U.S.  Do the prices reflect that?  Would those ridiculous shoes cost a ridiculous $300 instead of the ridiculous $80 they now cost if they were made here?  Of course not.  I defy anyone to show me how a shoe company in the U.S couldn't produce an $80 pair of running shoes without making a profit.

Almost everything we buy in this country is made somewhere else by people who work under unconscionable conditions for embarrassingly paltry wages.  Do the prices reflect that?  Of course not.  Every year the cost of everything rises, no matter where the goods are produced.  Our new refrigerator was make in Mexico.  I haven't had a new refrigerator in 18 years, but if that was a low, low, non-USA made, non-union made price just for me, I'm not impressed.

Food, clothes, shoes, tools, appliances, office goods, computers--you name it.  They could all be made here by people earning decent wages under conditions that celebrate humanity while still keeping the company in the black.  For most mid- to high-end items, the prices couldn't be much worse.

It can be done.  We all know it can.  It must be done.  There will be no prosperity without a middle class, and there will be no substantial middle class unless we go back to MAKING things. We have to go back to making quality goods better than anyone else at a price that American workers can afford.  That used to be our claim to fame.  American-made goods were the best.  American wages were the best.  When we were the leaders in manufacturing, we lived in an era of exceptional prosperity, and nearly everybody benefited.  The Good Life was here in America.

We can do that again, and we can do it without breaking the bank.  But first things first. The Fat Cats need to go on a diet.   The hard part will be convincing them that their present way of life is killing them--along with the rest of us.  Their King Midas approach to economic stability looks good when they're viewing it from their hog-laden banquet tables, but they need a Marley's Ghost to drop in and show them how they're going to look selling apples on the street corner. 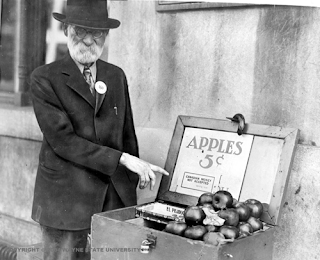 We can't go on like this.   Unemployment has surpassed that magic number--a national average of over 10 percent.  All hell was supposed to break loose if that ever happened, but of course it only affects the unemployed, so watching the stock market go up, even in the face of it, shouldn't surprise us.   But could it at least infuriate us?

Health care is important.  Getting us out of two wars is important.  Climate change is important.  But there is nothing more important today than creating the kinds of jobs that will bring this country back.  Let's get over the idea that such a colossal undertaking can be done without initial governmental/taxpayer help.  We need a WPA-like program and it should have started on Obama's first full day in office.  Congress should have been prepared to sign into law a jobs program that exceeded even our wildest dreams.  Every able-bodied unemployed person should have been ready to flex every muscle when the time came and we should, all of us, have been pushing that enormous, expensive project from day one and working toward making it the most efficient, effective project this country has ever seen.


So let's say we work on getting that done.  Now we need to go after the off-shore "American" companies and give them the bad news.  They're no longer a part of us.  They get what they've wanted, including all the benefits of being a foreign company.  Cheap goods, low wages, tariffs. . .  Enjoy--somewhere else.

So.  If Americans want to build a strong America we have to do it the American way:   Honestly, righteously, willingly working hard.  Together.  For the common good.