Another Requiem for Detroit

Detroit was the arsenal of democracy in World War II and the incubator of the American middle class. It was the city that taught mass production to the rest of the world. It was a place that made cars, trucks and other tangible products, not derivatives. And it was the architect of the quintessentially American idea of putting people to work and paying them a decent wage. It’s frightening to think seriously about what we’ve allowed to happen to this city and what is now happening to the middle class and the American economy as a whole.
Bob Herbert, An American Catastrophe, NYT, 11/21/09

The ghost town known as Detroit is where I spent my life from infancy in 1937 until 1952, when we moved to the suburbs.  Even then, Detroit's northern border was only four miles from our home.  I could take a bus to Royal Oak, transfer to an express bus, and be whisked downtown in no time.  After I married, we still lived no more than a half-hour's drive from the center of the city.  I loved Detroit.  I was not one to stay away.

When I was young and lived in Detroit the Cultural Center was my playground and I never got over the fact that I could walk into those gorgeous buildings--the Detroit Public Library, The Institute of Arts, The Historical Museum--as freely as I could walk down my street.

In later years our writers' group, Detroit Women Writers (now Detroit Working Writers), met at the DPL. After our meetings, I often took the long way back to the parking lot in order to take in the atmosphere of that stately old repository.  In one wing, there is the Burton Historical Collection, where we've spent hours and hours researching local and family histories (for free.  I see they now charge non-residents).  The library is near the campus of Wayne State University and students fill the spaces and keep it busy.

From the library, it is a quick walk straight across Woodward Ave. to the Detroit Institute of Arts, where mummies lie, where a secret, winding staircase takes you down to the cafeteria, where Rembrandts visit and small Picassos reside, and where Fredric Edwin Church's huge wall-length Cotopaxi, when it was in residence,  just blew me away.  But, of course, the main event at the DIA is a visit to Diego Rivera's Industrial Murals. 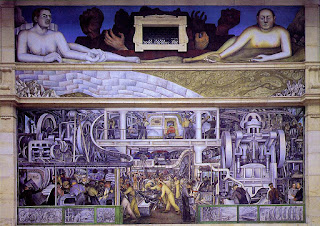 You don't have to wander far to see it.  It is a straight walk from the main entry.  Kids are thrilled by the suits of armor lining the hallway before it, and are usually bored by the murals.  Little do they know how very near the murals came to being smashed to bits and swept away--like much of current-day Detroit.  I  wrote an article about them in 1986, when two of Diego's assistants, Lucienne Bloch and Stephen Dimitroff, came back to the DIA to participate in an anniversary celebration. As many times as I had seen those walls  (glanced at might be a better description), I didn't realize that the story they told was my story, our story.

Detroit was the seat of industry during America's modern years, a city on the move.  The census rolls show that Detroit held the "fourth largest city" spot from 1920 to 1950, when Los Angeles pushed it to fifth place.  The 1950s were peak years for Detroit, with a population averaging 2.8 million.  Fifty years later, as of 2006, Detroit was the only city in the United States to have a population grow beyond 1 million and then fall below 1 million.  Now it rests uneasily at 871,000 (2008 figures).

(It didn't get past me that my family was one of many thousands that moved out of Detroit in 1952.  By that time, my dad, an upholsterer, had moved away from the auto industry and was working for a furniture maker based at Detroit's northern limits. They found an affordable little house in the suburbs, and all I can say is if they hadn't, my kids and grandkids, in their present form, wouldn't be here.  My future husband lived just up the street.)

Bob Herbert took a tour of Detroit's ruins and wrote an important piece about what he saw, but I hope he goes back sometime soon to take a look at the beauty of Detroit.  There is still much to be said for that battered, bloodied but not totally bowed town.

I would have sent him first to take a look at some of the glorious architectural structures built early in the 20th century by industrialists who saw a future there.  Until about two months ago, I might not have believed there was a chance in hell for that city, either, but an important meeting forced me down into the bowels, to the Penobscot building. 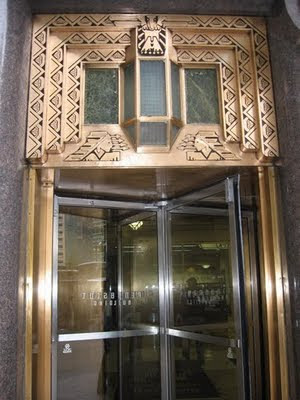 I was as stunned by its beauty as Bob Herbert was by the devastation he saw.  I wandered the halls and felt like I was in a museum again.  Signs of hard times were there--empty store fronts and very few people--but the Art Deco artwork, the gorgeous wood parquetry, the intricately tiled floors, the stately columns were all intact, all preserved, all spit-shined to a dazzling glow.  I hadn't been moved by the sight of a building in a long time, but standing there, I felt as if the dark clouds hanging over Detroit had lifted for just a moment, and the sun was about to shine through.


When I was a kid, my father would take me to the McGregor Library in Highland Park and wait patiently, reading newspapers, while I wandered around that beautiful Beaux Arts building, where I could breathe in the quiet and almost believe I belonged there, where I could gather books in my arms and actually take them home. 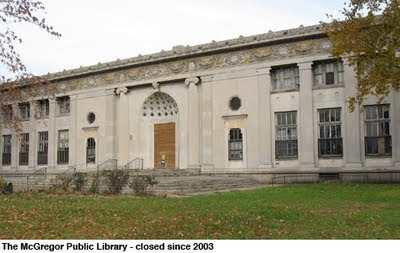 There is talk that the McGregor will reopen soon.  When and if it does, I want to be there.

My Detroit, when I was a kid, was a beautiful lady. Now she is our Grizabella.  To be remembered, to be pitied, but not counted out.  Look closely and you will understand what happiness was.