To Hell with Hunger, Palin's got a book out

The magnitude of the increase in food shortages -- and, in some cases, outright hunger -- identified in the report startled even the nation's leading anti-poverty advocates, who have grown accustomed to longer lines lately at food banks and soup kitchens. The findings also intensify pressure on the White House to fulfill a pledge to stamp out childhood hunger made by President Obama, who called the report "unsettling."
(Amy Goldstein, Washington Post, 11/17/09)

Every morning I get email alerts from the Big Papers about stories they've published that day.  Yesterday I was skimming the list of articles in the Washington Post, and I saw this:  America's Economic Pain Brings Hunger Pangs. 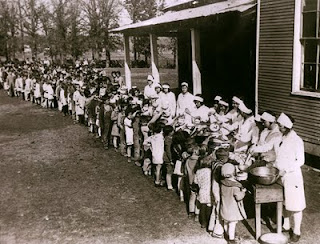 So on more than a whim, I pulled up the WaPo website to see where this story fit on their main page, and--guess what?  It wasn't there.   The two top-read stories yesterday morning were about--guess what?  Sarah Palin's book tour blitz.

This week is National Hunger and Homeless Awareness week--not that anyone would notice.   The unofficial event is coordinated and co-sponsored by the National Coalition for the Homeless and the National Student Campaign Against Hunger and Homelessness.   (In order for it to be official, somebody in the ranks of government would have to recognize hunger and homelessness as a real problem.  Though Obama called the hunger report "unsettling", I don't see any emergency mobilizing going on. It's simply another report among many that causes them to shake their heads and make promises they sincerely believe in, but about which they have no idea how to even begin addressing.)

This is the first paragraph of Goldstein's article:  "The nation's economic crisis has catapulted the number of Americans who lack enough food to the highest level since the government has been keeping track, according to a new federal report, which shows that nearly 50 million people -- including almost one child in four -- struggled last year to get enough to eat."

Fifty million people, including one child in four, didn't have enough to eat last year.  You can cite rampant unemployment, you can blame illegals, you can certainly put the finger on outsourcing and off-shoring, but the report touches on a major factor that nobody wants to talk about:  insufficient wages.


"The report's main author at USDA, Mark Nord, noted that other recent research by the agency has found that most families in which food is scarce contain at least one adult with a full-time job, suggesting that the problem lies at least partly in wages, not entirely an absence of work."


So while we talk about "joblessness" and the impact of hundreds of thousands of jobs lost each and every month, we tend to forget that homelessness and hunger also comes to people struggling to make a living in a job market that is increasingly hostile to them and to their families. There are working people living in their cars, for God's sake.

When millions of able-bodied workers with practical skills and functioning brains are reduced to fighting for menial jobs that pay peanuts, under circumstances that not a one of us could have foreseen even 10 years ago, we have to finally admit that for most of us, life in America is not the recurring pleasant dream but the absolute nightmare.

We can build factories and roads and bridges and schools and libraries and railroad stations and we can fill those places with art by American artists.  We can put our young people to work maintaining and creating parks and waysides and scenic overlooks.  And we can send our best writers and photographers out on the road to chronicle the Second Coming of the Great Depression. This is history in the making, and it is history repeating itself.  These are real people who, many of them, come from families who were in this place before.  Many of them worked hard and created a life swank in the middle class, only to be dropped back into the dark places of their forebears.  I'm guessing they're ready and eager to get to work.

But in the meantime we have to feed people who don't have enough food, we have to house people who are homeless (even as their former homes sit empty), and we have to stop pretending that millions of people without hope for a future is a situation that, given enough time, will right itself.

It's not going to happen without a whole lot of pushing and shoving.  The very thought of a New New Deal sends Corporate America reaching for their buggy-whips.  Back!  Back!  You can have our billions when you pry it from our cold, dead hands!

So.  All Right.  There's a crowbar around here somewhere. . .