Islands of Good in a Sea of Hate

To bring deserving things down by setting undeserving things up is one of its perverted delights; and there is no playing fast and loose with the truth, in any game, without growing the worse for it.
Charles Dickens,  "Little Dorrit"

I stayed away from politics for a few days last week, mostly by choice.  I admit that sometimes it gets me down; the hatefulness, the misdirected energies, the signs of a meaningful recovery growing ever fainter.  I give in sometimes to black moods and it takes a dose of sunshine to get me back on track.  I watched funny movies, played computer games, wandered around my local countryside taking pictures of golden trees and old barns.  It was great.

But yesterday morning--Sunday--the hiatus was over with a bang.  I watched, at my husband's urging, a segment of "The Coral Ridge Hour", a purportedly religious program, where ObamaCare was the sermon of the day.  I came into the program when a video about the dangers of government-run health care was playing.   The lies were so blatant, so transparently Right Wing, and so totally against what I know of Christian beliefs, I sat there either drop-jawed or sputtering.  They lied, and they took pleasure in their lies.  It was Sunday morning and they lied.

They pushed the notions of government-sponsored euthanasia for the elderly  ("Buried deep in the Obamacare bill is a passage that would require all Senior Citizens every five years to get counseling on end-of-life issues.  A less than gentle nudge that at some point the Federal government would like you to die"), wholesale abortions paid for by the Feds, doctors being forced to perform abortions against their moral judgment, rationed life-saving operations, and a guaranteed rapid slide toward socialism if all good Christians don't oppose the Public Option.

They were aided by such notables in compassionate thinking as Star "47 million uninsured Americans is a myth" Parker, a spokesman from James Dobson's "Family Research Council", and somebody billed as "William Lederer, former congressional candidate".

The Coral Ridge Hour is the brainchild of Dr D. James Kennedy, a "minister" in name only.  Dr. Kennedy has been dead for more than two years, but you wouldn't know if from his website or telecasts.  The faithful are carrying on his message of hate and intolerance in a fashion that would make their founder proud.  It was enough to make me sick.

So since I felt back in the game, I thought I would go over to Talking Points Memo Cafe to see what my friends were blogging about.  Once again, I was drop-jawed and sputtering, but in a good way.  I hate to pick out just three excellent bloggers to highlight here, since at any given time there are so many on that site, but these were the three that brought me to my knees.   Their blogs are so passionate, so articulate, so full of goodness.  The perfect antidote to that hateful Sunday morning sermon.

The Genocide of the American Middle Class, by flowerchild
(with links that beg to be read)

Professional Distance, a Discussion of Health Care, by Dickday
(A necessary heartbreaker)

Hearts Gone Astray, by TheraP
(And then read "The Reason Why", including Doxy's heartbreaking "Elegy", a call for fairness in health care if ever there was one.) 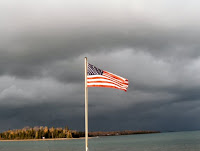 I was so blown away by those four pieces I couldn't even comment.  I was absolutely struck wordless, and it took me until this morning to be able to function again and write the piece I had begun yesterday.

There are good people out there by the thousands fighting the good fight. (Many of them are in my blogrolls)  We need to nurture them, to celebrate them, to emulate them.

So from now on, my Sundays are reserved for them.

(Cross-posted at Talking Points Memo here.)
Posted by Ramona Grigg at 10:52:00 AM