Peace in Our Time Here on Our Shores

[A] just peace includes not only civil and political rights — it must encompass economic security and opportunity. For true peace is not just freedom from fear, but freedom from want.
It is undoubtedly true that development rarely takes root without security; it is also true that security does not exist where human beings do not have access to enough food, or clean water, or the medicine they need to survive. It does not exist where children cannot aspire to a decent education or a job that supports a family. The absence of hope can rot a society from within.


As I listened to Barack Obama speak those words midway through his speech in Oslo this morning, they hit me like a ton of bricks.  I don't know if he planned it, or even realized it, but he was talking as much about the plight of Americans as he was of any other citizens of the world.

We are at war here, and we're losing the battle to save ourselves.  The Barbarians are living among us (though not beside us, since their communities are gated fortresses), using  innocuous, often American-sounding names in order to hide the fact that they are busily working from within to destroy the very fabric of our lives.

They go by many monikers -- plutocrats, Fat Cats, moguls, tycoons, Big Cheeses,  Moneybags, Wheeler-dealers, Head Honchos. . .and those are just the nice terms.  (Some of them used to be called "Captains of Industry" but since that ship has sailed, they don't answer to that anymore.) 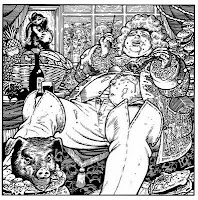 They do their work right out in the open--no fear--because there are enough  partners-in-crime among the high mucky-mucks in our nation's government to keep them safe and happy.  The enemies of the people don't have to resort to bearing arms or setting up artillery.  No strafing from the air, no carpet-bombing, no picking us off from the roof-tops.  After years of pretending that all of their seemingly destructive actions are for our own good, they've got us right where they want us.

You really have to hand it to them--they vanquished us with nothing more than obfuscation and clever lies--that and vaults overflowing with ill-gotten gains.

They used the tactics of every enemy worth its stripe--first  the stroking ("Let us make as much as we can and we'll make sure it trickles down to you."), then the cajoling ("We're a capitalistic country. You understand about free markets, don't you?"), then the intimidating ("The government will turn us all into Socialists.  Communism won't be far behind."), and finally the outright war ("If you don't let us have our way, we will destroy you--we have the Chamber of Commerce and the entire Republican Party on our side.  You have only what we've allowed you to have.  Chew on that for a while.")

So consequently we have the sort of country that Obama decried in his Oslo speech:  Citizens without access to enough food or medicine, reports of dirty water, an educational system ranking lower than some third world countries, capable men and women rooting around for jobs that will keep their families intact.

As Obama said this morning, "An absence of hope can rot a society from within". He was the champion of hope and we bought it to such a delirious degree, we lifted him into the White House and took to the streets wildly cheering our good fortune.

Our hope, if not absent now, is at least preoccupied.  We need it back if we're ever going to take care of our own business again.  We need the man who accepted the Nobel Peace Prize today to come home and lead us out of this.  We'll fight as hard as we can, but we can't do it without a leader.  He is it, and it's time he took a good, long look at the one country whose problems he can actually do something about.