Is Dystopia All There Is?

I’ve been dreaming about lost children. In one, I’m in a tall building looking down at a lone child on a beach, a child around six or seven walking slowly along the water’s edge, up and down, up and down, looking over at our building, possibly looking at me, or looking for me. It’s getting dark and I’m worried. I run to the door, and suddenly I’m on the sand, but the child is gone. Nowhere to be seen. I wake up.


In another there’s a child scurrying among garbage cans in an alley. In this one, it’s a little girl, no more than three. I’m at the entrance of the alley. Lights are shining behind me but it’s dark in the alley except for a single light above a door illuminating the spot where I see her. She disappears and reappears, disappears and reappears, but she doesn’t seem to see me. I call out but she doesn’t turn her head. I’m moving slowly toward her, willing my feet to move faster. She’s looking for something, throwing trash aside, until finally she stops, sits on the ground, lowers her head into her arms and wails. I rush toward her. And I wake up


During my waking hours I worry, too. I worry about the lost children everywhere, but now I'm an American living in a country that forcibly takes children away from their parents.

Did you read the piece I wrote in June, 2018 called “The Children are Lost and Someone Must Pay”? No, I’m sure you didn’t. I cried as I wrote it. I cried because the story horrified me, but I cried, too, because I knew no matter what I said, no matter how terrible it was, life for most Americans would go on while life for those refugee families would be intolerable.

No other way to put this: our government has been kidnapping refugee children and hiding them all across the country.

They move them in the dead of night and won’t say where they’ve gone.

They refuse to open detention center doors to concerned government officials — the ones who haven’t gone over to the dark side and show no signs of budging.

They won’t allow outside cameras or recording devices, releasing instead their own sanitized versions of nice places to incarcerate terrified children.

They hang “Dear Leader” posters on the walls, showing a smirking Donald Trump alongside a bizarre, irrelevant quote from his book, “The Art of the Deal”. (“Sometimes by losing a battle you find a new way to win the war”, in both English and Spanish.) 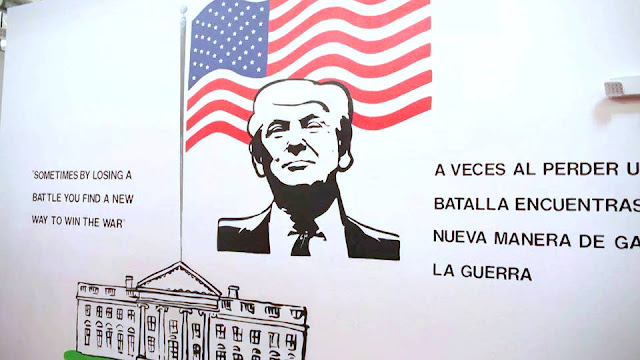 
It’s as if the plan to forcibly remove children from their refugee parents ended at “forcibly remove”, followed by TO BE DETERMINED...

It’s as if they thought nothing bad would happen if they forcibly removed small, helpless human beings from the people who love them and care for them.

It’s as if they thought…

You know where I’m going with this, right?

They didn’t keep accurate records. They know where some of the children are, but not all of them. They sent them off to dozens of locations across the country without a fool-proof paper trail or electronic trail or any other kind of trail, and now that the cockamamie plan to steal kids away from their parents has been whomped to bits by millions of furious, vocal Americans, along with hundreds of members of the press, the clergy, and by God, Congress — all clamoring to know where the kids are — they’ve been forced to admit they just don’t know.

Nothing has changed. The children are still missing. For each child they reunite — to much fanfare — dozens more have disappeared. They’re gone.

The children they’re still holding are crying out, begging to be heard. We know hundreds if not thousands of them are being abused. We know this for a fact, but most Americans refuse to believe it.

We know their parents will never stop looking for them, and if that doesn’t break hearts, nothing ever will.


We’re at a point, as a country, where we either choose democracy and the rule of law or we give in to fascistic authoritarianism. We still have a choice. But we have to ask ourselves hard questions:

What if nobody goes to jail for kidnapping refugee children?

What if we never find those missing children?

What if we can’t bring drug prices and health costs down?

What if we never come up with the money to help Puerto Rico?

What if Flint never has clean water?

What if bigger and bigger guns kill more and more Americans?

What if abortions become illegal and contraceptives become contraband?

What if “The Handmaid’s Tale” becomes a handbook for certain powerful men?

What if the LGBT community never achieves equality?

What if people of color are in even more danger?

What if those promoting a corrupted version of Christianity get to make our nation’s moral rules?

What if Fox News and Sinclair Broadcasting join together and become state TV?

What if public education disappears and an unregulated, agenda-driven charter school system becomes our only route to learning?

What if Right Wing judges with terms for life keep taking away our freedoms?

What if certain corrupt leaders dissolve our government and form their own?

What if the Russians win?

What if, when we all wake up and pay attention, it’s too late?

I’m a casual student of history but I’ve studied it enough to understand what happens to human beings under authoritarian, fascistic regimes. I understand that the transition from a democratic society to a dictatorship comes, not because of weakness or ignorance, but because it’s far easier to be oblivious and complacent.

The power-mongers take advantage of our insistence that it can’t happen here. They seduce us with personalities and entertainment, with audacity, with promises to take away the regulatory power of government and let us live our own lives.

And when we believe their promises and give them power, when they do the things they said they wouldn’t do — the things every expert in political history warned us they would do — we can’t bring ourselves to believe we were hoodwinked.

Too many of us still don’t believe it’s happening. But ask anyone who comes from an authoritarian society and they’ll tell you this is how it happens. It happens slowly, with disbelief at first that a demagogue is on the rise, then it changes to belief that the entire legitimate government is against us and one person has the power to save us.

The demagogue takes over the airwaves, denounces the press, demands allegiance, expects subservience, insists that self-serving lies are the truth, and rises to power, even in places where attributes like intelligence and decency are celebrated.

No demagogue, no dictator has ever done it alone. He has accomplices in high places who have their own agendas, who see riding on the coattails of someone with that much power as a journey they’re willing to take in order to feel even a touch of that kind of exaltation.

And always, in every instance, there is money to be made.

The demagogue is admired for getting there, for battling the forces trying to vanquish him, for winning. It makes him a hero, even when those forces against him are forces for good.

And once the demagogue becomes dictator he makes the rules. He throws out constitutions. He packs the courts with his own accomplices. He holds mock elections where only he can win.

And always, in every instance, the masses suffer.

But the dictator reigns for life, or until a coup takes him down. And democracy becomes that quaint thing, that grandiose experiment that never could have worked forever.

That’s how it happens in other places.

How long before it happens here?
Posted by Ramona Grigg at 9:03:00 AM