There is a real Unicorn Hunters Society in the United States, in case you hadn’t heard.  It was formed in 1971, even though, as you know, unicorns have been around forever.  The society is based at Lake Superior State University (hereafter known as LSSU) in Sault Ste. Marie, Michigan (pronounced “soo saint Marie, hereafter known as The Soo).

The Soo is at the northern terminus of I-75, just beyond the 46th parallel, an hour north of where I live most of the year.   Up in the north woods hunting is a traditional activity, but until unicorn hunting was established only certain of us believed they existed.  The Unicorn Hunters Society, knowing what chaos would ensue once word got out about the mythical creatures’ activities, wisely set up a list of regulations.
From their Unicorn Quest list:
(See complete list of regulations here.  Download a Unicorn Quest license here.)

The society was founded by W.T (Bill) Rabe,  a Public Relations mischief-maker from Detroit who later became the resourceful PR Director at LSSU.  He was looking for something unique that would put the obscure little university on the map, and, for reasons obscure, he came up with The Quest for Unicorns.

It got some attention.  Who could resist? But for Rabe it apparently wasn’t enough. At a New Year’s Eve party a few years later, in 1975, he and some of the other Unicorn Hunters got together and began writing down the words or phrases they most hated that year. (Must have been some boring party is all I can say.)  They saw right then and there that unicorn hunters made the most perfect wordsmiths, and the idea for the First Annual Unicorn Hunters List of Words Banished from the Queen’s English for Mis-Use, Over-Use and General Uselessness was born. (Hereafter known as the Banished Words List.  Or List.  Or list.)

Bill Rabe, old PR expert that he was, chose New Year’s Day, 1976, for the list’s debut date.  He knew from experience that January 1 is traditionally a slow news day, and the media, always hungry for tidbits on that day, would snap up the whimsical back story about the unicorn hunters and help to promote the Banished Words List.

Some of the words from that first list:  At this point in time, detente, macho, scenario.  (See 1976 list here.  See archive of all the words here.)  Now the voting is open to everyone and the words or phrases that show up most often will get to the top of the list.

This year  they added BAE (a new word for me until my niece explained it), polar vortex, skill set, cra-cra, and my own favorite candidate, enhanced interrogation.

Well, certain people took umbrage (whoa–a candidate right there) with the Unicorn Hunters.  They didn’t see this as just so much fun; they saw it as a bunch of stuffy university types forcing people to stop using words or phrases of their choosing.   One commenter wrote, “Nobody is going to tell me what words I can use.  Not gonna happen. Bite me.”  (Oy.) 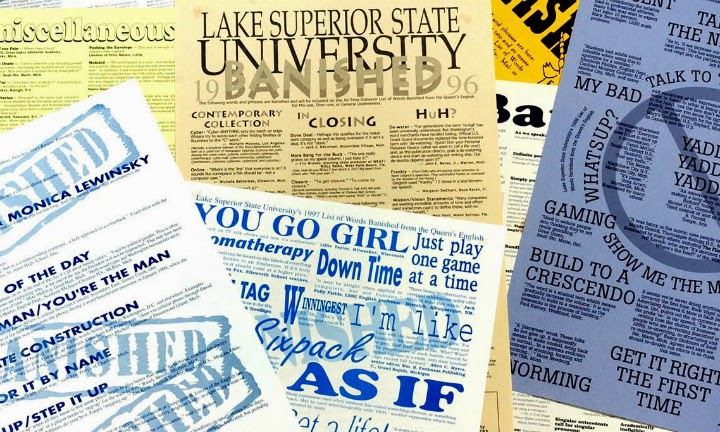 I’ve perused (all right, read) the whole damn list from A to Z and I’m pretty sure I’ve used at least a third of those words and phrases.  (Except “bromance” and “chillaxing”. Typing them here for the first and last time.)

I literally (Literally! Ha!  Not on the list!) love lazy phrases and cliches, but only when I’m using them.  I hate it when other people take the easy way out and use them, too.  Amateurs!

I’ve followed the Unicorn Hunters for years and I love these lists, but at the end of the day (1999), they’re just words, right?  So far it’s not a crime to use them, right?  So will I try to mend my ways?