CPAC! A Fond Look Back on the Circuses That Were 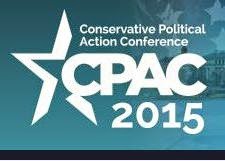 It's CPAC time!  I almost missed it!  (My invitation no doubt was lost in the mail.)  Since 2009, shortly after I first started writing this blog, I've been fascinated by the dizzy doings over at CPAC (Conservative Political Action Conference).  I admit that before I took to writing a political blog, I didn't know much about what turns out to be a venerable old conference designed to highlight the Conservative (and now Tea Party) leanings of the Republican Party.  It's the coming-out party for potential presidential candidates and has been on the scene for over 40 years.  (Honestly? Since 1973? And I thought I was paying attention.)

The main speakers this year are about the same as the main speakers from several years past:  Sarah Palin, Newt Gingrich, Donald Trump, Sean Hannity, Carly Fiorina, Rick Perry, Marco Rubio,  Rick Santorum, --oh, and Jeb Bush. This year they've added Phil Robertson of "Duck Dynasty" fame, but once again it looks like a snub for Rush Limbaugh. (Heh)
There was a long list of programs, but this one gave me the giggles:  Good Guys Reception, sponsored by the National Rifle Association and Freedom Alliance.  By invitation only.
(There are numerous spots where you can pick up a live feed, so as not to miss anything crucial.  C-Span is as good a place as any.)

So since this is a big weekend for the Republicans, I thought I would take a look back on the blogging I've done about CPAC since 2009.

2010:  Square Deal, New Deal, Fair Deal, Raw Deal . Alas, but a mere mention.  I don't know what was going on that year but CPAC obviously wasn't a priority.

2011: Friday Follies:  Mother Jones, Feral Pigs, Palin, Bachmann, Simpson and Da Yoopers. An even tinier mention, having to do with Michelle Bachmann, but the rest of the blog is pretty good.

2012:  Thank You, Cal Thomas. Mighty Big of You.  I wrote back then that Cal Thomas could probably kick himself for getting involved with that bunch.  Silly me.  He's on the roster again this year.

2013:  CPAC 2013. Wingers Just Want to Have Fun.  But not too much fun.  The dress code--an entire poster full of dress code--says no-no to the nightclub look and to Walmart wear.  Conference-goers are required to look like they mean business, even if there's funny business going on.
But they did allow zombie costumes at "The Walking Dead, Obama Zombies on Parade" bash.  So that's cool.

2014:  Hail, CPAC! Silly Season is Upon us. Can Spring be Far Behind? Wherein Ted Cruz puts on his McCarthy face and Christine (I am not a witch) O'Donnell does a book signing along with Callista Gingrich, one of Newt's wives.  Good times.

So that's it, then.  I'll probably be following along on Twitter and Facebook when I think of it, looking for the fun stuff.  I just hope there is some fun stuff.  I don't know.  The Republicans have been letting me down in the fun department lately.  Ever since they took over the entire federal government, except for that one place where that foreign squatter with the funny name lives.

I hate it when they do things that don't make me laugh.


(Cross-posted at Dagblog, Freak Out Nation, and Liberaland.  Featured on MBRU at Crooks and Liars)
Posted by Ramona Grigg at 4:20:00 PM