Not "The Onion": GOP Senators Tell Iran Obama's Not The Boss, They Are

In a stunning open letter to the leaders of Iran, 47 Republican senators let it be known that, while Barack Obama might occupy the White House and temporarily hold the title of President and Commander-in-chief of these United States, it is Congress--most especially the Republican Congress--that holds the cards when it comes to any kind of nuclear deal.

The letter--did I mention it was addressed to the leaders of Iran?--was written by Tom Cotton, freshman senator from Arkansas, and signed by all but seven Republicans in the United States Senate.


An Open Letter to the Leaders of the Islamic Republic of Iran:

It has come to our attention while observing your nuclear negotiations with our government that you may not fully understand our constitutional system.  Thus, we are writing to bring to your attention two features of our Constitution — the power to make binding international agreements and the different character of federal offices — which you should seriously consider as negotiations progress.


Does that paragraph seem a little strange to you?  Who, outside of Monty Python, or maybe your local HOA, writes, "It has come to our attention. . ."?

Who, besides a newbie Tea Party senator (or a hotshot American Constitution 101 student) thinks it's a good idea to publicly school the leaders of another country about the laws of the United States?

Who, for that matter, writes an open letter to leaders of a country with which we're negotiating nuclear agreements, telling them they shouldn't be negotiating anything with this particular president when it's this particular congress that will ultimately have to approve?

From the letter:  "For example, the president may serve only two 4-year terms, whereas senators may serve an unlimited number of 6-year terms.  As applied today, for instance, President Obama will leave office in January 2017, while most of us will remain in office well beyond then — perhaps decades.
"What these two constitutional provisions mean is that we will consider any agreement regarding your nuclear-weapons program that is not approved by the Congress as nothing more than an executive agreement between President Obama and Ayatollah Khamenei.  The next president could revoke such an executive agreement with the stroke of a pen and future Congresses could modify the terms of the agreement at any time."

Who writes this without knowing that congress only approves and does not ratify a treaty?


"First, under our Constitution, while the president negotiates international agreements, Congress plays the significant role of ratifying them.  In the case of a treaty, the Senate must ratify it by a two-thirds vote.  A so-called congressional-executive agreement requires a majority vote in both the House and the Senate (which, because of procedural rules, effectively means a three-fifths vote in the Senate).  Anything not approved by Congress is a mere executive agreement."

Who does that without knowing that it's not just our country in negotiations with Iran, but a UN coalition made up of five other countries--the UK, Russia, China, France and Germany?

Iran's foreign minister, Javad Zarif, did his own schooling yesterday:


"I should bring one important point to the attention of the authors and that is, the world is not the United States, and the conduct of inter-state relations is governed by international law, and not by US domestic law.

The authors may not fully understand that in international law, governments represent the entirety of their respective states, are responsible for the conduct of foreign affairs, are required to fulfill the obligations they undertake with other states and may not invoke their internal law as justification for failure to perform their international obligations.

I wish to enlighten the authors that if the next administration revokes any agreement 'with the stroke of a pen', as they boast, it will have simply committed a blatant violation of international law."


So how did Tom Cotton get 46 other senators, many of them senior senators and wannabe presidential candidates, to sign their names at the bottom of that misdirected, miscalculated, misinformed mess?

I can hardly wait to hear from the signers--the ones who woke up this morning, as if from a hangover, thinking, "What in hell? Where am I?  What did I do?"


And, man, oh, man, (Got that from Biden) didn't the shit hit the fan?  It did.  In great steaming gobs.  So many are responding at so many different sources, it's impossible, even at this early stage, to link to them all.

Bernie Sanders accused the signers of sabotage.  And Joe Biden said this:


“In thirty-six years in the United States Senate, I cannot recall another instance in which Senators wrote directly to advise another country--much less a longtime foreign adversary–that the president does not have the constitutional authority to reach a meaningful understanding with them,” Biden wrote. “This letter sends a highly misleading signal to friend and foe alike that that our Commander-in-Chief cannot deliver on America’s commitments-a message that is as false as it is dangerous.”


To which Tom Cotton, the author of the now infamous letter, who, at this writing, has no foreign policy or national security experience whatsoever, responded:


“Joe Biden, as [President] Barack Obama’s own secretary of defense has said, has been wrong about nearly every foreign policy and national security decision in the last 40 years,” Cotton said Tuesday on MSNBC’s “Morning Joe,” in a reference to former Pentagon chief Robert Gates, who ripped Biden in a tell-all memoir after leaving office.

And on it goes.  There is no end to the disrespect and outright hatred for this president.  The caterwauling against him raises by a thousand decibels each year he is in office.  The haters, including those members of congress who have made it their mission to take him down by any means necessary, aren't finished yet.  If this doesn't work--and it won't--they'll move on to something else.
It's worth noting that this all came down on the same weekend the country was recognizing the sacrifices made by the Civil Rights marchers at the Edmund Pettus Bridge 50 years ago in Selma, Alabama.  On Saturday, the same day the Open Letter to the Islamic Leaders of Iran became public, our president, Barack Obama, gave the speech of his life at the entrance of the "Bloody Sunday" bridge. 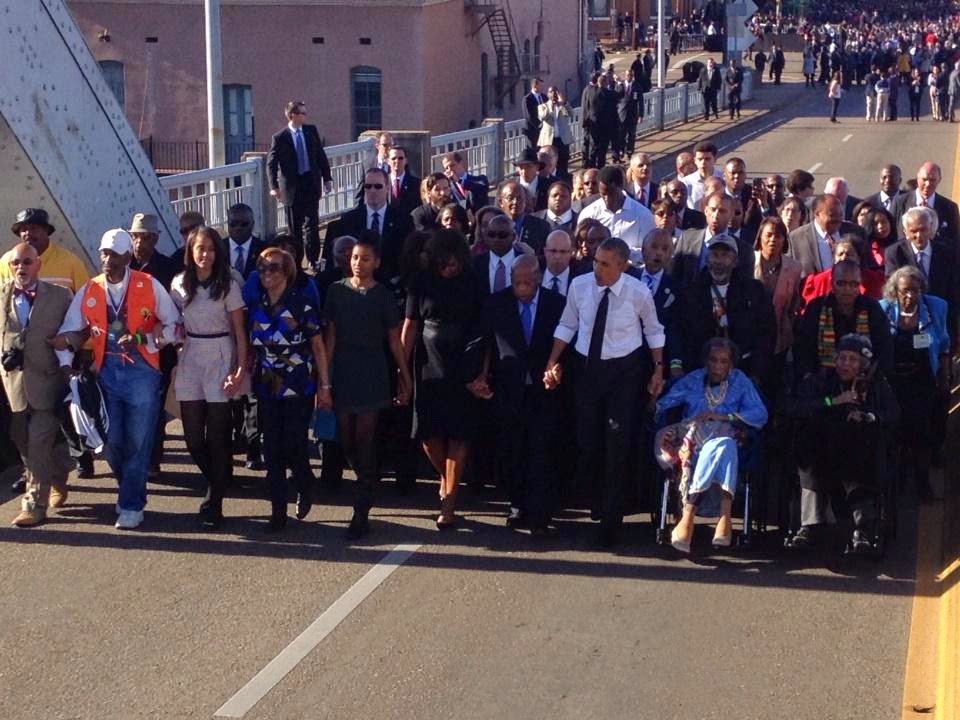 In his speech President Obama said,

"The Americans who crossed this bridge were not physically imposing. But they gave courage to millions. They held no elected office. But they led a nation. They marched as Americans who had endured hundreds of years of brutal violence, and countless daily indignities – but they didn’t seek special treatment, just the equal treatment promised to them almost a century before.

What they did here will reverberate through the ages. Not because the change they won was preordained; not because their victory was complete; but because they proved that nonviolent change is possible; that love and hope can conquer hate."

And this is why the haters, even those members of congress who will never give this president the legitimacy he deserves, will lose.  We've made too many sacrifices in too many places at too many times to give in and give up and let them win.

(Cross-posted at Dagblog and Alan Colmes' Liberaland)
Posted by Ramona Grigg at 5:21:00 PM