Ugly Politics: When the Meme is "The President Must Die" We Have To Pay Attention

At a Town Hall meeting held last week in Oklahoma, an audience member raised her hand and said to Jim Bridenstine, a congressman from the First District,  “Obama is not president as far as I’m concerned. He should be executed as an enemy combatant.”

Read that again:  "Obama is not president as far as I'm concerned.  He should be executed as an enemy combatant."  (Video here.)

She then went on to remind Bridenstine and the audience about the Muslims Obama is letting into this country to be pilots on commercial jets, which was proof to her that "this guy is a criminal!"  She blamed congress for doing nothing when Obama "has no authority.  He has NO authority!"

And when she was finished and the camera turned back to him, the first words out of U.S. Congressman Jim Bridenstine's mouth were, "Look, everybody knows the lawlessness of this president."

He went on to describe a Chief Executive so out of control, so power-hungry, that when he couldn't get something done through executive order, "then he used foreign bodies".

He used as an example an effort in April, 2013 to ban certain types of guns, "not because they operated any differently than any other types of guns but because they looked scary". Then he tried to block magazine sizes, which, again Congress blocked.  "Which was the right answer," according to Jim.

Well, of course, this president signed it.  So here's how Jim sees it:

"Now let me be clear.  The Second Amendment of the United States of America is not open for debate by a foreign government."

A woman in his audience has just called for the President of the United States to be executed and this congressman answers her by bringing up the president's push for background checks, gun registration, and his dealings with foreign countries to accomplish the same.

Nobody seems to know where this meeting took place or exactly when, but someone put it on YouTube and it went viral. The press picked it up.  Bridenstine got wind of the flak and put this notice on his web page:


“A public figure cannot control what people say in open meetings. I obviously did not condone and I do not approve of grossly inappropriate language. It is outrageous that irresponsible parties would attribute another person’s reckless remarks to me."


So let's talk about who is being irresponsible.  You kept quiet when an audience member called for the death of the president, and then you added fuel to the fire. You brought up guns and the Second Amendment and insinuated that the President of the United States is in league with foreign players to take American gun rights away.

I hope the Secret Service pays that group a call and I hope you're there when they do.  You all need a lesson in Government, in Civics, in Constitutional and Sedition Laws, and in civility.

I confess that I've never been as fearful of a president's safety as I have with Barack Obama.  The gun nuts are getting bolder and the propaganda against his "otherness" is unrelenting and growing more fierce.

There is no proof that this president has been threatened more than any other.  (I went looking.)  The Secret Service won't provide those statistics, of course, and Politifact finds no evidence and calls the charges that he has been "false".   But a simple search finds threats against this president by the thousands.  Including this one on Facebook from the Christian American Patriots  Militia (Read more here.): 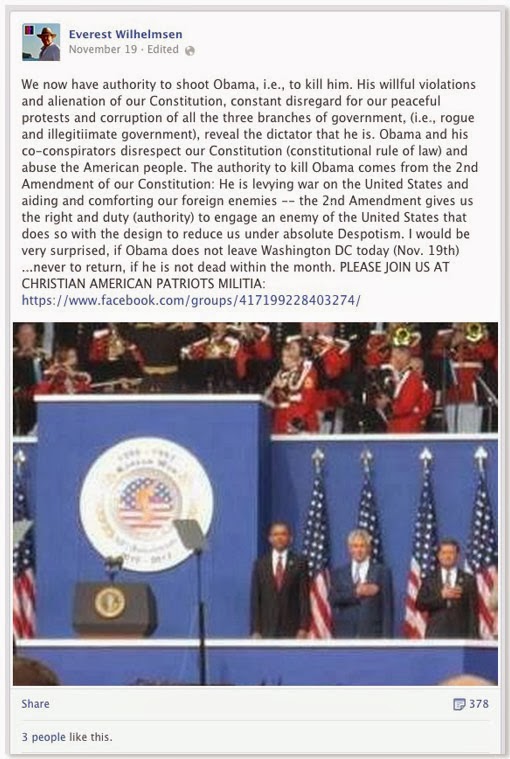 The rumor is that Ted Nugent got a visit from the Secret Service for saying, "If Barack Obama becomes the president in November, again, I will be either be dead or in jail by this time next year."  I hope it's not just a rumor.  We'll never know unless Teddy tells us, but I hope they're doing their jobs.  That was a direct threat. (Not that it would cure him.  I wrote about his shenanigans just last month.  He gets off on this stuff.  Apparently so do a lot of other people.)

Are threats against the president illegal?  It depends.  There is this:

18 U.S. Code § 871 - Threats against President and successors to the Presidency

On Tuesday, the Ninth Circuit Court of Appeals ruled that comments which encouraged the assassination of President Obama and predicted that he would have “a .50 cal in the head soon” while using racial slurs against him were protected by the First Amendment. While the decision seems to be a plausible reading of existing precedents, a former Secret Service agent contacted by FrumForum thought that it exposed the president to unacceptable risk.

“It was a bad decision,” said Joseph Petro, former agent and co-author of Standing Next to History: An Agent’s Life Inside the Secret Service. He argued that permitting such remarks “creates more potential for someone to do something” dangerous. Petro claimed that, in his experience, it is normal to treat such comments as threats, saying “I’ve seen this before … Back in the Nixon days, there was a guy who put up a billboard in New Jersey saying ‘Kill Nixon.’ He was arrested and the billboard was taken down.”
“We’re all in favor of constitutional rights,” he added, but “there should be some … sensitivity shown for the unique risk that the President faces.”

The former agent suggested that the ruling was part of a pattern of recent events that did not show a proper awareness of the dangers presidents face comparing it to incidents in the past two years in which protesters brought weapons to presidential speeches. Petro also noted that the fact that the accused, Walter Bagdasarian, predicted that Obama would be shot with a .50 caliber rifle while he owned such a gun made the threatening nature of the comments especially clear.

However, two legal experts contacted by FrumForum both agreed with the majority’s central claim that Bagdasarian did not express an intention to personally kill Obama because he merely predicted the president’s killing and encouraged others to shoot him. “The speaker did not tell Obama that if he didn’t do something he would shoot him,” said Geoffrey Stone, a law professor at the University of Chicago who has written extensively on First Amendment issues. “The speech may have been repugnant and ugly … but it did not constitute a threat within the meaning of the First Amendment.”


I'm afraid.  I'm very afraid.  When advocating and encouraging the killing of our president is protected under the First Amendment, it's destined to become as twisted as the Second Amendment to mean whatever the advocates want it to mean.  It'll be open season on wishing the president dead.

(Can I just say to those who are already revving up their keyboards to remind me that George W. Bush got death threats, too?  I don't doubt it.  Every president has.  It goes with the territory.  But this was a town hall meeting where a member of congress did nothing to disabuse an audience member of the notion that the President of the United States should be executed as an enemy combatant. Instead, he immediately launched into an attack on "the lawlessness of the president" and his shady attempts to bring in foreign countries to control our guns, showing him to be a dangerous character, indeed.   Let me know when you find something comparable.)