The Problem with Unions? They're not Corporations

WARNING: It's Labor Day and I'm feeling the love for labor, so what follows will be totally biased and in no way fair or balanced.  (If you've been wondering what fair and balanced really means, go ask your two-year-old.  It'll make as much sense as any other definition you've ever heard, but it'll sound so much better coming from the mouths of babes.)

It turns everything we thought about our government, our constitution, and our rights as citizens upside down.  It's as if that one edict from the highest court in the land didn't just water down the rights of actual human individuals, it gave permission to get really creative with applications of that wacky whopper.

If the most important court in the land could have the last word on the cockamamie notion that corporations could be seen as people, rumor has it that the Republicans, through their surrogates the Koch Brothers, the U.S Chamber of Commerce, FreedomWorks, the Tea Party, and--why not?--the Religious Right, are thinking, Okay! Let's turn that around and push the equally nutty notion that unions aren't people. See how that plays.

And as we've seen, it plays the way it has always played.  There is a move out there to blame unions for everything Big Business did to the workers in this country. Depressions are notorious for throwing huge segments of a country's population out of work (so too, outsourcing) but somehow, in this depression, the unions--those organizations in business to represent workers--are blamed for everything from mass unemployment to higher health costs to gas rising over $4 a gallon.  They've painted union members as an uppity class with the nerve to think $8.50 an hour is demeaning.  They ought to be happy they even have jobs....

It's the 1800s to the 1980s all over again. (In 1835, mill kids from 8 to 18 in Paterson, NJ  went on strike for a shortening of their work day from 13 hours to 11, six days a week. They made anywhere from 45 cents to $2 a week, depending on their ages. (They ended up getting 11 1/2 hours, with a cut in pay.)  The papers of the day blamed everyone but the factory owners, from the greedy parents of the little workers, to outside agitators looking for trouble, to the kids themselves, who were "well taken care of and happy" and had nothing to complain about.  Sound familiar?)


For every successful strike (See Bread and Roses), there were hundreds that sucked the blood out of the workers, their families and their communities, with nothing gained in the end.  We've been there, we've done that; the struggle for recognition was necessary, it was painful, it was over.  And now it's back.

(See US labor history timeline here.  It's not complete (they missed the 1913 Upper Peninsula copper mine strike, for example) but if you can skim it and still manage to miss how unions have changed the lives of workers for the better, there's probably a re-run of "Keeping Up with the Kardashians" somewhere on TV.  Go for it.)

The most effective way to vanquish an enemy is to render them less than human.  If the powermongers can convince the armies of the night that the people they're destroying are at the bottom of the humanity pit they're on their way to winning the battle.

It used to be the factory rats who got the brunt of it (they, the lazy drunken union-protected potheads), but since our factories have virtually disappeared, the union-busters had to go elsewhere.  No surprise, they went to the last bastion of organized labor, the public service sector.  (An effort already started in 1981, when Ronald Reagan fired nearly 13,000 air traffic controllers belonging to the union known as Patco for striking illegally.)

What's unprecedented today is the realization that an entire political party has joined the battle against unions.

What's baffling is the wrath against teachers and the neglect of the needs of cops and firefighters.

What's frightening is the near-death of collective bargaining, the only working class safety net.

What's needed again is the passion of our predecessors for enforcing the wants, needs and rights of the laborers in this country  Without that passion the power-mongers win.  We've fought too hard and given up too much to watch the gains we've made just dry up and blow away, disappearing into the air as if they never happened.

If corporations are people, the workers are not the parasites, but the heart, sinew and bones. If our government is the people, ditto: Heart, sinew, bones.  Never let them forget that.

Had to share this. I'll bet there's not a Republican today who'll own this.  Talk about shameful! 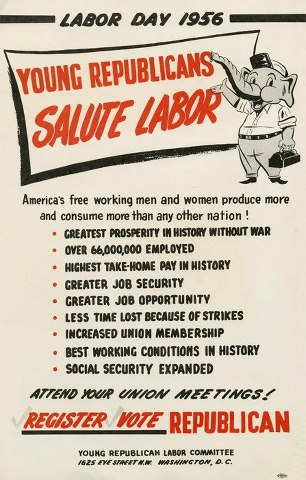