Keeping Down with the Joneses was Never Going to Work Anyway

Months before the Republican and Democratic Conventions in the summer of 2012, when politicians fell all over each other trying to out-Poor-Me-Before-the-Bootstrap-Thing, Mitt Romney, Republican presidential candidate, had already had enough of pretending he was one of the little people.  (Did you notice it was Ann Romney and not Mitt who told the tale about having to live in a ceement basement when they were in college, poor as church-mice except for those stocks they could cash in whenever they ran out of Ramen Noodles?)

In the merry month of May, Mitt went for the gold at a $50,000-a-plate dinner, raising a haughty middle finger to the riff-raff, the losers, the leeches--the only Americans so useless they would actually vote for  Barack Obama.

He laid it all out there, and--you have to give it to him--he seemed pretty comfortable up there.  He hardly stuttered at all :


There are 47 percent of the people who will vote for the president no matter what. All right, there are 47 percent who are with him, who are dependent upon government, who believe that they are victims, who believe the government has a responsibility to care for them, who believe that they are entitled to health care, to food, to housing, to you-name-it. That that's an entitlement. And the government should give it to them. And they will vote for this president no matter what…These are people who pay no income tax.

Ouch!  You talking 'bout me? (Water off my back, pal, water off my back.)  But did you see how the Republicans took it?  Man, you would think they didn't actually believe any of it themselves.  The thing is, you never, ever say such things out loud! (Rove Playbook, page 3, paragraph 1, or thereabouts)

You almost have to feel sorry for Mitt.  He was born rich and got even richer, which should be the American Dream, shouldn't it?  So why is everybody making fun of his richness?  Haven't we had rich presidents before?

Well, yes we have.  Almost every president came from backgrounds most of us couldn't even begin to hope for.  At least two of them, Franklin Delano Roosevelt and John Fitzgerald Kennedy, were so whopping wealthy it was almost other-worldly.  The thing is (Mitt, I'm talking to you), it didn't matter.  Once they became public servants (Yes, Mitt, I said public servants) they took their obligations seriously.

FDR and JFK didn't exploit their wealth; neither did they hide it.  They came from families whose wealth was unimaginable to the rest of us, but it didn't matter because they were both presidents who didn't talk down to the middle-class and the poor, who didn't propose cutting social programs in times of need, who didn't cater to the rich simply because the rich expected it from them. 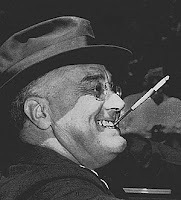 Picture this:  FDR with a pince nez and a mile-long cigarette holder--not often seen in most neighborhoods. His speech patterns were decidedly (and sometimes hilariously) patrician.  He was elected in 1932, at the height of the Great Depression, by voters who often didn't know where their next meal was coming from.  It should have been a squeaker of an election, considering how he must have looked to the masses, but he won in a landslide.  It wasn't how he spoke but what he said.  He built up their hopes without ever talking down to them.  They trusted him.  He understood that the depression they were suffering through wasn't their fault, and when he talked about "victims", it wasn't to blame them but to assure them that he was there to do something about it.

The Kennedys played football on lawns the size of small states at the family compound.  They sailed the blue waters off Hyannis Port in yachts fit for potentates. Jackie wore gorgeous clothes designed by Adrian and was often seen at Paris runways rooting for high fashion couturiers.  And American manufacturing output was the envy of the world, the majority of the country counted themselves as middle class, health costs were reasonable, and children were being educated without fear of failure or budget cuts.  We woke up to the need for civil rights, we established the Peace Corps, and we took giant steps toward space travel.

FDR and JFK didn't exactly become one of us, and they didn't even try, but we all knew they were our champions. That's the difference.

Mitt?  You listening?  That's the difference.