I'm writing this from North Carolina this morning, getting ready to be on the road in about an hour, heading for our Snow Bird digs in South Carolina.  So before I get into this, let me be clear -- there are a lot of very nice people in the Carolinas.  A lot of them -- smart ones, too.  But the ratio of normal to nuts seems to be narrower in these parts and after many years of making this journey I tend to prepare myself early for the looniness ahead.   (Remember the Jesus "There's Hell to Pay" billboard?  That was near Myrtle Beach.  There's a companion billboard somewhere in my picture files.  I'll dig it out one of these days.)

So I turned on my laptop this morning and it was as if some grand instructor in the art of insane hilarity (or hilarious insanity) was saying "Ha!  Top this if you can down there in the land of cotton!"   Right.  Even the Iowa caucuses will seem tame ever after.  Here's what stopped everything this morning and made me sit at my laptop for one quick post:

In the 1980s a young Barack Obama -- AKA Barry Soetoro -- was part of a group of students who had been teleported to Mars via something called a "jump room."   He was seen at least twice on Mars, and it's pretty certain that his DARPA appointee, Regina Dugan, was there, too.

So here's Joshua Holland's piece in Alternet, and here's the full story.  Enjoy.  And remember that it's the dawn of a new year and this is just the beginning.  (Maybe you saw this already.  I've been traveling and missed a lot, but don't you just love it?) 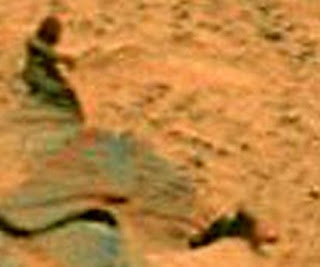 I really do love starting the new year off like this.  It'll go downhill from here, I just know it, but for now it's a hearty hoot and a cup of good cheer.