It's Our Anniversary, Barack's and Mine. I Hope it's not our Last

January 20, 2012.  Today marks the beginning of Barack Obama's fourth year as president.  Three years ago today he stood out in the cold and said, "Starting today, we must pick ourselves up, dust ourselves off and begin again the work of remaking America."  He promised "an open government" and "a new beginning."   I've been around for many televised inaugurations, starting with JFK's when I was but a mere child/adult and, for me,  this one equaled or might have even surpassed that one for good, old-fashioned stirring moments. 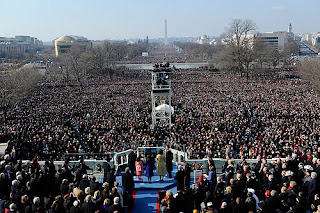 In most circles this has probably gone unnoticed, but today is my anniversary, too.  Three years ago, on this exact day, because Barack Obama stirred my soul and gave me hope, I began writing this blog.  I didn't even think about actually doing it until around mid-morning, when it suddenly came to me that this was one of those portentous days that I shouldn't let go by unnoticed.

I was heady with joy but understandably reluctant to go whole hog predicting the end to all our troubles.  We were not anointing a savior, even though eight years of hell seemed finally to be at an end.  I was trying to remain calm; trying to keep in mind all of the promises made by politicians over the years that had never been kept, either because there had never been any intention or because they didn't know what the hell they were getting themselves into.

I started it this way:


Today is January 20, 2009. Inauguration day for Barack Obama, and it can't have come soon enough. It's true that he's been de facto president since November, 2008, when George W. Bush unofficially, without fanfare or hesitation, turned the job over to him, but today it became official. What a day it's been! They're estimating the crowds at 2 million strong, a sight unseen on any Presidential First Day in modern history.


I have no grand illusions about a rapid return to health for this country, just as I have no illusions about the impact my words will make in the overall scheme of things.  I'll admit that I'm  overwhelmed right now with the events of the day.  I'm feeling more than a little inarticulate and possibly even shy about expressing how it feels to have our country back.   It may not be the best day to start a blog after all.  But start it I have, and now I'll give this day over to the Inauguration of Barack Hussein Obama, America's new president.  The bands are playing, the sun is setting and all's right with the world.   For now.

On January 20, 2010, in the blog marking our mutual first anniversary, I wrote this about last year's blog:


Oh, the joy in my heart as I wrote those words.  Take THAT, you lousy, bloated, insufferable faux-Capitalists.  The Sheriff's saddling up and the posse's not far behind.  We're off to save the ranches!  Widows and orphans, help is on the way!

But lest you think I was totally naive, I also wrote:  'I have no grand illusions about a rapid return to health for this country.'   No, I had no grand illusions, but I did have dreams...[Ed: About the repetition of those words "grand illusions":  I didn't even notice until now that I had repeated them in two blogs a year apart. I must have seriously meant it.]

...I keep reminding myself that the Good Man took on what amounted to a national nightmare.  There were no easy fixes, and nobody pretended there would be.  But I would have slept better this past year if only I had been able to see the president as a 'people person'.   Was he ever that?  I don't know.  We might have made him into our own images, taking much needed comfort in an illusion of our own making.  Maybe he is what he is.  But what is he?  After a full year of hosting him in The People's House we're no closer to knowing where he stands, or, more importantly, where he's going.


I knew this anniversary day was coming and that I would want to write about it, but what would I say as I stood beside Obama saying farewell to Year Two, heading into Year Three?  That all of my wishes came true?  That all of my fears were justified?  That nothing much has changed?  That I now know what kind of man my president is?

I can't say any of those things.   I am at times proud of my president, disappointed in him, enraged by his actions or inaction, fearful of the direction he is taking us.

I'm impatient and feeling increasingly impotent as I'm forced to watch more and more jobless citizens give up, more and more home-owners become homeless, more and more of the sick and dying having to give over their lives to insurance company paper-pushers.  I want the wars to end.  I want the corporate giants to finally understand the consequences and do something about their destructive practices.  I want the GOP and certain members of the Democratic Party to fulfill their obligations to the citizenry--the entire citizenry--in a time of unparalleled crisis, and act like a responsible governing body.  I want our president to be a leader of the people.

Are you sensing a trend here?  Are you thinking that my enthusiasm is taking a downhill slide and that this year should be the one where I finally admit I was wrong about the whole thing?  Well, think again.  After watching the clown shows passing for the GOP debates over the past few months, I'm more determined than ever to help make this current president the next president of the United States.

My God, did you see that mess last night?  Have you been watching the remaining Four Horsemen in action?  Is there a serious contender among them?  Would you really, sincerely want any one of them leading this country?  (If you can answer "yes" with a light heart and a straight face, I think you're in the wrong place.  I would point you to the right place, but I don't think there is one.)

I'm still disappointed.  I'm still impatient.  The slow pace of change is maddening.  But there is no denying there is change in the air, either because of President Obama, in spite of him, or because of forces having nothing to do with him--take your pick--and I'm hanging in there for the long haul.  Finally, the people are awakening.  Our people.  We're on the move and we're not turning back.

I'm with my party and my president and if I have to slap them upside the head once in a while to get their attention, there's a far better chance at success with them than with that other bunch.  (You know that bunch is trouble when the moderates in their party are ostracized and/or banished for thinking even slightly good thoughts; when the ones that remain feel the need to make it clear they're only going after the job as leader of this fair land to make it easier for the marauders to take over completely.) 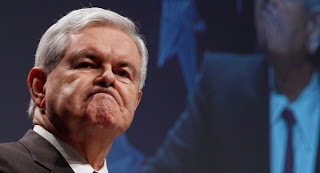 So that's where I am on this, our third anniversary.  Sure, I was hoping the honeymoon would never end and the gifts would keep on coming, but there it is.  Reality strikes.  It hasn't been all roses, but it hasn't been all thorns, either.  Progress has been made.  I'm looking forward to the year ahead, and I'm going to work hard to get Barack Obama re-elected.

In other news:  FactCheck looks at the truthiness of the GOP debate last night.  It's here.

And I found this on their sidebar:

Q: Does Obama plan to deny emergency brain surgery for patients over 70?
A: No. A man claiming on a radio talk show to be a brain surgeon lied about that, and about a meeting of two associations of neurological surgeons, those associations say.

See what we're up against?