Toxic Politics will be the Death of Us Yet

While Democrats temporized, or even dismissed the fears of the white working class as racist or nativist, Republicans went to work. To be sure, the business wing of the Republican Party consists of the most energetic outsourcers, wage cutters and hirers of sub-minimum wage immigrant labor to be found anywhere on the globe. But the faux-populist wing of the party, knowing the mental compartmentalization that occurs in most low-information voters, played on the fears of that same white working class to focus their anger on scapegoats that do no damage to corporations' bottom lines: instead of raising the minimum wage, let's build a wall on the Southern border (then hire a defense contractor to incompetently manage it). Instead of predatory bankers, it's evil Muslims. Or evil gays. Or evil abortionists.

How do they manage to do this? Because Democrats ceded the field. Above all, they do not understand language. Their initiatives are posed in impenetrable policy-speak: the Patient Protection and Affordable Care Act. The what? - can anyone even remember it? No wonder the pejorative "Obamacare" won out. Contrast that with the Republicans' Patriot Act. You're a patriot, aren't you? Does anyone at the GED level have a clue what a Stimulus Bill is supposed to be? Why didn't the White House call it the Jobs Bill and keep pounding on that theme?

You know that Social Security and Medicare are in jeopardy when even Democrats refer to them as entitlements. "Entitlement" has a negative sound in colloquial English: somebody who is "entitled" selfishly claims something he doesn't really deserve. Why not call them "earned benefits," which is what they are because we all contribute payroll taxes to fund them? That would never occur to the Democrats. Republicans don't make that mistake; they are relentlessly on message: it is never the "estate tax," it is the "death tax." Heaven forbid that the Walton family should give up one penny of its $86-billion fortune. All of that lucre is necessary to ensure that unions be kept out of Wal-Mart, that women employees not be promoted and that politicians be kept on a short leash.


The above is from a piece called, "Goodbye to all that: Reflections of a GOP Operative Who Left the Cult".  It was written for Truth-Out by Mike Lofgren,  a former professional staffer who worked on Capitol Hill for more than 28 years, a good portion of which were spent aggressively pushing the Republican line.  No more.  He's had enough.  But it's not as if he's seen the light and gone over to the Dem side.  He's giving them hell, too, the lousy self-serving cowards.

I think what's giving this essay legs -- it's all over the place; Google Mike Lofgren and you'll see -- is the recognition that we're slowly destroying our ancestor's dreams and our grand-children's futures by allowing our elected politicians to lead us down a path we know will come to no good end.

There are hundreds of partisan essays out there blasting both parties up one side and down the other, often with chilling accuracy, but what makes Lofgren's piece compelling is that the insider/author's indictment doesn't spare anyone.  Yes, he thinks the Republicans are worse than the Democrats (which, I admit, opened the door for him here), but his goal, as I read it, is to get us to open our eyes to the dangers we're facing right now, right this minute, that are, incredibly, being fueled by the very people who took an oath to uphold our constitution and work toward the common good.

I spent a good part of this Labor Day weekend looking for programs honoring our unions and our work force.  Precious little could be found, even though that's what Labor Day is all about.  Instead, Sarah Palin's rally was thoroughly covered, as was the Republican candidates' debate in South Carolina.  There was plenty of talk about President Obama's failing numbers and his capitulation to John Boehner over when he could come to Congress to give a speech on jobs.  (It'll be on Thursday, September 8, if you're interested.) 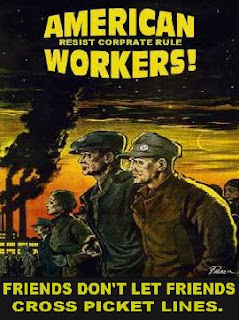 Obama himself gave the traditional Labor Day speech in Detroit, promising to defend the unions and hinting that his upcoming speech will be substantively about jobs.  I'm glad he was in Detroit on Labor Day, and I'm glad he's talking about jobs, but we all know it's going to take more than that.  He's also still talking about trying to work with the Republicans on a bipartisan plan to save the country.  If he can't get past trying to be friends with an enemy who keeps hitting him over the head with evidence of their intent, it's a safe bet things can only go downhill from here.

What Mike Lofgren is trying to tell us is right there in front of our noses:  The Republicans are not our friends.  The Democrats are afraid of them and are trying to save their own skins.  The country is being held hostage by Fat Cats, religious zealots, a media culture bored with real journalism and thirsty for entertainment, and by people who think holding Tea Parties while starving the government is the only way to go.

The politicians the electorate have put in office are either usurping or avoiding their constitutionally endowed obligations.  We're dyin' here and the only jobs crisis they see is their own re-election.